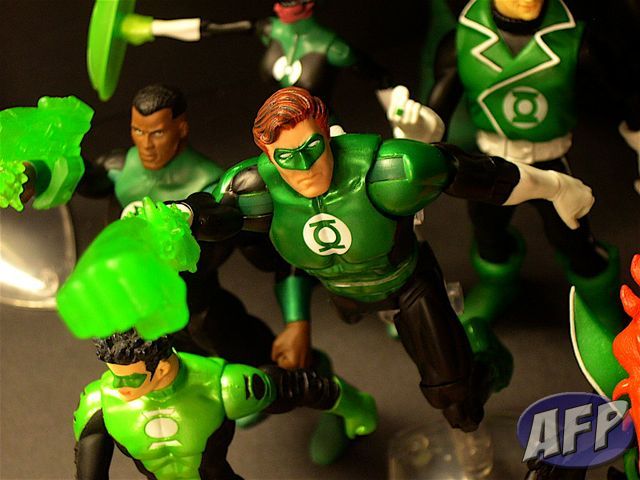 I’m not a big fan of repaints, but I am a big fan of metallic paints on a figure. So when I found out that Toys “R” Us was going to be releasing a modern version of Green Lantern with metallic green paint, I knew I had to pick this one up. TRU had already started their exclusive repaints with the DC Universe Classics All-Star Batman (which I actually haven’t seen yet in my local TRU’s). This week the Green Lantern repaints finally made it into Toys “R” Us stores. Let’s have a look at him! 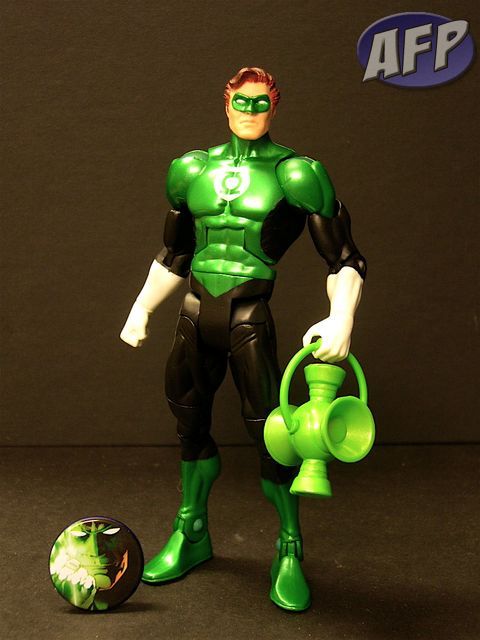 GL here comes with his lantern, a clear blue DCUC stand (which didn’t make it in the pic), and a 75th anniversary pin that all DCUC figures have this year.

He comes in the 75th Anniversary packaging, and you can see below the card back shows his bio and statistics, a profile pic (which shows the old DCUC GL paint scheme), and a list of the other six All-Star characters.

In the turnaround above, I use the DC Direct lantern and base as it matches him really well.

Now let’s talk about that metallic green paint. I love it. It doesn’t exactly match with the dull green that the other DCUC Green Lanterns have, and some people might have a problem with this, but I think this particular repaint looks great. It does fit in well with DC Direct’s Blackest Night figures, if you are mixing toy lines, which is what I have been doing until DCUC gets releases more GL figures.

Hal sports his current comic costume, with a couple of differences. The lantern logo seems to be the old logo. The new one has thicker bars with slanting sides. Also, I was looking at some comic books and in some drawings Hal’s boot tops are slanted instead of horizontal. 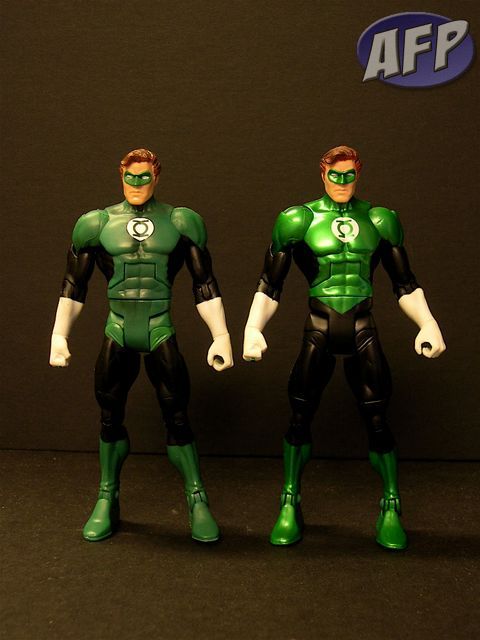 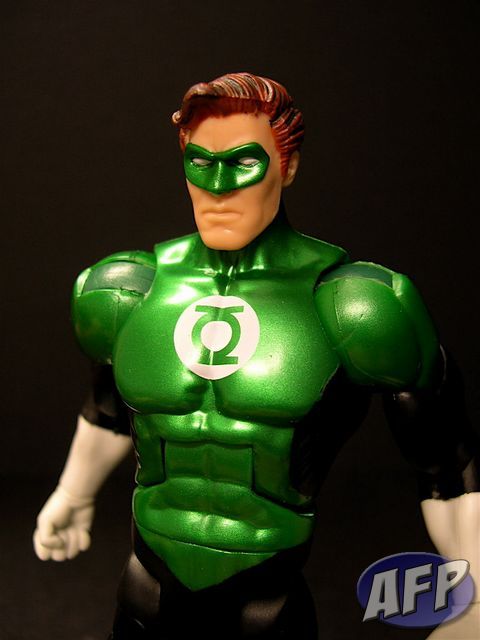 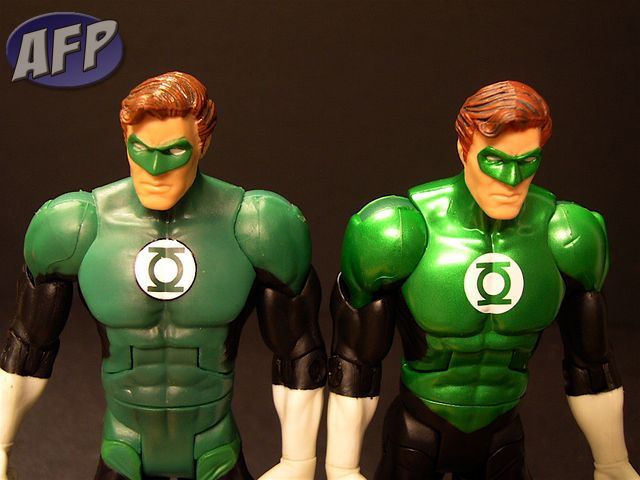 There are also very slight differences in the sculpt between the series 3 GL and this repaint. The differences are very minute. In the pic above you can see the repaint’s shoulders have a slight bulge on the deltoid, where the shoulder ball is. The original has a smoother sculpt. I’m not sure if this change is to create more muscle definition or to create more movement. As far as I can tell the movement is almost the same. The original can lift his arms from the sides higher than the repaint, as there is no bulge to stop it’s movement. But the difference is so small you can barely tell the difference. The shape of the curve on the upper torso, where the shoulders meet have a slightly different shape also.

I have to mention too that the square peg hole in the back of this figure is covered pretty well! 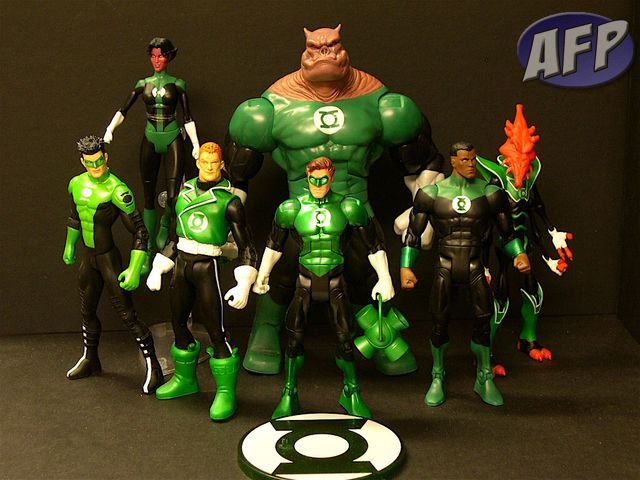 I don’t have a lot of the DC Direct Blackest Night figures, but I do have some of the older Green Lantern DC Direct Figures (Kyle, Guy and Salaak with the Guardians), and this repaint matches really well with those figures. 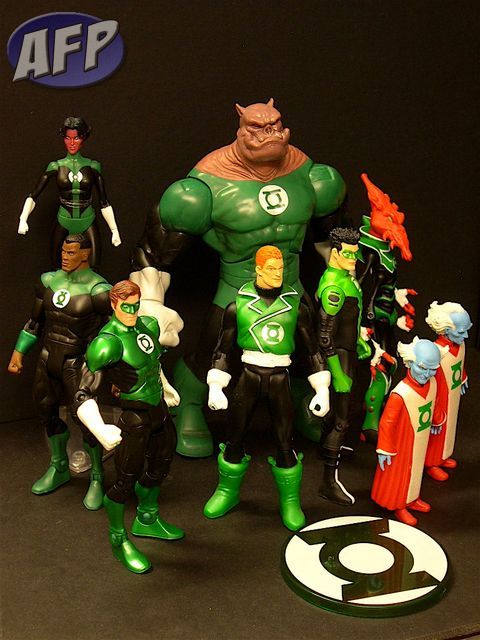 A couple of pics just for fun! Sinestro Corps vs. Green Lanterns! 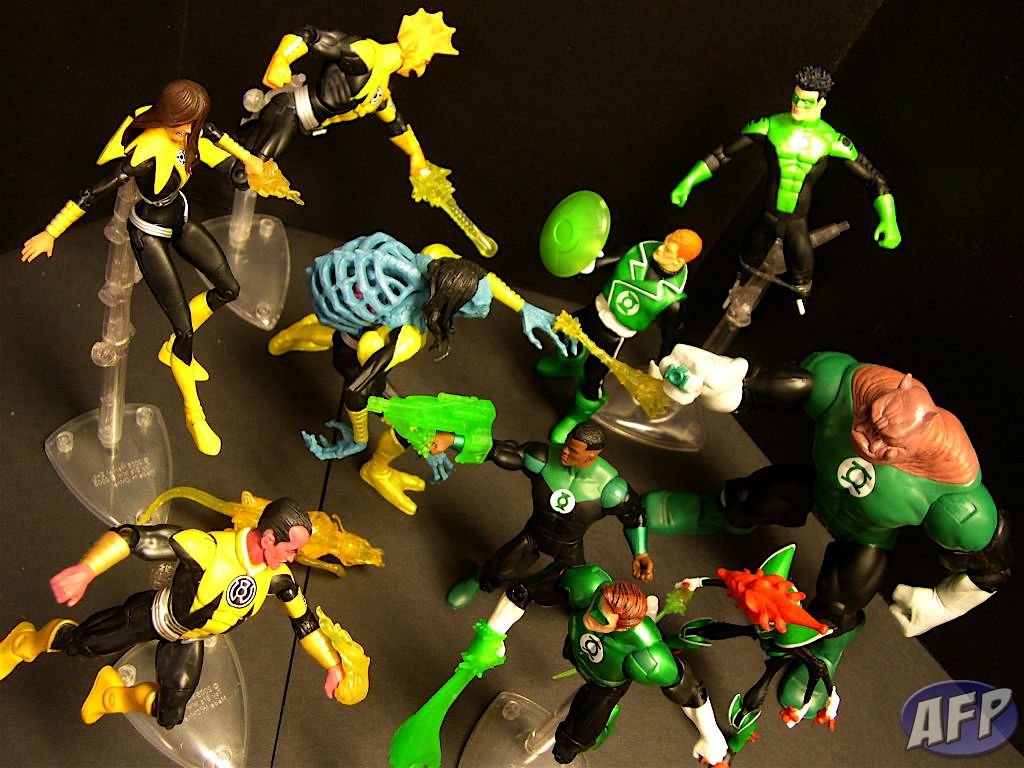 I couldn’t resist picking up this figure when I saw it in the toy aisles this week. I’m a sucker for metallic paints, and it really looks good on Hal. The lantern logo does bug me a bit, but not enough to dislike the figure. I’m also thinking they could’ve ditched the stand and given us another lantern construct, as those stands don’t really do it for me.

Some people might not like the metallic paint as it doesn’t match the other lanterns in the line, I’m actually torn on whether they should’ve used this metallic color for John and Kilowog, but I think this repaint looks really cool. The good thing about it is that if you don’t really want the metallic paints and another Hal, you don’t really need to buy him to complete a Collect and Connect figure, as he is an All-Star. He does compete for DCUC shelf space in your local TRU, but I think with GL’s popularity on the rise, this repaint should have no trouble selling.

Now I just have to see if that Flash repaint coming out soon impresses me the same way this GL did! 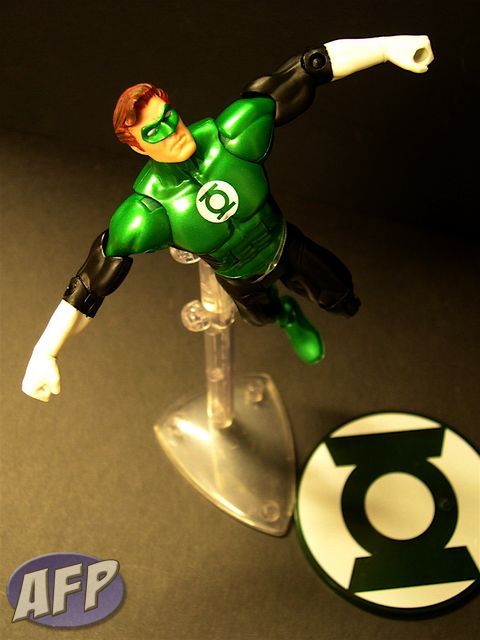