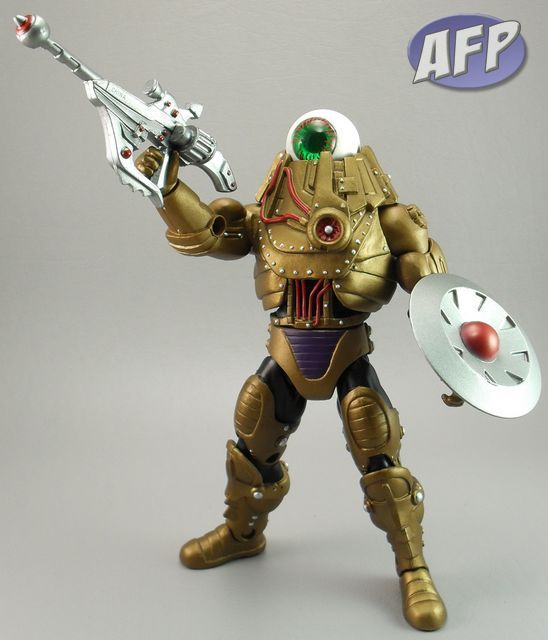 I’m definitely a cherry-picker when it comes to the Masters of the Universe Classics line. My collection, up until recently, consisted only of both versions of King Grayskull (snagged at SDCC) and Battle Cat (thanks to superdoug, a very good friend and MOTUC collector). But when I saw the reveal of Optikk, I thought he looked like something straight off a Silver Age Justice League of America comic cover and immediately wanted 2 of them to menace my growing DCUC JLA.

Optikk was slated for the May MattyCollector feeding frenzy day and like all other MOTUC figures, was gone in the blink of an eye. I didn’t even bother as the funds in my toy buying war chest were low at the time. I must’ve done something right recently though, because Fate smiled down upon me and a fellow Fwoosher offered one up for sale that I was able to grab first. Thanks worldwar_hulk! 🙂 Now I just need a one more.

One of the reasons I cherry-pick MOTUC is that I’m not a big fan of the MOTUC aesthetic, but it looks good on Optikk here. Optikk’s arms (well his left arm anyway) and legs are re-used from Trap Jaw. His upper torso looks to be the standard MOTUC male torso but is concealed by a soft plastic overlay of his beautifully detailed cybernetic armor. The armor restricts the ab-crunch POA a bit but when you look this good, who needs to bend over?

The only POA nit-pick I have is that his right ankle is a little loose and makes him prone to falling when posed in certain positions. The gold finish on mine is not as shiny as the armor looks in the promo pics but I think it gives him a realistic look, like he’s been mercing on dirty mudballs, far out on fringe of the galaxy.

If you can’t tell already, I really dig this big-eyed space mutant.

Optikk comes equipped with 2 eyeball heads (one brown, one green), a Photon Neutralizer and a Mutant Shield. The Mutant Shield is stylish and clips onto his wrist and holds tight but, working on Eternia, you’d think he’d want a shield that was a little more universal in what it fends off than just restricting it to mutants… My wife says the eyeball heads are creepy and my 2 sons think they’re cool, so they definitely go in the Win column. The Photon Neutralizer has a “retro” sci-fi design and fits well and snug in Optikk’s hand.

Overall I’m really happy with my acquisition of Optikk and definitely want to get a second. If Mattel decides to reissue Optikk in the future, I think it would be a great idea to change the color of the eyes. Then if someone wanted, they could have 4 different Optikks, cuz four eyes are better than two. xp