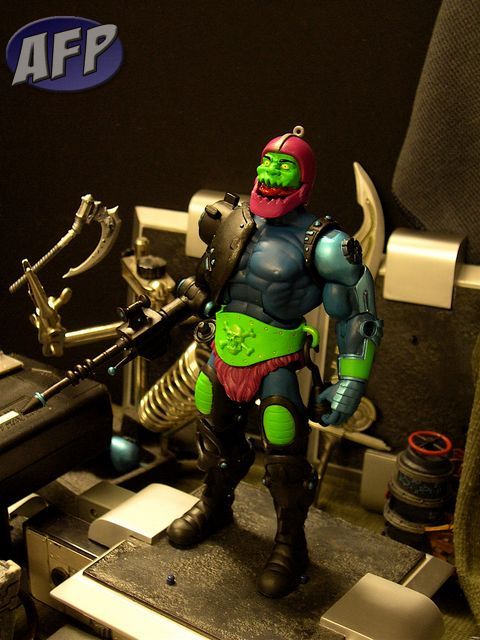 Hot on the heels of the Battle Cat pictorial review, let’s have another look at Trap Jaw (Ron snapped a few quick shots of Trap Jaw during Toy Fair), evil and armed for combat! Another amazing figure from Mattel’s Masters of the Universe Classics line. Just look at that crazy design!

One thing I like about this toy line is that every now and then you get a character with his/her own “gimmick” that keeps the monthly purchases interesting. Tri-Klops had his rotating eyes, Scareglow glows in the dark, and Trap Jaw here has alternate robotic arm attachments. He also comes with alternate parts to create his previous identity of Kronis. 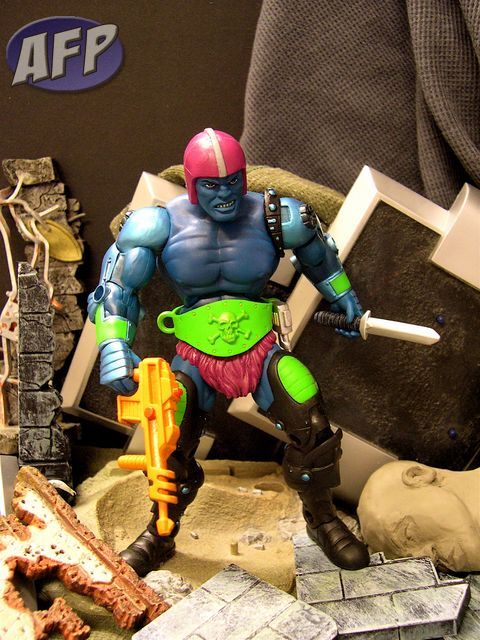 According to the cardback profile, Kronis was an insane criminal recruited by Skeletor (then known as Keldor) during the Great Unrest. Skeletor then broke his arm and jaw after Kronis became too ambitious. Tri-Klops rebuilt him as Trap Jaw and I guess he joined Skeletor’s posse again (maybe waiting for a chance at revenge?). I love that they included the option of being able to display Trap Jaw as Kronis, although mine will most likely be displayed as Trap Jaw all the time, the added display options make the $20 price tag worth it. I’ve read from one of the recent Matty Q and A’s that Kronis was supposed to come with a blaster and a sword (he borrows Webstor’s gun in the pic), but it didn’t cost out in the end. Instead they’re including it in the upcoming weapons pak. 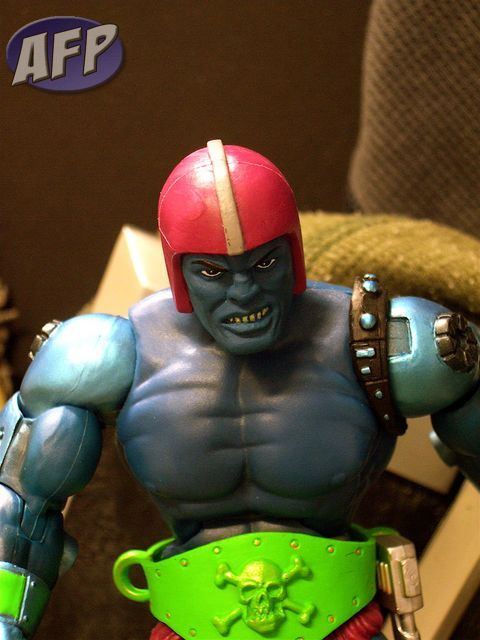 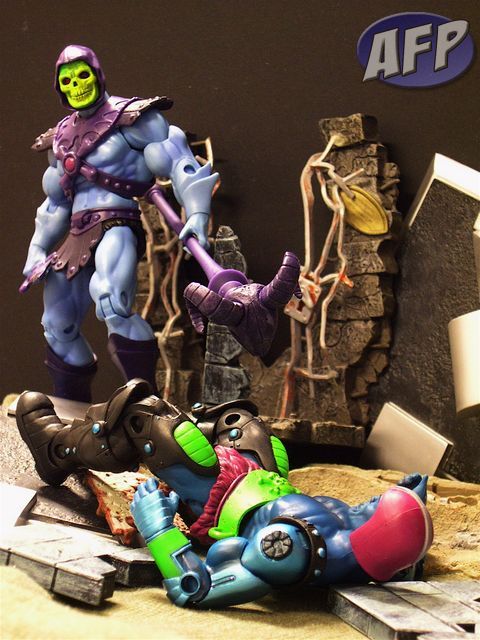 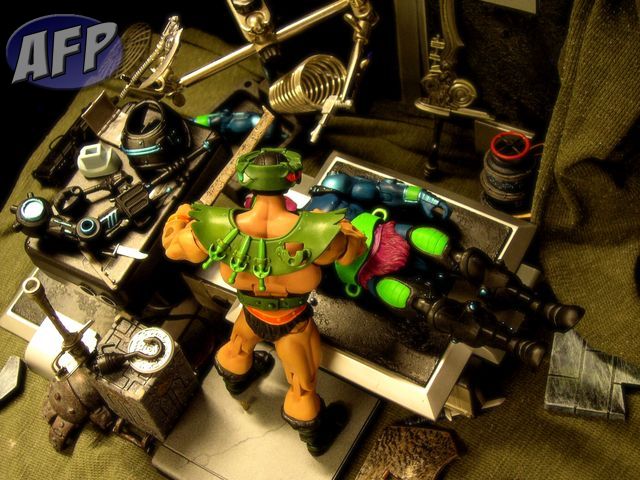 Kronis’ face goes from badass blue to crazy green, open up his “iron jaw” and you see what remains of his mouth. This, added with the yellow eyes, brings his crazy factor up a notch. Tri-Klops had a little fun by adding a metal loop on his helmet.

I like the metallic blue details on Trap Jaw’s black parts, it adds a little pop to those areas. 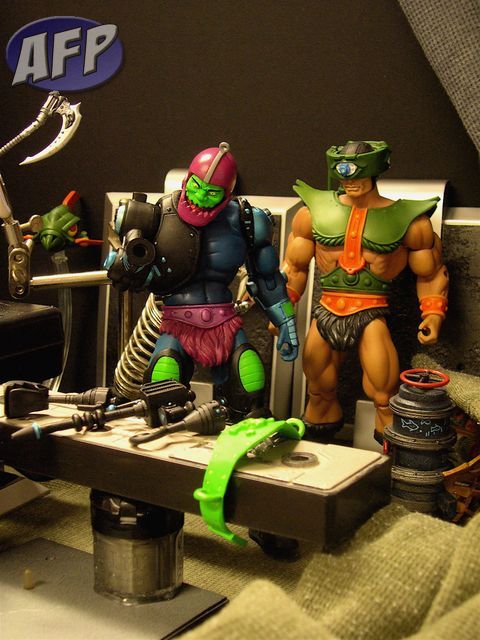 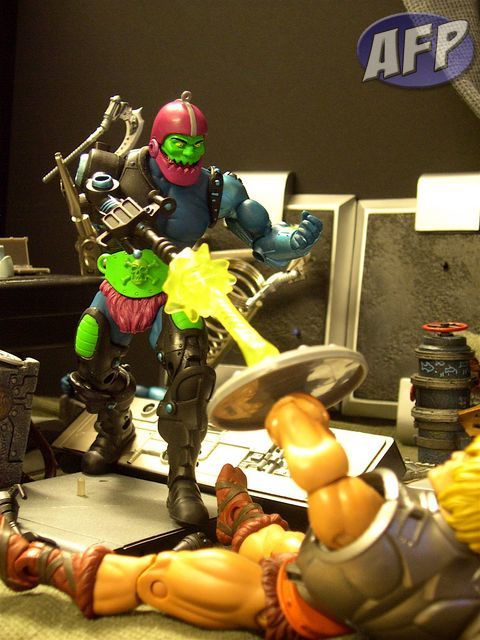 His arm attachments can be hung on his belt, although they do have trouble staying there when you move him around.

Trap Jaw’s robotic arm has all the points of articulation of  his regular arm, so posing is no problem. Now, I did try posing him on a zipline using his “helmet loop”, but he fell and for a moment I thought that I had broken the loop. Thankfully it didn’t break, but I didn’t want to test it again as the loop is made of a softer plastic. 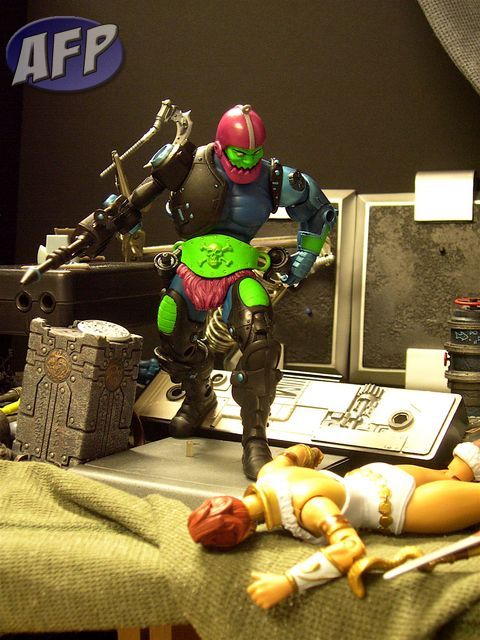 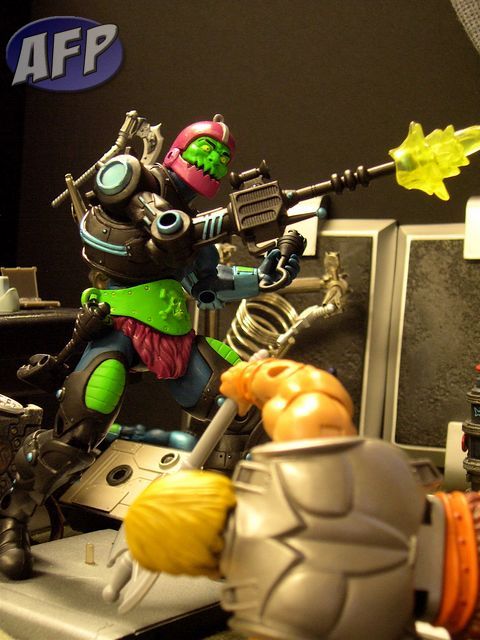 So there you have it, another great addition to the Masters of the Universe line! I have to say there’s a lot of “play” value with this toy, with all the alternate parts included. With the short time that I’ve had him I’ve changed him from Kronis to Trap Jaw a couple of times, and I also keep changing his robotic arm attachment. Also worth mentioning are the new leg and arm sculpts, most of the previous releases use the same body parts and it’s good to see some variety added to the line.

For those who missed him last February 16th, he’ll be available again in the fall. Hey, no Masters of the Universe collection can be complete without crazy Trap Jaw! Now to see if I’ll have any success ordering Moss Man this month…

8 thoughts on “Masters of the Universe Classics Trap Jaw”