Damn, how I wish I was going to SDCC! I’ve been the past 3 years and it was a blast every time! Alas, my situation is such that I am unable to attend this year. 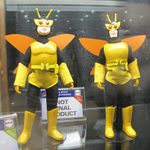 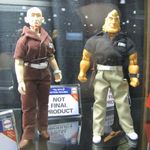 I’m very intrigued to see what Bif Bang Pow! has in store for The Venture Bros. line. I’m a big fan of the show and was very excited earlier in the year when I heard they had gotten the license to the characters and were making articulated action figures of Rusty, Brock, The Monarch and Dean. Unfortunately the pics of the early prototypes left me more than a little cold. But they were “early” prototype pics, so I’m hoping that BBP! has tweaked the designs to bring the figures more in line with the art of the show. The pics of the SDCC Exclusives of Monarch’s minions (they like that better than “henchmen”), 21 and 24 have given me reason to believe that BBP! has done so. The fact that 21 and 24 are SDCC Exclusives is just another dagger of regret in my heart from not being able to jet out to the left coast this year.

DC Universe Classics reveals, that’s the big one for me and especially to find out the finalized line up for DCUC 16. Recent ToyFare reveals are pointing to some validity behind the rumors that are flying all over the toy forums, so I’m most eager to see if we’re actually getting a DCUC Dick Grayson Robin and what he is going to look like. I’ll bet that Mattel will be displaying production models of DCUC 15 too and can’t wait to see how OMAC and Jack Knight Starman have been translated into 6 inch form. OMAC is a big one on my “Want List” and the prototype pics of him have me a little nervous. I shouldn’t be, I’m sure the Horsemen won’t let me down. What else could I expect from Mattel about DC Universe Classics at SDCC? I’m a glutton, so how about a reveal for DCUC 17 as well? That’s not too much to hope for, is it?

Have fun, all you toy hounds heading to the show, and give my regards to San Diego!