Ebonhorn was kind enough to send me some pictures and a review of the ThreeA Toys Nom de Plume, which was an exclusive figure for people who purchased the ThreeA 2010 Membership. He’s been waiting patiently for me to publish it since before San Diego Comic-Con, and is bummed that Pabs, the slowest reviewer in the world, was able to publish pics of his Blanc de Plume before I could post this. Sorry and thanks, Ebon! 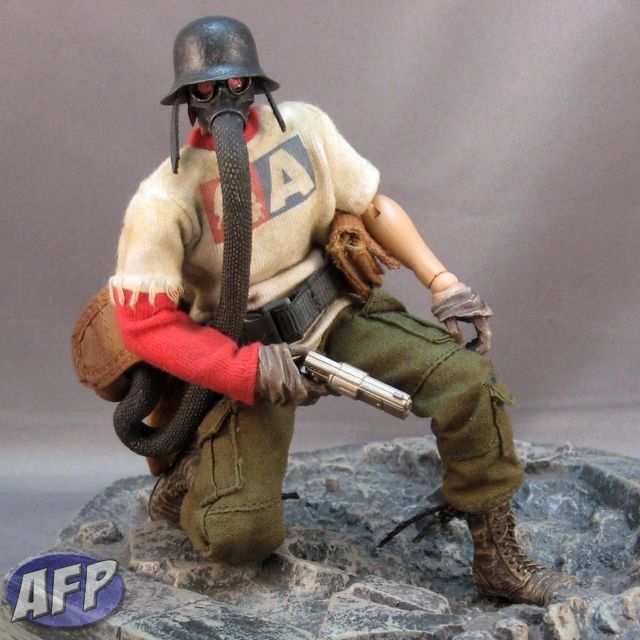 A few months ago, a picture surfaced showing off several unpainted 1/12 scale WWRp robots from ThreeA Toys. However, something else caught every one’s attention – a 1/12 scale human body. The fan base went crazy wondering what it could be. It was not long before our questions were answered – ThreeA had developed a 1/12 scale version of their 1/6 scale figure body. In keeping with tradition, the first 1/12 scale human figure would be Nom de Plume, the very figure that the ThreeA logo invokes. Three A announced that people who bought the ThreeA 2010 membership would receive Nom de Plume as an exclusive surprise. I missed out on the membership but had a chance to get him and did. The big question – does he match up with the high expectations set by the 1/6 scale figures? The quick answer – he certainly does.

Fans were wondering if the ThreeA body would be as fantastic at half its size, and the answer is yes. No articulation has been lost in the transition from large to small scale. The only place where there is no articulation is the lower leg. The lower leg has a peg which slots into the boot. So you can spin that portion but there is no up/down or side to side on the ankle joint. Otherwise you can get him into most any pose you can think up. 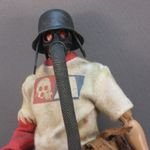 The one place where 1/12 scale figures tend to fail is in the cloth goods department. Usually the seams are enormous, the stitching is highly noticeable, or the clothes just do not fit properly. Thankfully, this is not a problem with Nom de Plume. The company took their time trying to create really nice cloth goods for a figure of this size. It paid off. The shirt does not hang weirdly or seem over sized. The pants are particularly fantastic with lots of stitching work that is a good example of the quality of work. The belt is very nice with a buckle that is a great size for the figure. The one area that there is a little problem is the velcro on the pouches. The velcro pieces are small, so you have to press a little to get them to connect and lock together. It’s not a huge issue, but it’s something to look for. 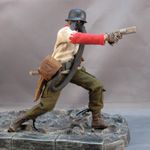 The parts that are painted are very nicely done. ThreeA is known for the dirty look and Nom doesn’t fail. The helmet, boots, gasmask, and air tubes have that suitable used look fans have come to know. Another nice feature is the red lenses in his mask. It has a great look that does not just hide the eyes, but really enhances the look of the figure. 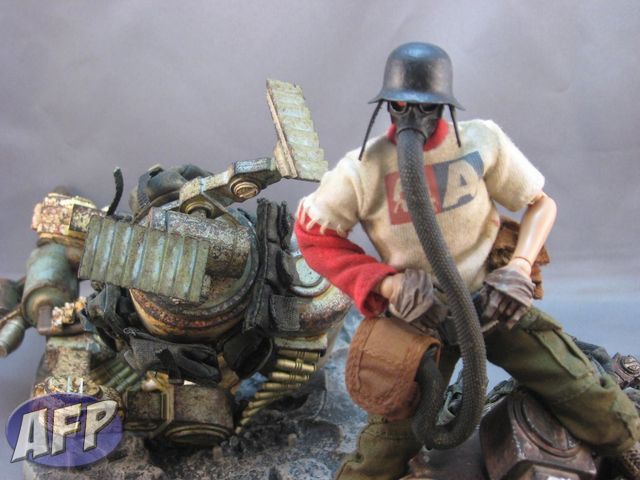 For their first foray into humanoid figures at this size they have done a fantastic job. Already planned for release is Blanc, Noir, Gebi, and DIY de plume. These will use the same figure body but have different paint schemes. Blanc is an exclusive with a huge boxset that was on order in March. [Editor: check out Pablolobo’s review of the Blanc de Plume.] It is yet to be seen how Noir, Gebi, and DIY will be released, but the fans are looking forward to getting him.