I deputized Hagop for this write-up of the Green Lantern Classics Top Ten results. But I made him give me back the Brown Lantern ring when he was done. Thank you, Hagop!

And thank you to all of you voters – we had over six thousand total votes, making this the most popular Top Ten to date.

The world of Green Lantern has probably never been more popular than it is today. That world has also expanded greatly over the last few years, with story arcs like the Sinestro Corps War and Blackest Night. If there was any doubt about that, just take a look at our Top Ten; just over half of the winners aren’t even Green Lanterns at all! Whoda thunkit?

Without further ado, let’s get to the winners.

We start of with a tie. It was a heated campaign that went all the way down to the wire, with positions switching back and forth even in the final hours of voting. Stel and Brother Warth were right in it until the end. But when the poll closed, Soranik and Saint Walker each had 168 votes to share the #10 spot.

She may be Kyle Rayner’s love interest and Sinestro’s daughter, but make no mistake – this woman stands on her own. Soranik is tough, smart (a neurosurgeon, for crissakes!) and a Corpsmen as capable as they come.

I think her chances of getting a figure are pretty high, considering she’s become one of the primary GLs in recent times, and her costume would need almost zero new tooling.

“Please tell your Master Sifo-Dyas that we have every confidence his order will be met on time and-” Er—wait. No. I mean, “All shall be well.” Yeah, that’s it.

Walker: Odym Ranger is visually dynamic and was a key player in Blackest Night. If you can only have one Blue Lantern, you probably want him. I’ll be truly surprised if he doesn’t appear in the second wave of GL Classics.

Arkkis had a relatively short life as a Green Lantern, dying in battle just six years after he was introduced. He’s had some minor exposure in DC’s animated programs, but I think his appeal endures because of the 1980 story in which he first appeared. At the time, alien GLs had been around for twenty years and characters like Tomar Re and Katma Tui had been given some healthy character development as supporting characters. But there hadn’t been a story about an alien GL that didn’t involve Hal, John, or some other lead character. “The Trial of Arkkis Chummuck” by Bob Toomey and Alex Saviuk ran as a back-up feature in Green Lantern v2 #130-#132. For the first time, you have a Green Lantern story with no recognizable characters. And what a fun, original, and compelling story it is! It showed DC that such a thing was possible, and they followed up with more Tales of the Green Lantern Corps stories in future issues. It could be argued that Arkkis is really the foundation for most of the cosmic GL stories that have followed.

As a figure, Arkkis would be surprisingly challenging. The shortcut, cost-saving route would be to re-use most parts from a figure like Hawkman or Martian Manhunter. But to really do Arkkis right, he needs an entirely new sculpt. The proportions of his limbs are non-human. More like an ape. And his trunk really should be thicker than someone like Hawkman or J’onn. But don’t get carried away, Mattel! – He should be a single carded figure and not an overly big C&C like Solomon Grundy.

Mr. “necessary yellow impurity” himself. But which version? I mean, this guy/thing has had some pretty divergent looks. It’s not a question of just throwing out a simple chase variant. The pic we featured in the poll is his Yellow Lantern crab-mask ensemble. But his most recognizable look is “Evil Hal Jordan”. And there’s also his true “yellow energy bug” look…

All I’m gonna say is he placed #8 in our poll. I’ll let you guys tear each other apart on the message boards about which version should be made as a figure.

You don’t want to mess with this guy because he’s basically Superman (or at least Mon-El) with a power ring. He could probably take out anyone except Batman (time to prepare, and all that). Actually, I’m sort of confused as to whether or not he’s alive. He died fighting Mongul’s corps on Daxam, right? But he’s still alive in the 31st Century. Is Booster Gold involved somehow? Ah well, you guys will straighten me out on the boards, I’m sure. Yat could easily make use of a repainted Hal Jordan buck and he’s a good candidate for a 50/50 variant with his Ion costume. Mattel: please no 31st Century version with the goofy hair.

Salaak is a must. I mean, he’s the Lantern of Space Sector 0. He’s the Green Lantern of frikkin’ Oa. Doesn’t that kind of make him THE Green Lantern? Plus he was a member of Earth’s “Green Lantern Corps” in the 80s when the galactic corps was disbanded.

We got a sneak peek of a Ch’p figure at Comic Con. Could he be a pack-in for a wave 2 Salaak figure? Let the rumors begin!

The extremely limited edition 30” Anti-Monitors that were raffled off at Comic Con ’09 are heavily envied by collectors. But if they ever mass produced this guy, no way in Qward would he be 30” tall. Probably more like 14”. If you’re lucky. Do you still want him?

DC Direct has already made a really great Larfleeze, but you greedy bastards want another one. You have to have him! In DCIH too! And Action League! ALL of them!

Seriously though, the prospect of a GLC Larfleeze is an interesting one. The different artists that contributed to the Blackest Night arc all had a noticeably different take on Larfleeze. It will be interesting to see what control art DC selects for a Mattel Larfleeze, and how the Four Horsemen interpret it. He has the potential to be one of the all-time gems of the DCU line, or to be a big disappointment if he doesn’t look just the way the fans imagine him.

It doesn’t get more central to the Green Lantern story than Carol. She’s Hal’s soul mate. We definitely need both the classic and current versions of her Star Sapphire get-up. However, as tempting as it may be to create her skin tight costume by way of paint masks alone (a la DCUC Starfire), I would suggest that Mattel go the distance and shell out for some new sculpting. Carol deserves it. And the figure will look cheap if they go with paints only.

Assuming Ch’p is on his way, all we need are Arisia and Salaak to join Hal, John, Katma, and Kilowog in completing our Englehart/Staton Green Lantern Corps. And let’s face it – the Corps we have now is a sausage fest. We need more women! Like many other Lanterns, Arisia can re-use a lot of existing parts and tools, so I think she’s a lock for a figure, either in the GL Classics line or even in the main DCUC line. [Sidebar: Soranik and Arisia show that you want some female Lanterns. One can’t help but wonder how this list would look if Jade had also been a choice instead of a character like Gretti, who got zero votes.]

Atrocitus led from wire to wire. He never fell from first place at any time during the poll. Without question, he is your most wanted Lantern character. Some may feel Geoff Johns to be overrated, but one thing he does well is villains. Atrocitus is the most vicious, unyielding, sadistic foe of the Corps… and yet he’s empathetic in his own way. And interesting. A characteristic that can’t be taken for granted in comics today. He really needs to be a C&C though because he should be roughly the same size as our DCUC Kilowog. 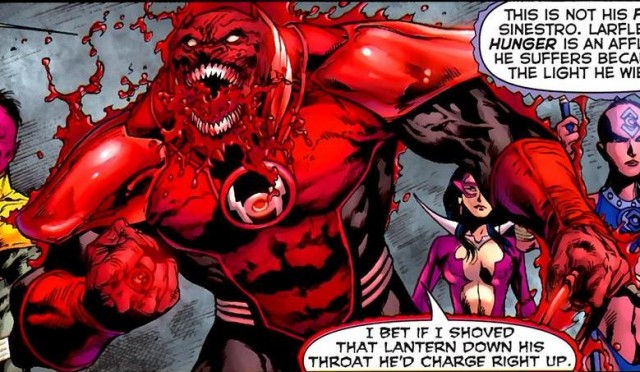 So what conclusions can we draw from these results? At first glance, I thought the common denominator was a bias toward modern characters over the Silver Age. But I don’t think that’s quite it. After all, gimmicky figures like Indigo Ray Palmer or Duel Eknhams didn’t make the list. No, I think what these ten characters have in common is that they have all been well written. Sure, some of them are of obvious importance, and some are visually exciting. But those things can be said of a lot of others that didn’t have the support to make the top ten. We’re attracted to these characters because they have been richly drawn in pictures and in words. Their personalities spring to life off the page, and so we’d like to see them in three dimensions right there among our other 6” friends.