Hey Mattel fans – it’s time for the newest Q&A session of Ask Matty!  Thanks to Toy Guru and the gang at Mattel, and happy Friday!

1) You’ve told us that a Masters of the Universe Classics vehicle is planned for late next year. Have you started the product design process? How has the Four Horsemen’s Battle Ram influenced what you will produce for the line? 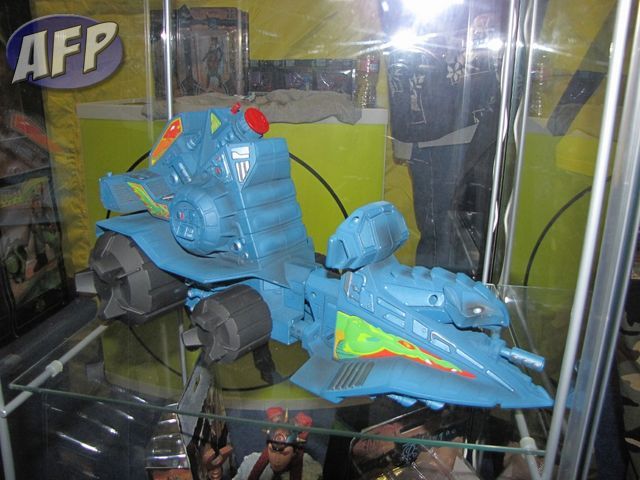 We have begun preliminary design work. The Horsemen “pitch” vehicle was more of there way of saying, “We can do vehicles too,” since they did not do the vehicles in the 200X line. We are excited to have them on board as we review which vehicle to do!

You can find more pics of the Battle Ram prototype in our SDCC 2010 coverage of the Four Horsemen.

2) We’re very excited about Green Lantern Classics, and the Green Lantern Classics Top Ten we held recently is one of the biggest fan polls we’ve run. If demand for these figures is through the roof, how easy will it be for you to produce a third and fourth series next year? When would you know if you wanted to extend the line?

The 2011 line is locked in with only two waves. (The Horsemen can only sculpt so much at once!) However, there will be a “third” “Best of Wave” later in the year, timed around the GL movie launch, which will feature re-releases of some previous GL figures.

Be sure to come back tomorrow for the start of the Masters of the Universe Classics Top Ten poll!

3) A couple of questions about DC Infinite Heroes, which you’ve told us would continue next year as a Green Lantern line in the 4-inch scale. First, will it be movie characters only, or will you have the opportunity to make comic-based figures too? Green Lantern only or broader DC Universe characters?

We are still waiting for retailer commitments before we announce what style these figures will be in. Stay tuned!

4) Second, are you striving to make the Green Lantern 4-inch line consistent with DC Infinite Heroes in sculpt and articulation, or will this be an opportunity to redefine what Mattel offers in its DC lines for 4-inch figures? If there will be changes, can you give us an idea of how you’re thinking about changing it up?

Our goal is to both make future 3 ¾” lines a step up in articulation and detail, as well as a nice blend to work with previous lines. But what style (movie or comic) depends on retailer interest.

5) We’re really curious as to what is going to be part of the big blow-out sale you have planned for MattyCollector.com at the end of November. Which of the toylines will be included? Can you tell us what’s items will be part of that? If not, when can we expect to find out?