Oof. Exclusive Hot Toys figures available at Christmas, only in Japan? This will put a dent in many holiday budgets.

We’ll have a closer look at the Michael Jackson and Batman Begins figures up shortly.

Many fans may have already known that this year is the 10th anniversary of Hot Toys. To celebrate our 10th years of craftsmanship and quality, we will be having our first-of-its-kind fabulous anniversary event during Christmas!

Amid guessing of the 10th anniversary special last week, here we are proud to unveil our 10th ANNIVERSARY EXHIBITION “THE 1/6TH SCALE RENAISSANCE DECADE” which will be taken place in Tokyo from Dec 24-26, 2010! 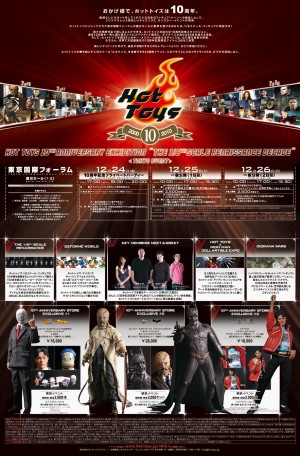 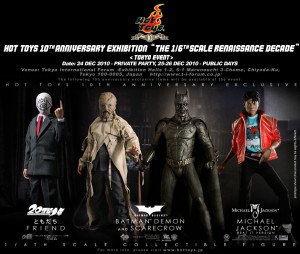 What’s more, there will be Hot Toys 10th anniversary exclusive items which will be available at the event:

Come join us to celebrate the success of Hot Toys and enjoy the precious moments with us there!

More exciting elements will be available there. For more info, please stay tuned with www.hottoys.jp.