The last we saw of him, moldie13 was out in the desert shooting pics of the WWRp Armstrongs. We loved those pics so much that when he showed up with the Heavy Bramble from the big brother World War Robot line (WWRp is a 6-inch scaled line, while WWR is the original 12-inch scaled line), we asked him if he’d share some more pics with us.

The day of New Year’s Eve, the buzz started over at the threeA forums about the WWR Heavy Bramble MK 2.5’s finally hitting in Southern California, which spells a drop in Vegas on the same day – and I had to go to work… which meant that if I missed the delivery, I’d have to wait a few more days for a robot I’d already been waiting for months to show up. “It’s worth a shot,” I thought to myself. So I ripped off a post-it note and scrawled “LEAVE PACKAGE HERE” and printed and signed my name, got on my bike, and pedaled to work.

New Year’s Eve Twenty-Ten – the end of the worst year I can remember having. The story’s long enough already so I’ll spare you the rest of the details and get to the point – it worked. One big-ass box from threeA Toys sitting on my doormat. The year would end with a hunk of Heavy Bramble happiness after all. 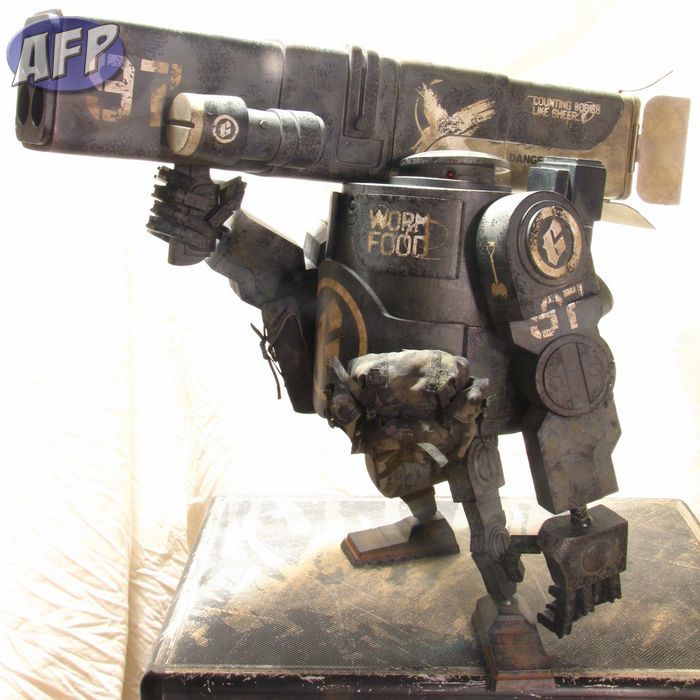 The Heavy Bramble sports all the articulation we’ve come to expect from the WWR series. Ball-jointed head, ankles, wrists, finger bases, hips and double ball joints at the shoulders. The elbows and knees and finger joints are all hinged adding up to one hell of an articulated bot.

Of course it’s worth mentioning that due to the scale of this bot, the weight is significant. The Heavy Bramble is a “one-sixth scale” or “twelve-inch scale” figure, and it measures just under fourteen inches from head to toe. And though his core is PVC, and he’s hollow, he’s still heavy, and a challenge to get to stand up in the dynamic poses I tend to prefer. Of course it can be done, and in my opinion, the effort’s worth the pay-off. Aside from the heft of the torso and its impact on balance, the only other significant gripe I have about articulation is that the shoulders, though double ball-jointed, are mounted too close to the body, which tends to “pin” the arms a little close. Don’t expect your Heavy Bramble to be doing any “iron cross” poses on your olympic team. But then again, this is a common design in a lot of the bots. The WWR Dropcloths are largely the exception to the rule, as their arms have a much greater range of motion by comparison to almost all the rest of the bots in the World War Robot universe so far.

The color scheme (or “colorway” to the faithful) of the Gravedigger was hands-down the only choice for me. If you’re uncertain as to why, I’m not gonna to bother going into it. Suffice it to say, we’re a bit “kindred spirits.” The graphics are keen as hell and appropriately menacing. The weathering and grime are just right, right down to the ruddy filth on the feet – just like he’s been playing in the same sandbox as myself. 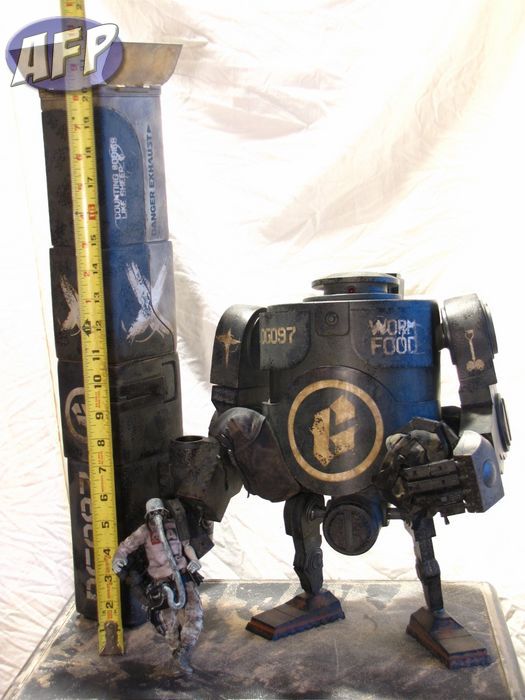 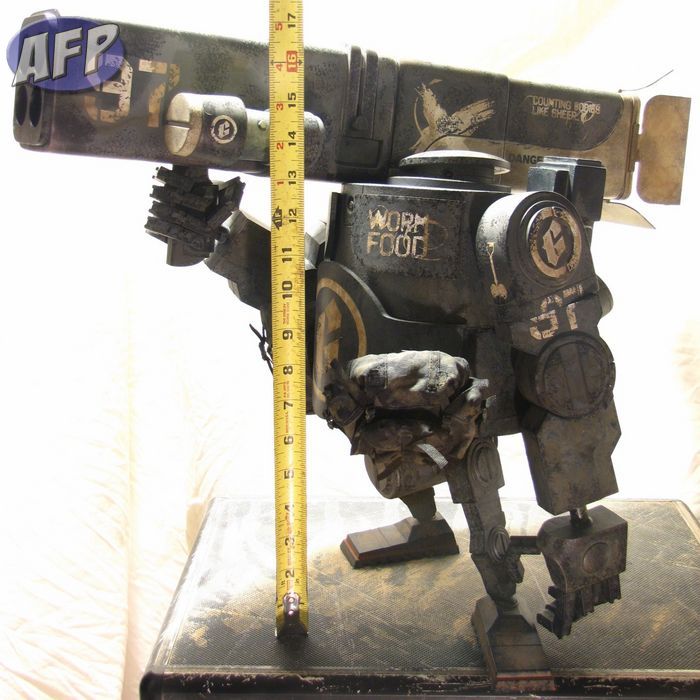 The WWR Heavy Bramble Mark 2.5 is a great addition to my own collection. He’s just the right kind of bot, and unique for my collection in his size. Though technically he’s not the same scale as most of the other robots from WWR that I own, it doesn’t matter. He fits right in, in his own beastly way. 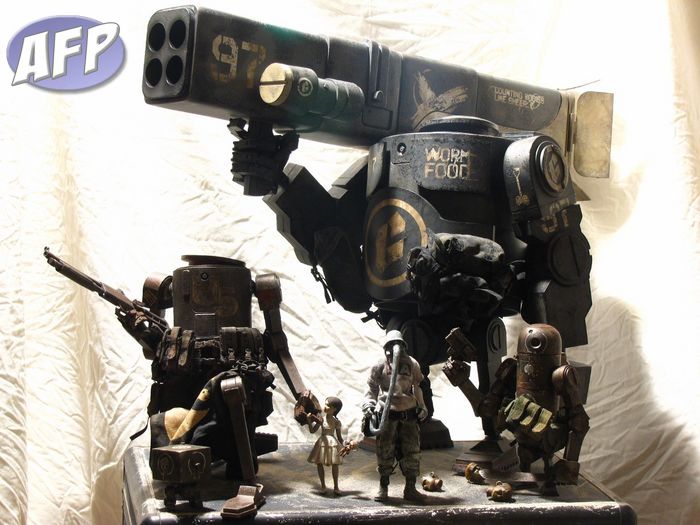 Aside from the Gravedigger, the Heavy Bramble has been released in four other “colorways” so far – Deimos Liberator, Marine JEA, Bromwich and Daywatch (all exclusive to Bambaland, the official threeA online store). Others are slated to be offered through retailers, but aside from tiny glimpses in the background of found online photos, distinct “colorways” have yet to be named.

I’ve claimed in previous reviews that WWRp (world war robot “portable”, the “six-inch” or “one-twelfth” scale version of the WWR universe) was the future of six inch figures. I won’t rescind the claim. I’ll add to it – WWRp is the future of six-inch figures, and WWR is too.

Welcome to the war. Grab your bots and head to the frontlines. 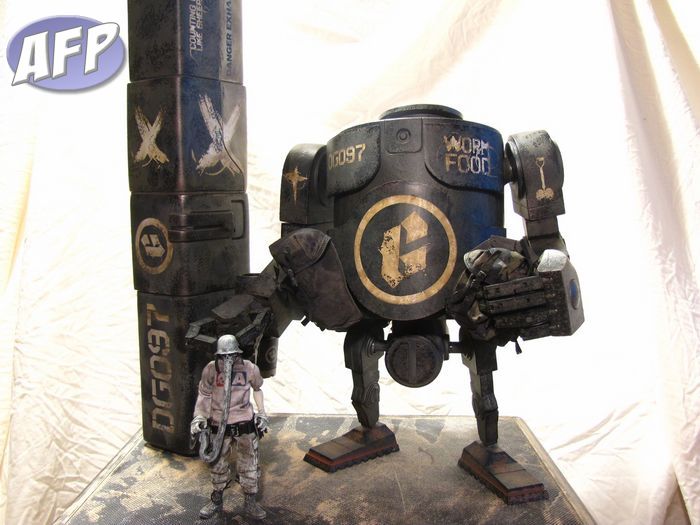 >> Check out more of moldie13’s pics in the WWR Heavy Bramble MK 2.5 album