Guest reviewer moldie13 is back, this time with a review of the exclusive Red Under the Bed set from the World War Robot portable line from threeA Toys. His previous AFP reviews include the WWR Heavy Bramble MK 2.5 Gravedigger and the WWRp Armstrongs.

In mid-February of last year, threeA Toys, through their online store, bambalandstore.com, put their WWRp (1/12 or six-inch scale) versions of their “Large Martin” robot design up for sale in a few different varieties. Yhere were three sets offered, each set with one Large Martin (with a massive shoulder mounted cannon over it’s right arm), one Damn Large Martin (with a cannon over EACH arm), and an RPG Bramble. You could buy each set individually, or you could drop the cash for what many threeA followers considered a bit of a grail at the time – the “Three Times Three” set, with one of each set combination, and the added bonus of an exclusive WWRp version of Blanc de Plume! that’s nine robots and one human figure total. 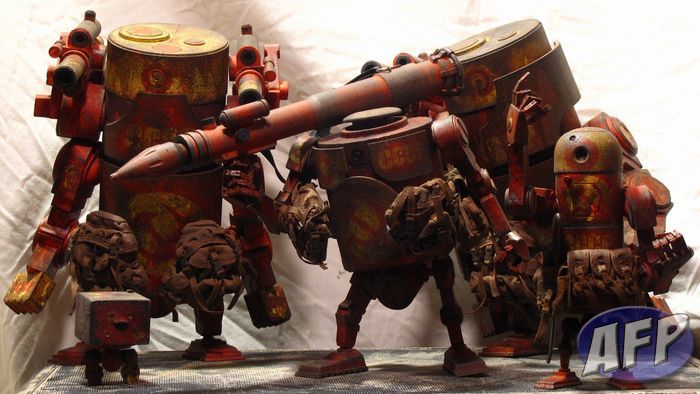 Folks were excited when these were announced, but what really got the blood pumping was the declaration that two additional sets would be offered in very limited numbers – the “Frosty Choad” set and the “Red Under the Bed” set, each containing one Large Martin, one Damn Large Martin, one RPG Bramble, a Bertie and a Square. and each essentially offering a full “squad” of one particular “colorway” (the threeA faithful term for color theme).

The standard Large Martin sets shipped out to eager collectors late last year, but the exclusive “Red” and “Choad” sets have just now begun to land in the hands of some of us eternally-patient WWR collectors.

When the Large Martin sets finally arrived a few months back, upon opening and exploring my sets, my overall opinion of the Large Martin figures wasn’t particularly high. While it’s no surprise that the robots are designed to be big and clunky looking, I can’t seem to get my desired level of “character” out of their articulation. With the Red Under the Bed set, the only element that improves my opinion on the Large Martin robot design is the “Soviet” color theme and the cryllic lettering.

The Large Martins have ball-jointed hips and ankles. The shoulders are double ball-jointed, but limited and somewhat shallow. There are swivel joints at the head, wrists and cannons and pivot joints at the elbows and knees. The amount of articulation of the Large Martins in itself isn’t in question necessarily – it’s an impressive quantity, to be sure, but the range of motion is just really lacking for my tastes.

The Bramble is the standard model that we’ve seen before in the WWRp universe, with articulation allowing for generally broader stances and wider arm reaches than most of the other robot designs in WWRp. it breaks down with ball-jointed shoulders, hips, neck, ankles, wrists and the base of the fingers, swivel at the waist and pivot joints at the elbows, knees and finger joints. Plus he comes with an “engine-style” back piece and his big ol’ RPG cannon. My personal preference for the Bramble model is the original “gatling gun” version, as I tend to think it has a more “bad-ass” feel to it, but any version of the Bramble is pretty damn nice to have. It’s the design that laid the groundwork for the 1/12 scale WWRp line, and they did an amazing job right off the line with the this bot. It set a standard.

The Red Bertie is my favorite bot of the set. But of course that wasn’t a surprise to me – the Berties are my personal favorites of all the bot designs released so far. This Bertie is essentially exactly the same design as some we’ve seen before. Where most of the previously released Berties toted the three barrelled gatling guns, some of them packed pistols, and in the case of the lone “Dirty Deeds” Bertie, he got to bring a machete along for the gig. The “Red Under the Bed” Bertie has the same “engine style” back piece as the single pack Dirty Deeds and Medic Berties, but his sole weapon is his sabre. All the bots in the set, as is common, come with several fabric pouches that hook around their midsections. The Bertie comes with a pouch belt which includes a pistol holster, but alas, he comes with no pistol.

The Bertie articulation breakdown runs thus – ball-jointed shoulders, hips, ankles, wrists, and base of the fingers, swivel joints at the “neck” and “waist” and pivot joints at the knees, elbows and finger joints.

Finally we have our little friend, the Square. Cute. Not much else to say about him. He’s cute. He’s got ball-jointed hips, swivel “neck” and pivoting knees.

The Soviet style theme of this set is striking, to say the least. Each bot displays the good ol’ hammer and sickle and each one is numbered one through five – the Damn Large Martin is “one”, the Large Martin’s “two”, the RPG Bramble’s “three”, the Bertie’s “four” and the little Red Square’s “five”. In the “Frosty Choad” set, each bot has his specific name painted on him. I suspect the communist nature of the “Kruschev Memorial Guard” is what prompted the numerical designation, as opposed to individual names, though somewhere on each of the red bots the cryllic version of the name “Nikita Sergeyevich Khrushchev” – a prominent Soviet leader who tended towards more liberal communist policies with the hopes of bettering the ordinary citizery, incidentally – appears.

The set in itself is one hell of a sharp looking collection. As you’d expect the bots compliment each other extremely well. The starkness of the reds and yellows and the blunt, no frills traditional Soviet decal designs slathered with the crust and grime we’ve come to expect from our WWR world, come together extremely well. 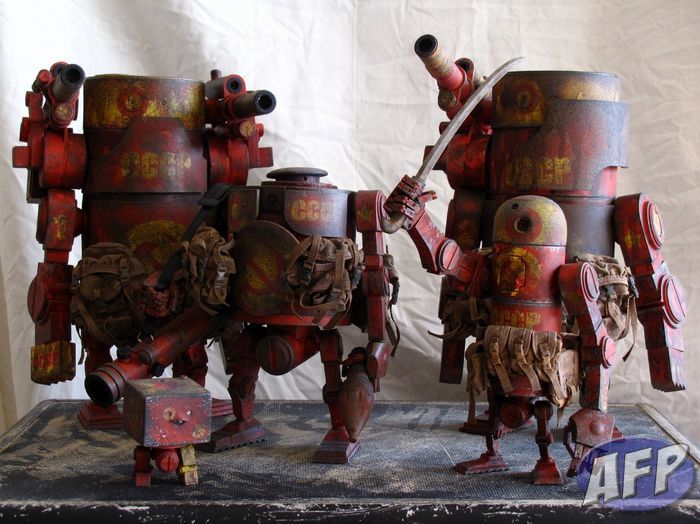 Oddly enough, I find myself drawing a strange parallel in my appreciation for this particular set – while I may find fault in individual design aspects of some of these bots, when placed together, I find that the sum is greater than its parts.

And there’s your lesson in communism, kids.

WWRp. If you’re not on the wagon yet, you’re wasting your money.