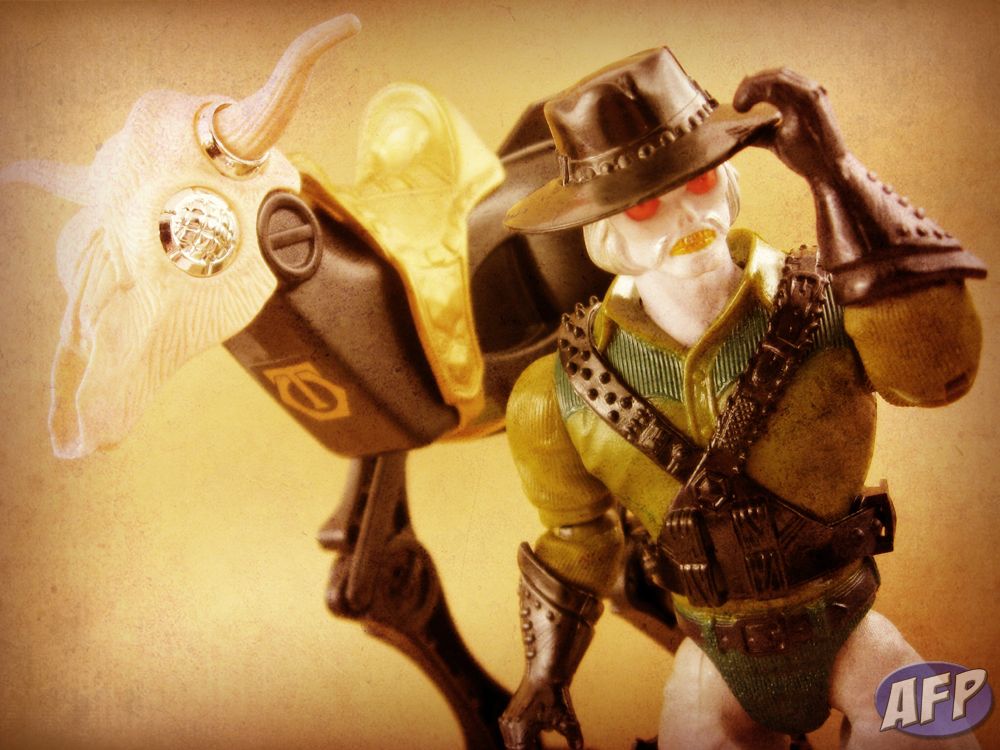 In 1986, a year before the TV series premiered, Mattel released an action figure line based on the Filmation cartoon series.  Each figure had a unique action feature and was packaged with one or more Kerium nuggets. These figures were large for the time at nearly 8″ tall. Aside from being large for the time, these figures were very detailed and had early styled balljoints, something nearly no other toy had at the time.  The basic figures came in a windowed box with artwork similar to that of their Masters of the Universe counterparts. The packaging made in the 80’s really has no competition these days, as some of these are really works of art, with hand painted scenes and battles. 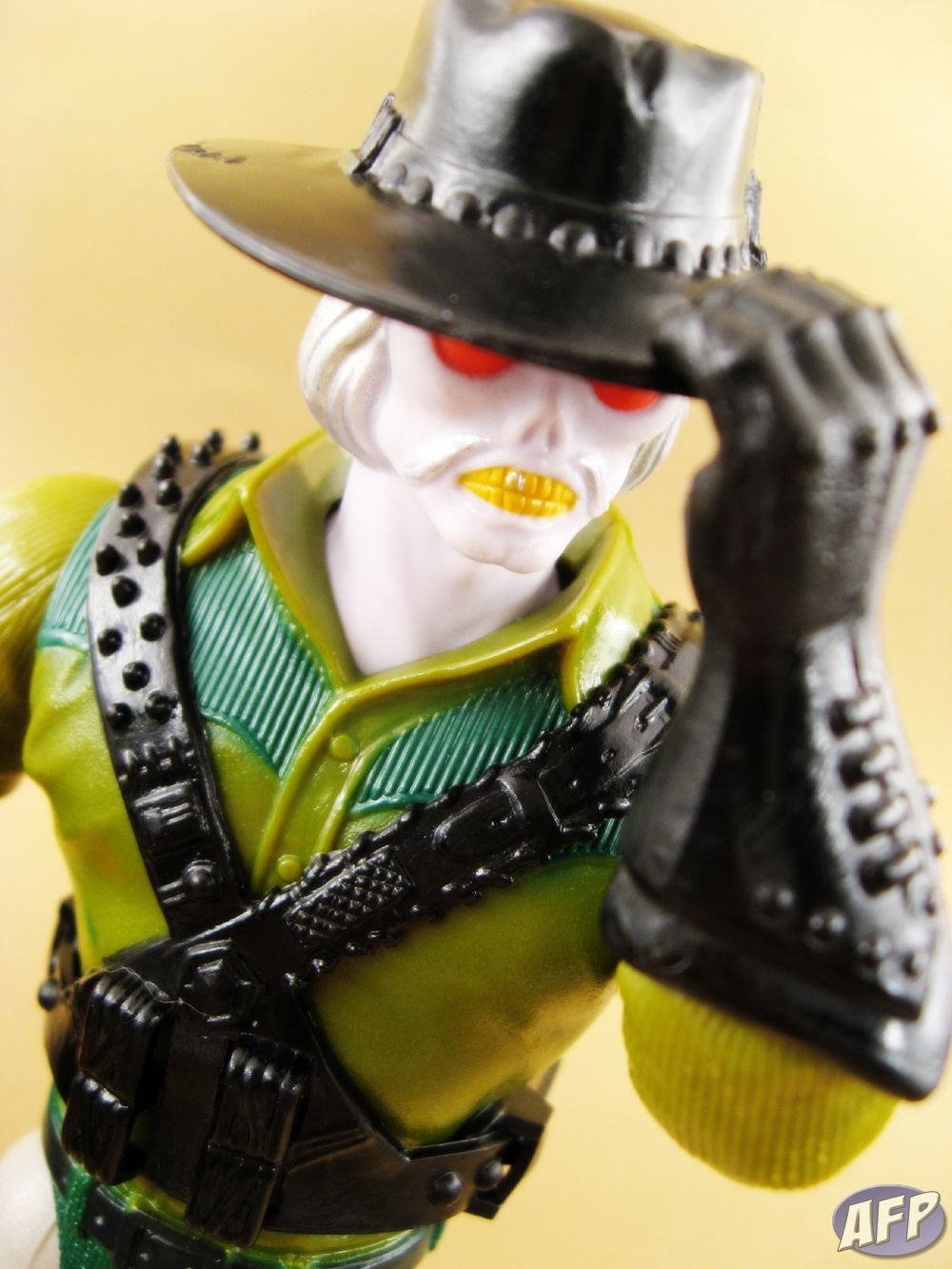 Starting the Tex himself, he actually shares the basic body with the hero, Bravestarr. The new pieces are his head, harness, hat, boots and gloves.  These new parts really make it look like a new figure. Another interesting fact is that this figure looks almost nothing like the character from the tv show, produced later. The face sculpt is very different, with large red eyes, skull teeth and  a skeletal nose. My figure pictured here is missing his accessories, he had 2 gold knives that went into the chest harness, a small hand laser and a larger rifle.

The shoulders have a ball type joint that the arm socket pops into and has a decent range of movement for a figure if the time. The hips also share this ball joint. The head is also on a large ball joint that has good rotation. The wrists are also articulated, which really helps with using the figure on different vehicles. For a figure from 1986, it’s really amazing it has this much articulation and detail, the line was really ahead of it’s time.

Moving onto Tex’s vehicle, the Skull Walker, we have an amazing vehicle with 2 modes I was fortunate enough to find this vehicle brand new and never opened, so I was able to apply the brand new stickers to it and display it here in pristine condition. The first thing you notice about the Skull Walker in person is the size, it’s massive, when you consider the figure is 8 inches itself. The little details on this thing are really impressive as well, from the flat black texture throughout, to the small rivets and vents all around the body.

By pulling out and clicking the legs, the Skull Walker can become basically a speeder bike, which is how it was mostly shown in the cartoon. This mode is really cool looking, very long, and Tex looks great riding it in both modes. He holds into the horns as handlebars very easily, and the gold rubber saddle helps keep him in place as well. Also in both modes, the head can be tilted forward to become a secret chamber for the included Kerium nugget.

Bravestarr toys are generally affordable these days, as long as you don’t mind a few missing accessories, with the guns and hat’s being the hardest to find. Some of the other toys like the larger vehicles or weapons fetch higher prices, but the basic figures are pretty affordable.

Once again, I was fortunate enough to come across another vehicle besides the Skull Walker, so stay tuned next week for Part 2 and the largest vehicle from the line… 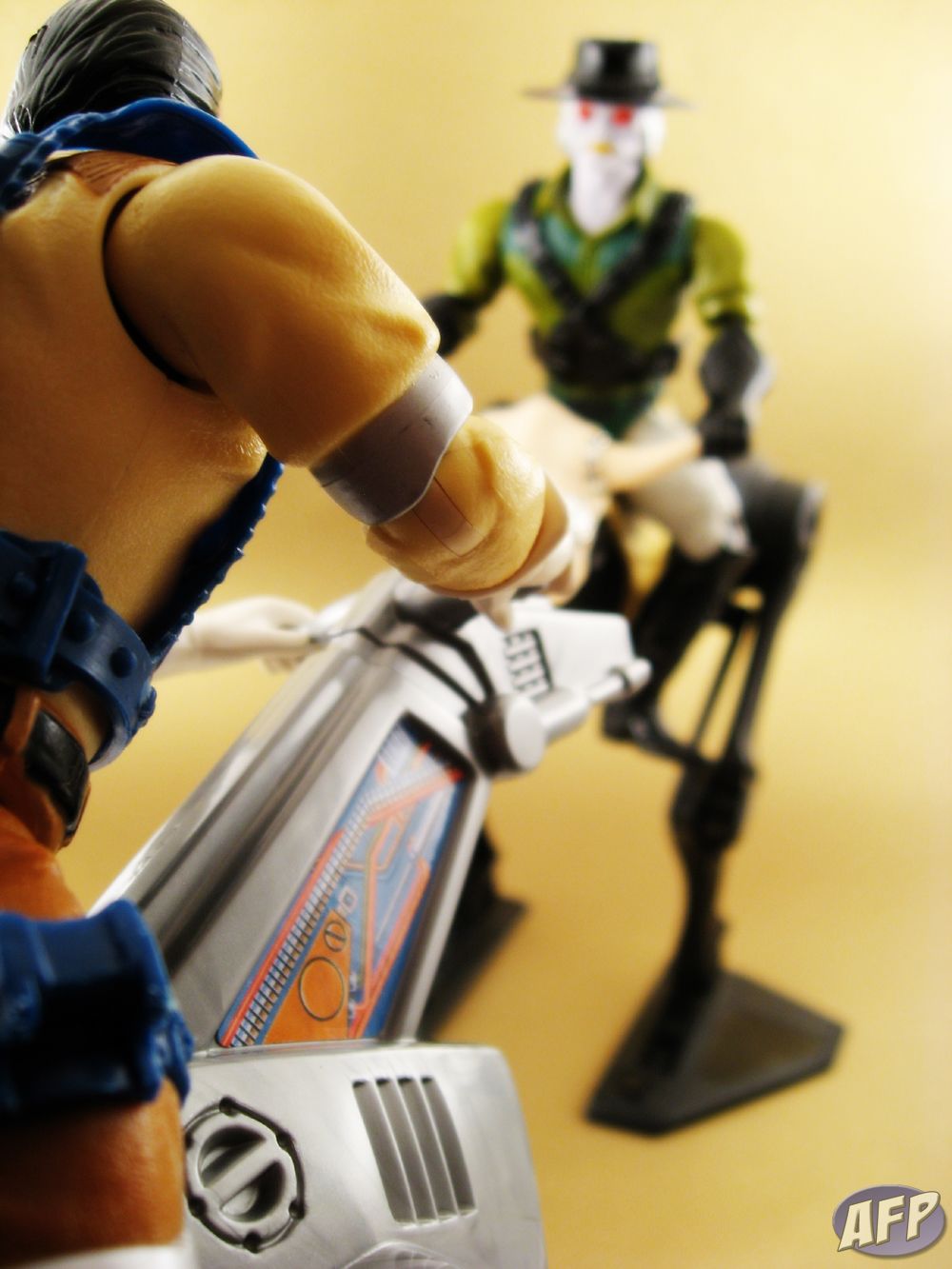