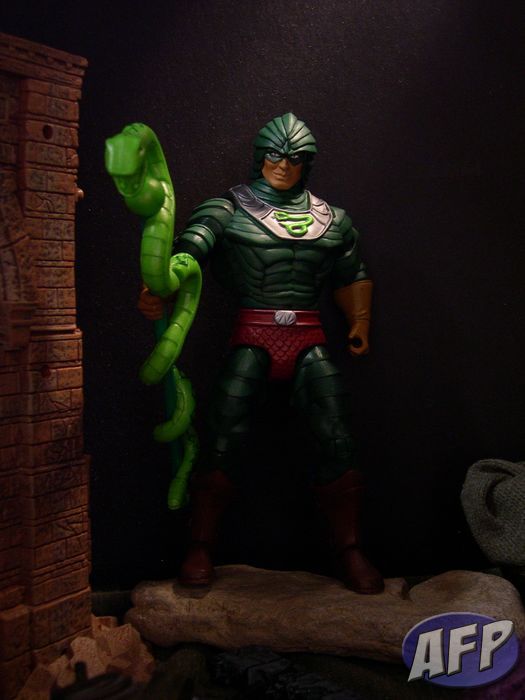 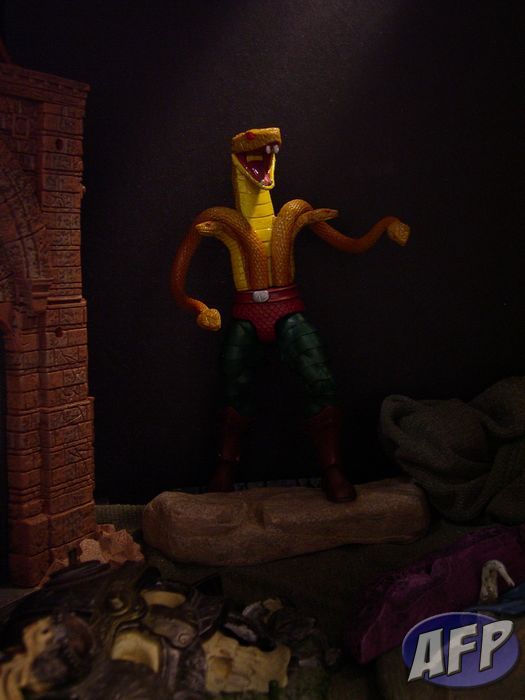 I’m back for a Masters of the Universe Classics Pic Review!! Today we’re taking a look at the Mattycollector March figure of King Hssss! 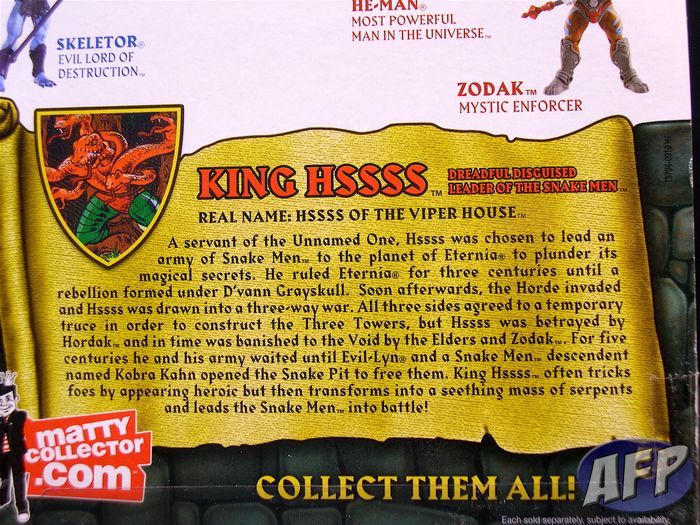 Wow, King Hssss has lived a long time, that’s about 800 years of life in that bio.

Let’s have a look at the ” Dreadful Disguised Leader of the Snake Men ” in his human form. 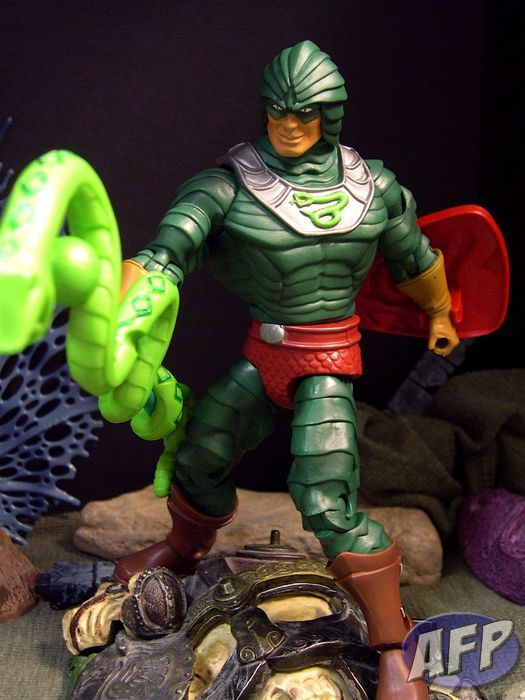 King Hsss sports a lot of new sculpting. There’s the almost heroic headsculpt that’s really well done. He’s also got nicely detailed scaled arms and legs. A separate torso armor piece (which doesn’t come off) has been laid on top of a regular MOTUC torso (probably the “Battle Armor” torso). He’s still got working ab articulation, but due to the front armor, forward movement is a bit restricted. Also due to the thickness of the armor, you can’t pose his arms close to his torso.

There was an issue with switched shoulder parts that Toy Guru from Mattel had addressed at the Mattycollector Forums. Unfortunately the shoulders were reversed and correcting the problem would not be so easily done by Mattel in a possible re-issue. Personally, I didn’t really notice the problem until I read about it, so it’s not such a big deal for me. I can understand though if some people would be upset about quality control issues in such a pricy toy line, especially since it’s happened a couple of times with other figures in the line (He-Man and Roboto).

He sports a different kind of underwear from most MOTUC characters, in place of the traditional loincloth he’s got scaled briefs. Like Aquaman! Due to the sculpt of his thighs and scaled briefs, Hssss has very limited forward leg movement, which keeps him from doing some crouching poses. I’m wondering if a soft plastic, scaled-brief overlay on a regular MOTUC pelvis would have given him better leg range.

Overall he’s got a nice sculpt. It’s always nice to see some different sculpting in this line as there is a fair amount of parts usage. I just wish he had better range in his articulation especially the legs. 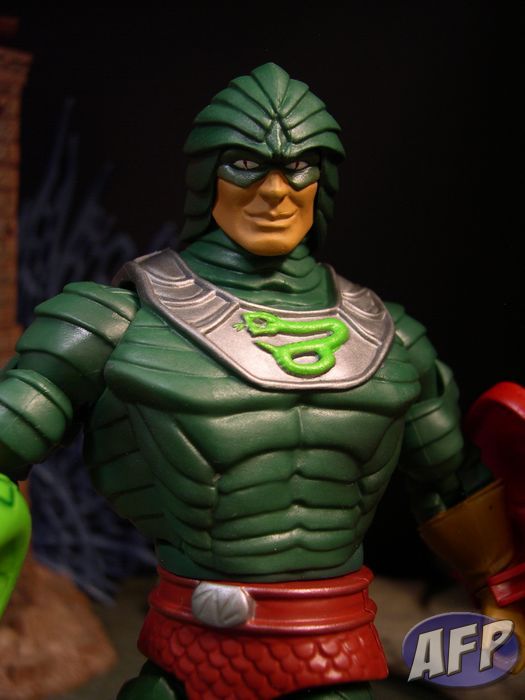 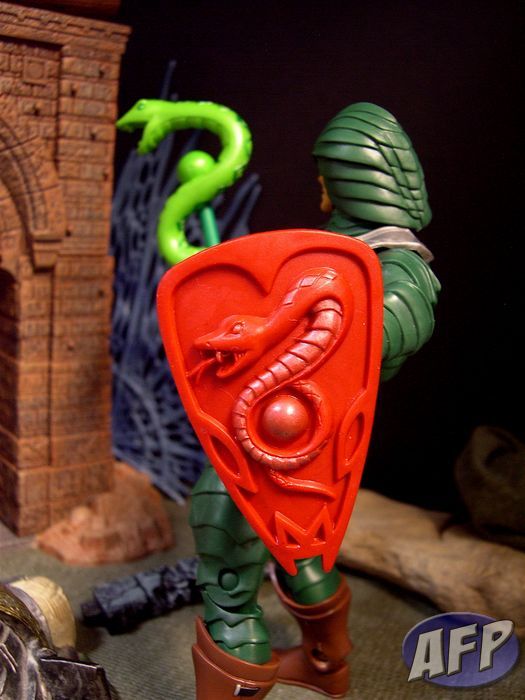 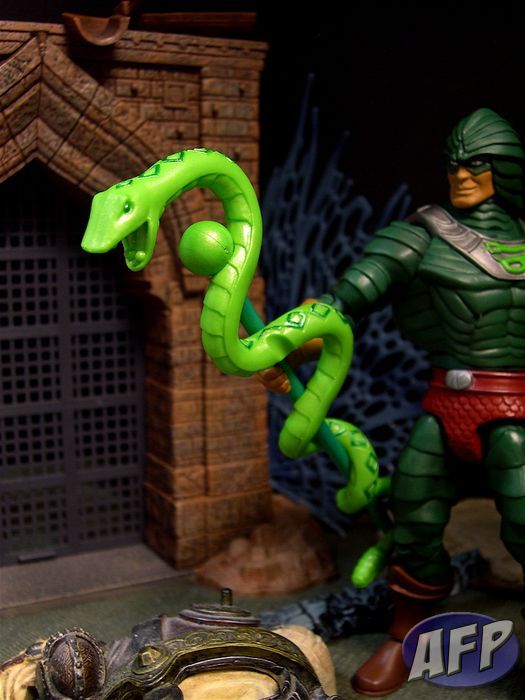 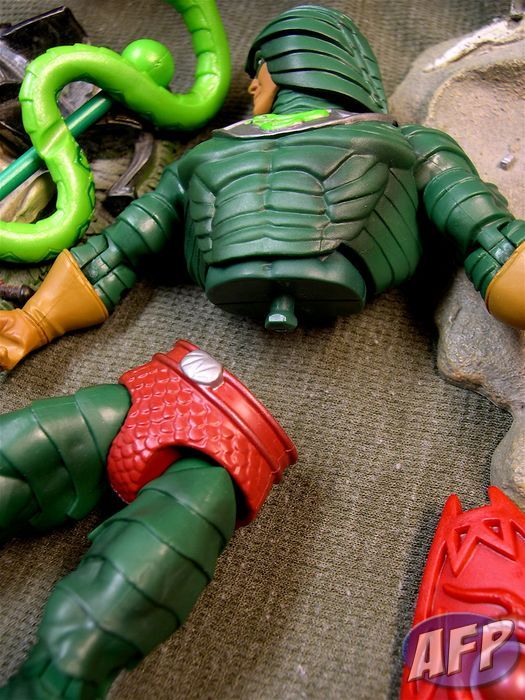 King Hssss comes with a shield and a staff. You can see in the pic above there’s a notch on the staff I got; they forgot to twirl the snake one more time around the staff pole. The snake connects to the staff via pegs, so I just popped off the top part of the snake, twirled it and put it back in. I even ended up taking off the whole just to check out if I can do anything with it. The sculpt of the staff is nice, although I wish the snake had sharper fangs, those nubs just don’t make it as menacing as it should be.

Hssssy comes apart at his waist so you can replace his upper body with his snake form. His upper body comes off easily enough. Almost too easy as it kept coming off every time I try to move his ab articulation.

I also have to mention I love the Snake Men logo sticker on his packaging! 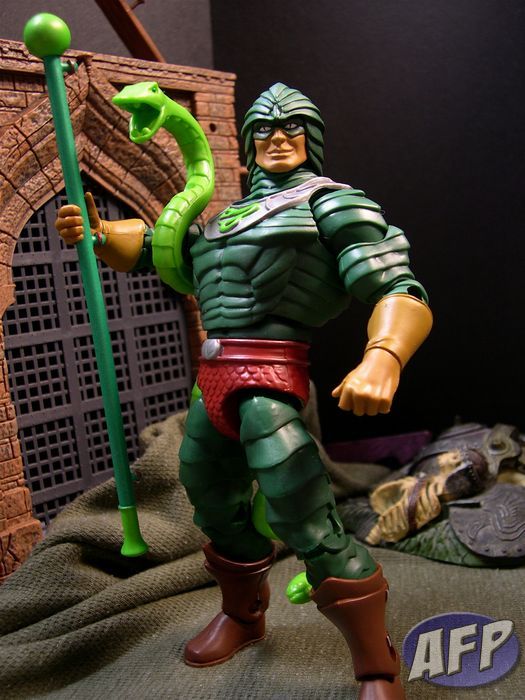 Onto his snake form! 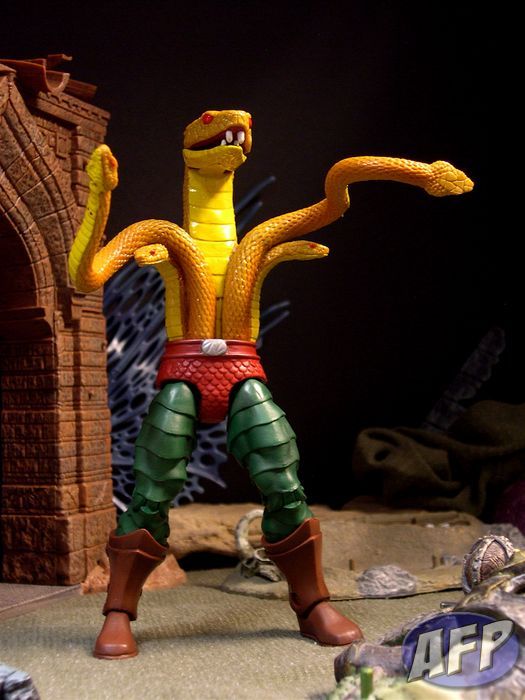 I have to admit, I had more fun with King Hssss’ snake form than his human disguise. I still have a few nitpicks, but I like that it’s something different from the rest of the line. 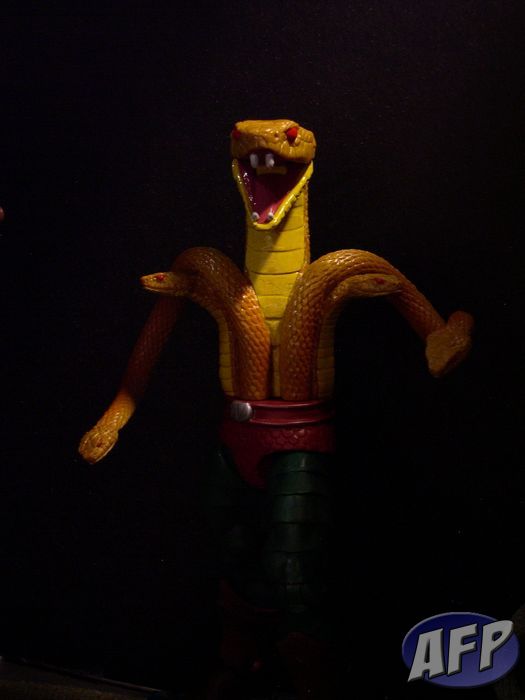 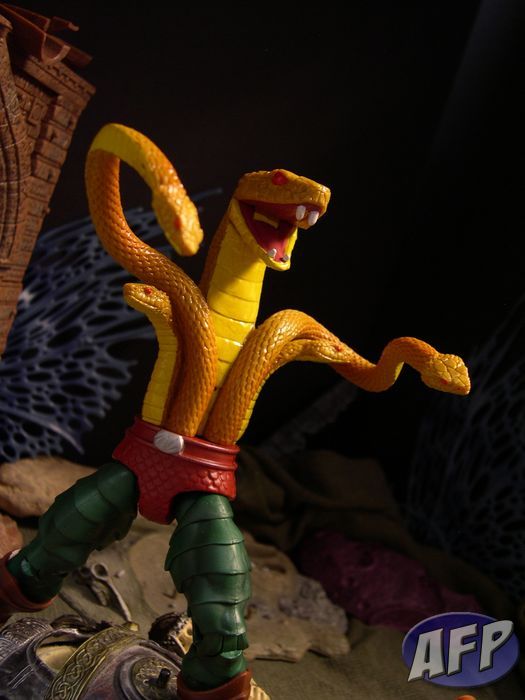 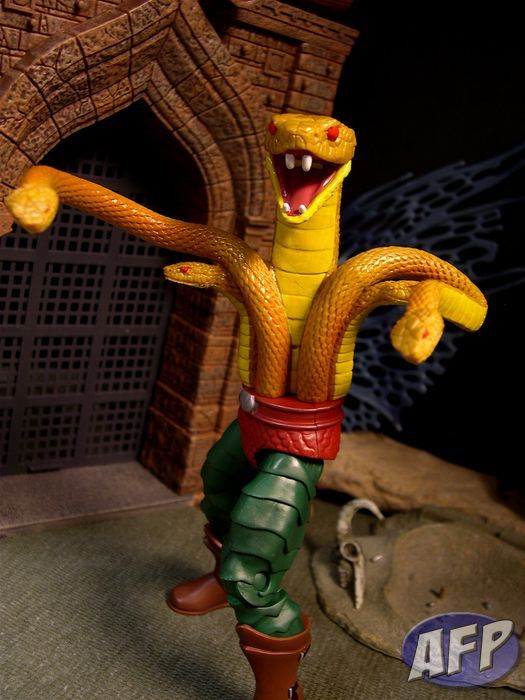 The large main snake head has an articulated jaw, but again I have an issue with the nubby fangs. These toys are “adult collector” oriented so I wish the fangs were a bit more menacing. At first I thought the main snake would also be bendy, but it isn’t. The two longer snakes are bendable and it was kinda fun posing them. I just hope the wires and the rubber hold up well over time. The two lower snakes don’t move at all. With some finagling, you can still get Hssss to hold his staff and shield in his snake form.

A couple more long bendable snakes would have been nice to add to his “dreadfulness”.  The number of snakes doesn’t really match his bio’s description of a “seething mass of snakes”. It just looks too tame, in my opinion.

Nevertheless, I still like the overall sculpt of his snake form. The Horsemen are really good at doing scalework. I thought they did a great job with the DCUC Aquaman, and the same goes with King Hssss’ sculpt. 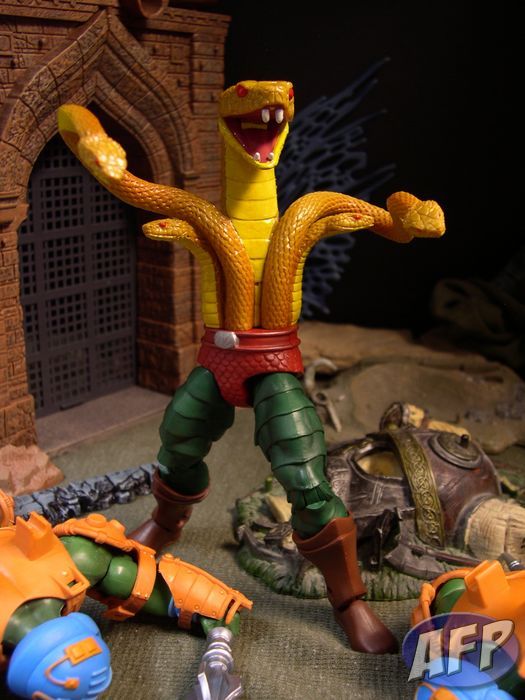 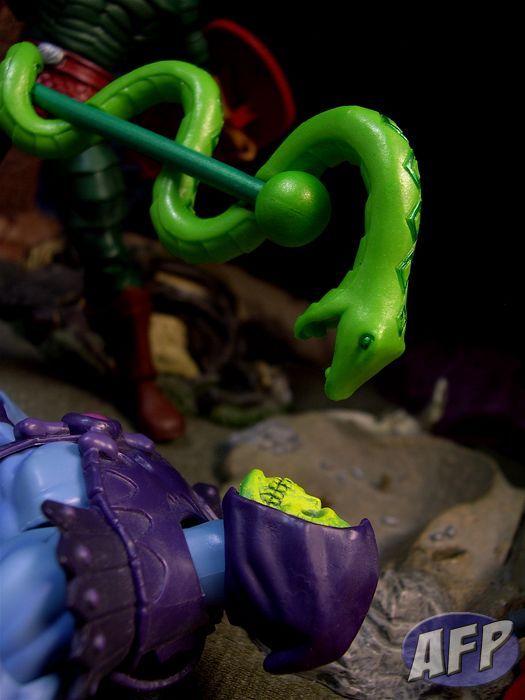 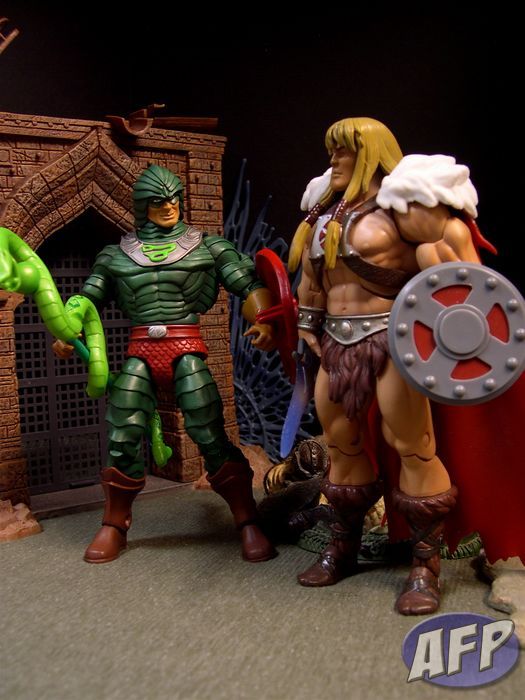 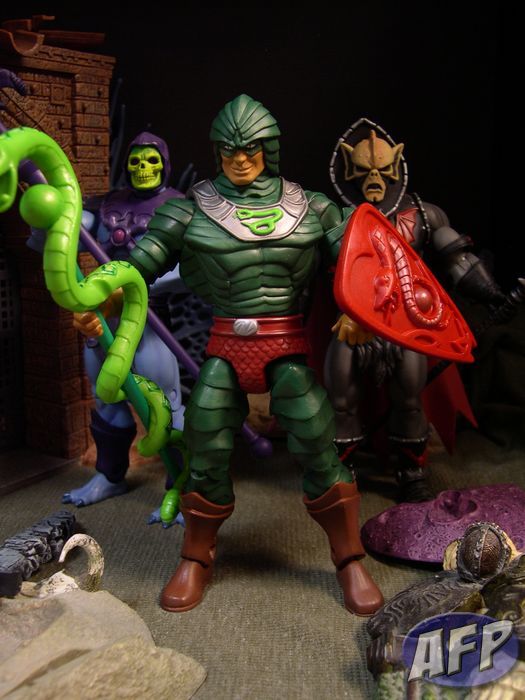 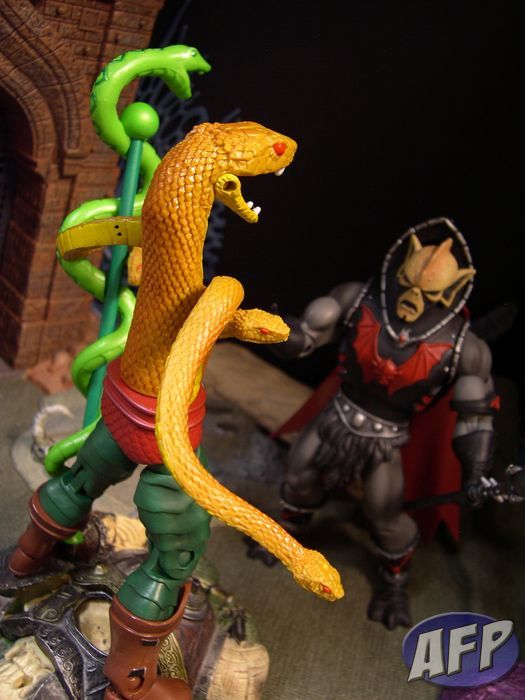 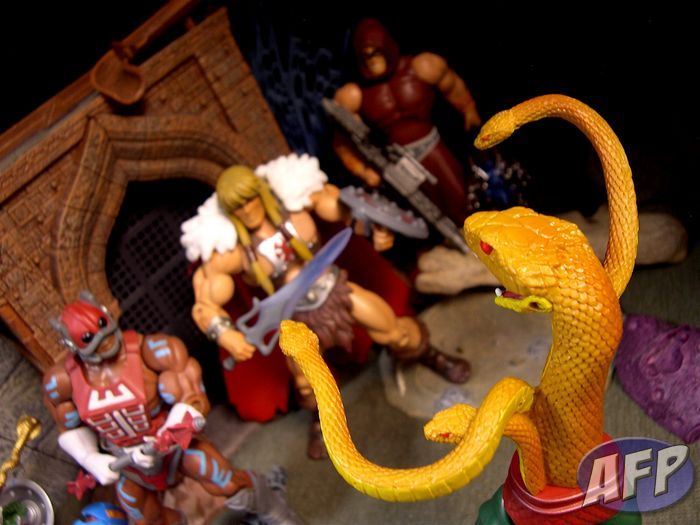 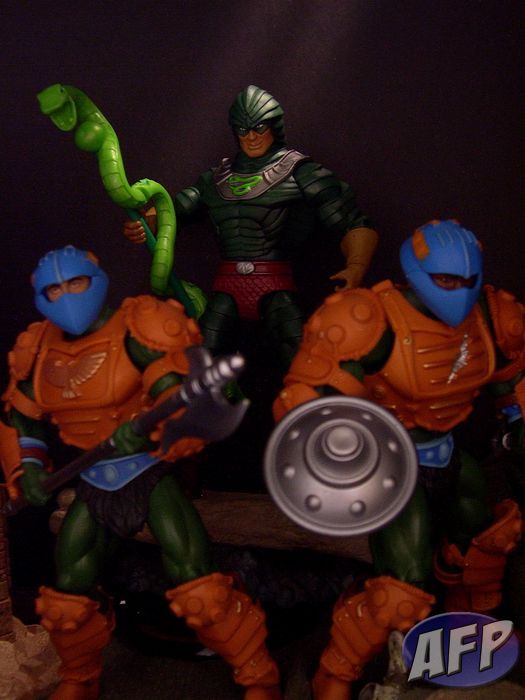 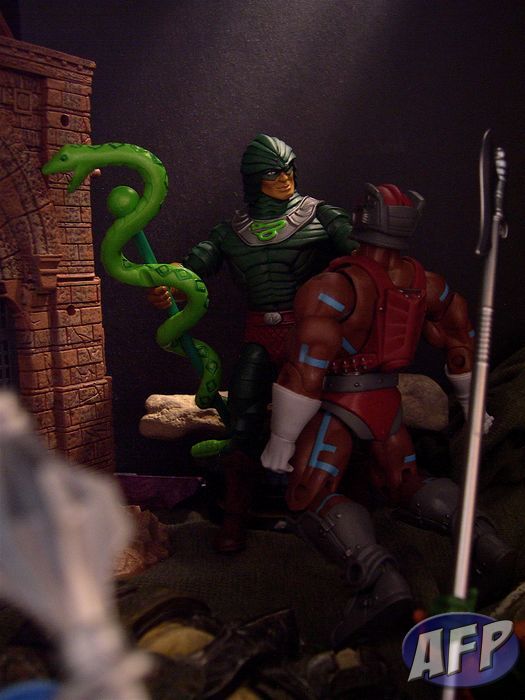 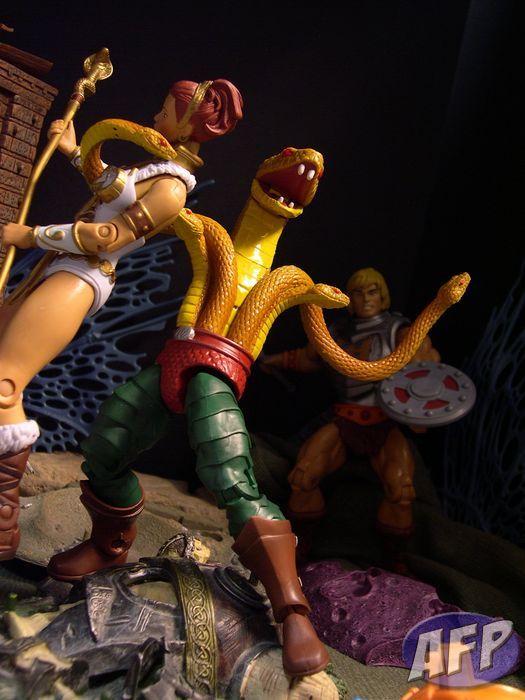 Overall, King Hssss felt like a mediocre MOTUC figure for me. I think he has a great sculpt, and the separate snake form is something different. But being an articulation junkie I just wished I could do more with his disguised form. It was fun messing with the two bendy snakes, but I’ve mentioned that a couple more snakes on his snake form also would have made this a better figure. Also, as much as the switched shoulders don’t bother me, the knowledge that there are still QC issues on an expensive toy line like this, especially one that keeps popping up, is quite annoying. If you’re not a subscriber you can probably choose to wait for one that is fixed, although Toy Guru has stated that there won’t be one coming up soon.

In the grand scheme of things I think it’s great that we’ve started getting some Snake Men, as they are formidable villains in the MOTUC mythos. Plus, the  Snake Men in the vintage line have some odd abilities and  I can’t wait to see how the Horsemen tackle the rest of the gang.

If you haven’t heard yet King Hssss’ inventory was split in two shipments. So he’ll be available again on April 1st at Mattycollector.com.

That’s it for now, thanks for looking and I hope you all enjoyed the pics! 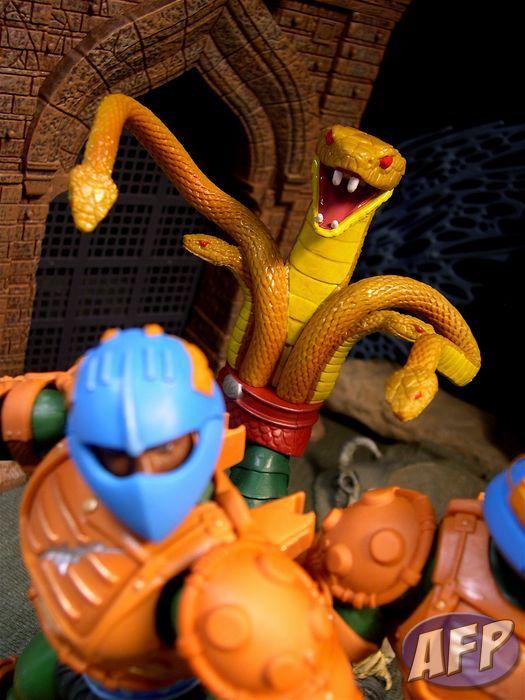 3 thoughts on “Masters of the Universe Classics King Hssss”