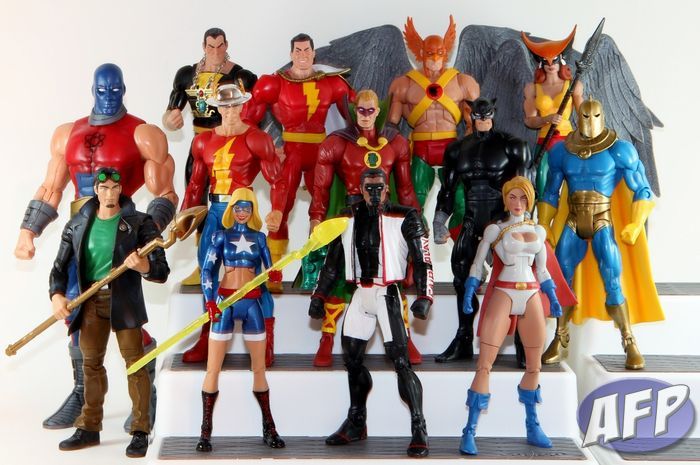 Closing out my group pictures of the Justice Society of America, here’s the modern team, or more accurately, the one from the run of James Robinson, David Goyer, and later Geoff Johns. Although my introduction to the modern team was with Johns’ solo work when DC restarted the series at #1, I found that I preferred reading the back issues from Robinson and Goyer. So, my shelf excludes later additions to the team like Magog or Commander Steel as a Citizen Steel stand-in. And, I’m sure to VeeBee’s disapproval, I don’t feel I’m missing out, not having a Cyclone or (to a lesser extent) Liberty Belle.

But I do have some pretty significant gaps in this line-up – Mattel hasn’t delivered as well as they did on the classic team. While they gave us a modern version of Dr. Fate as a variant to the classic release, we weren’t so lucky with Hourman or Dr. Mid-Nite. Certainly, Mid-Nite would have been about as much work as it was to modernize Dr. Fate, and Hourman would probably have been even easier. When asked about the absence of obvious variants, Mattel has said that these characters could be considered for future release – but with the retail lined being retooled to focus on the big hitters like Batman and Superman, I think these two will be hard pressed to break into the Club Infinite Earths subscription lineup – but I’ll keep my fingers crossed.

When I posted the pics of the classic team, I noted the challenge we’d have getting a Thunderbolt – my dream would be to get all three guys in one package – Johnny Thunder, Jakeem Thunder, and a translucent Thunderbolt. I don’t think the Thunderbolt should have legs, so he should come with a flight stand.

The one guy from this team that I don’t think we’ll ever see is Sand. We got the Wesley Dodds Sandman with the classic team, but I don’t think Mattel would ever consider his successor – just not enough recognition for the character, since I don’t think he has been featured recently.

Flash, GL, and Wildcat will go back on the shelves with my classic team, and Hawkman to the JLA, but the rest of the guys have a date with a Ziploc bag – casualties of limited shelf space. It’s a bummer, because Black Adam has one of my favorite head sculpts in the line. Maybe I’ll find a spot to put together a villains shelf.  If some of the JSA character gaps were filled, I’d think about displaying both teams with the three mainstays bridging the teams, but for now, there’s too many open slots in the modern team for me to take up the extra space. Let’s see what the Club Infinite Earths subscription has to offer my JSA lineup in the future.