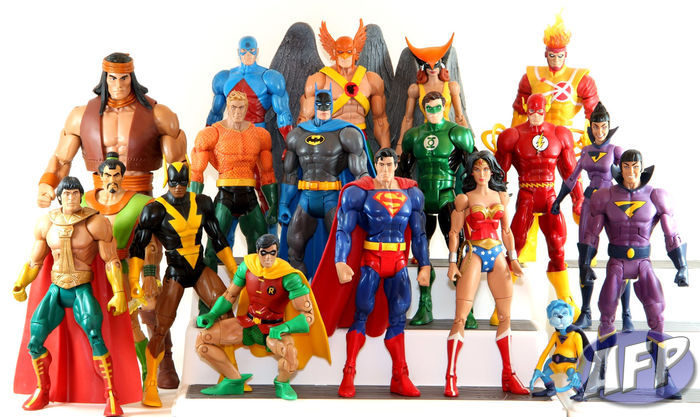 I’ve been taking pictures of some of action figure groups I have on my shelves, but this collection of the heroes that appeared on the Hanna Barbera Super Friends cartoon isn’t one of them. No, it’s not that I have a disdain for the cartoon figures in action figure lines (more on that below) – it’s just that the bulk of the characters are part of a broader Justice League of America display on my shelves. There’s no doubt, however, that the cartoon heavily influenced the character and decos of the figures in DC Universe Classics, so as I prepare for some reorganization on my shelves, I wanted to capture this group. 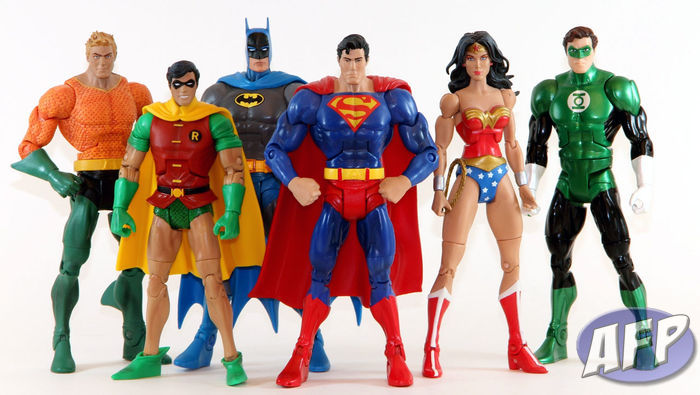 You might debate who were part of the core of the Super Friends. For me, it was Superman, Batman, Robin, Wonder Woman, Green Lantern, and Aquaman. I don’t know if it was the Super Friends cartoon on Saturday mornings or my uncle’s pile of Justice League of America comics that served as my introduction to these characters, but I suppose it really doesn’t matter. They gave me a life-long love of these DC icons. Sure, the show was corny, but this was the era of the Batman live action show with Adam West (who also did some voice work for Super Friends) – and it was great Saturday morning fare for a kid.

Two notes here. First, the Batman head is a scratch sculpt by Ibentmyman-thing. I like it because it cures Bats of the shrimpy head syndrome that most of his Mattel figures have. Second, the Green Lantern figure is from the 2-pack with the taller Sinestro. This version of Hal was appropriate because of the painted eyes – on the cartoon Hal’s pupils were visible. Most of the time in the comics he’s got the eyes whited out. Most of these figures would normally be with my JLA display – yes, including Robin – but I sub in a black and gray Bats cause this one goes with my Cosmic Odyssey group, and I use a normal DCUC 3 Hal with the whited out eyes. 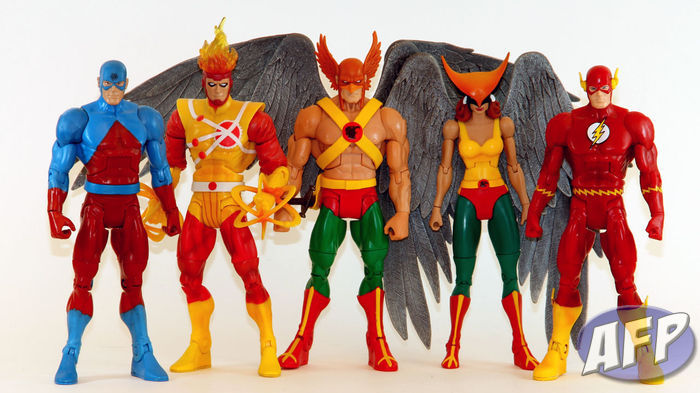 Super Friends featured a lot of the JLA as regular guest stars on the show. The Super Friends entry on Wikipedia lists these guys and Green Lantern, but GL was a regular to me. I don’t actually remember seeing these guys besides Hawkman and Flash in any of the cartoons, but it’s got to be decades since I’ve watched any of them other than short Super Friends mashups on YouTube. With the exception of Hawkgirl, who was part of my modern Justice Society of America display, these guys are part of my JLA shelf, which is mostly based on the Satellite era. I popped the original Flash head back on for this shot – I’ve usually got him with the withered up head from the DC Direct Crisis on Infinite Earths Flash so there’s no mistake that it’s Barry Allen. 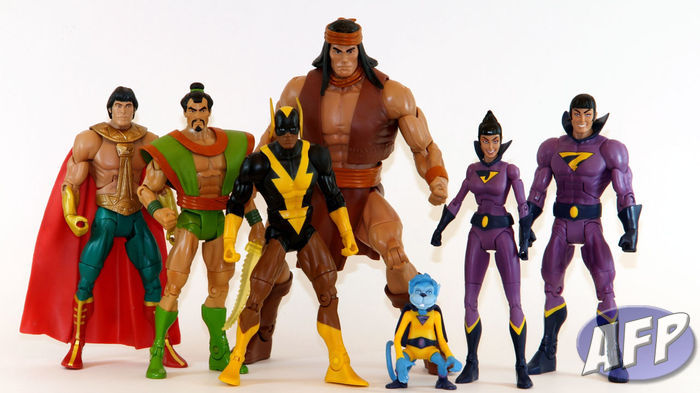 There’s been an incredible amount of internet toy board wrath about the inclusion of El Dorado, Samurai, Black Vulcan, Apache Chief, and the Wonder Twins and Gleek in the DC Universe Classics line. Could I come up with a list of characters I’d have rather had than these guys? Sure – anyone could. We’re all going to have our favorites, but they’ll apply across the line, not just to these guys. For example, I’d rather have a Ra’s al Ghul than an El Dorado, but I’d also want Ra’s over Kamandi or Magog.

Some folks  think that only characters from the comics should be in the Classics line. To me, Super Friends was a huge part of the DC universe to me growing up, so I can live with Mattel going beyond the original source material of the comics for their character choices for the line. Likewise, I get why Super Powers has had such a big influence – because Toy Guru and the Four Horsemen have said that the Super Powers toy line was really the progenitor of Classics – even though I personally haven’t really dug figures like Golden Pharaoh or Cyclotron.

Originally, I wasn’t too keen on the Wonder Twins being a San Diego exclusive, but in hindsight, aside from how they handled Gleek, the choice sure makes a lot more sense than what Mattel has planned for this year’s SDCC exclusives. The nice thing about all these figures is that because the Four Horsemen designed them all, and because the line is based on reuse of standard bucks, if you do choose to display them, they’ll fit right in with every other figure in the line. Admit it – these guys look badass.

Now, if only someone would build me an in-scale Hall of Justice.