Here’s a quick pic review of ThreeA’s Action Portable PITFS (Palm in the Face Sunday) Fighting JC. This guy is the 6-inch version of the original PITFS 12-inch Fighting JC. ThreeA had pre-orders for these figures last year and they started arriving around last month. There’s 5 versions of JC: the original black robe with red detail JC, Mauro which is a grey skinned JC with blond hair and a black robe and pants, Exegesis with blond hair and garbed in white, a track suit JC, and finally the PITFS version which is the one I picked up. Each figure costs $45 (with $15 shipping) and there was a 4-piece set ($180)  which had all JC’s minus the Tracksuit one, which was a surprise drop during the Action Portable Slicers sale.

There’s not a lot of backstory for this guy except he was sent back by the “Big Guy” to kick some butt in a troubled world. He’s a member of the Adventure Kartel team, a group that battles Zomb MD and his undead army. 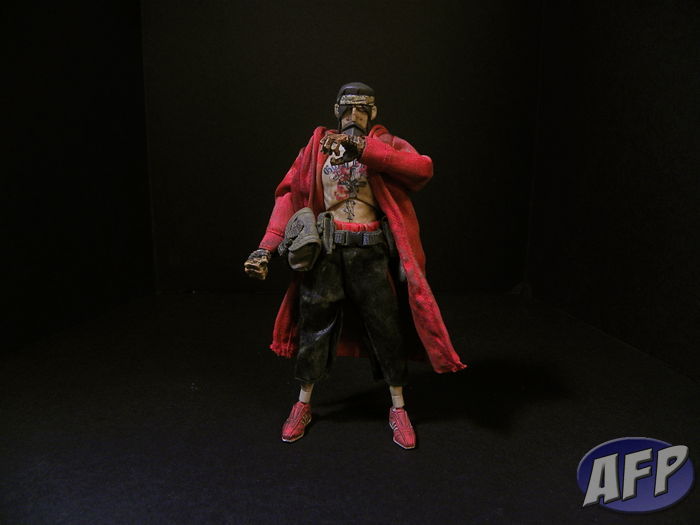 The packaging is great, it’s just a small box that encases the figure with some pictures of JC around the box. 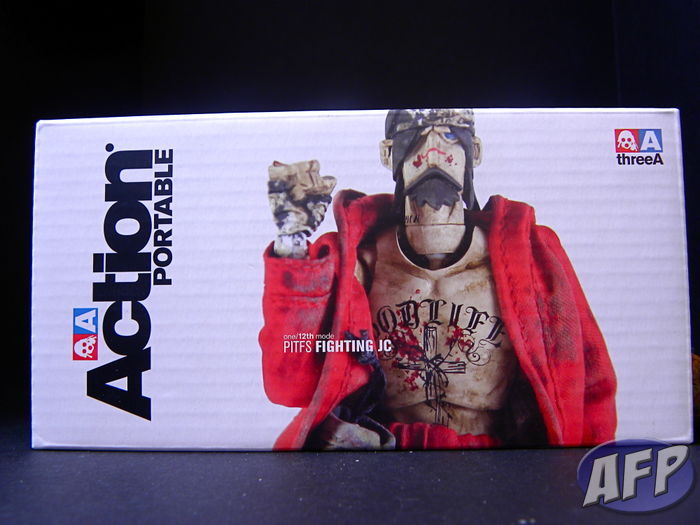 The figure itself is awesome. I don’t own the bigger version, but I’m thoroughly enjoying this portable version. He’s loaded with articulation – think Marvel Legends with a little bit more articulation in the shoulders. You can get him in a lot poses and the joints have great range. 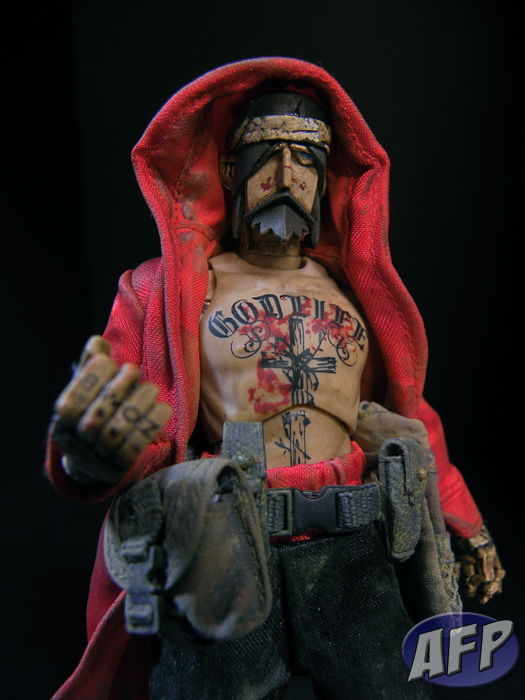 I love his stylized headsculpt – it’s got a lot of attitude. 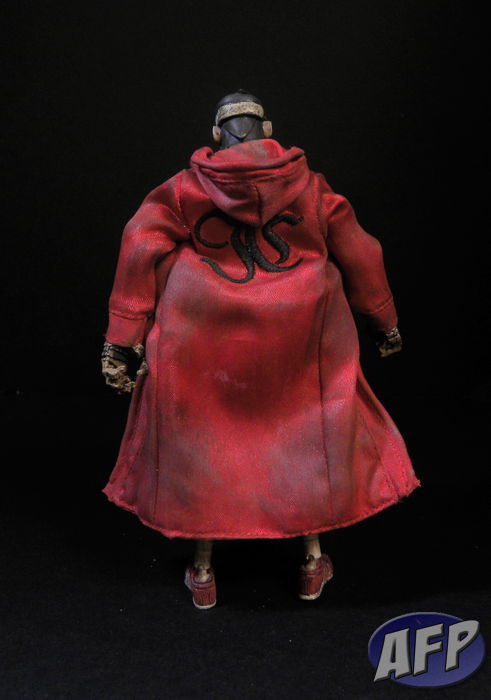 Even at this scale, ThreeA has always been great with creating soft goods. JC’s robe doesn’t restrict his movement, and has some wire running inside front edge of the robe so you can pose it as well. I love that inclusion as you can pose his robe reacting to any action pose.

I’m torn about the pouches. I love pouches on the figure but at the same time they bulge out at the sides and the back of the robe. 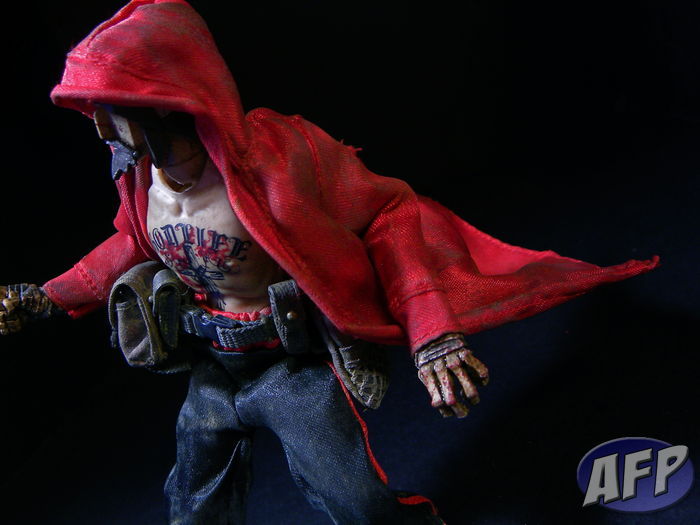 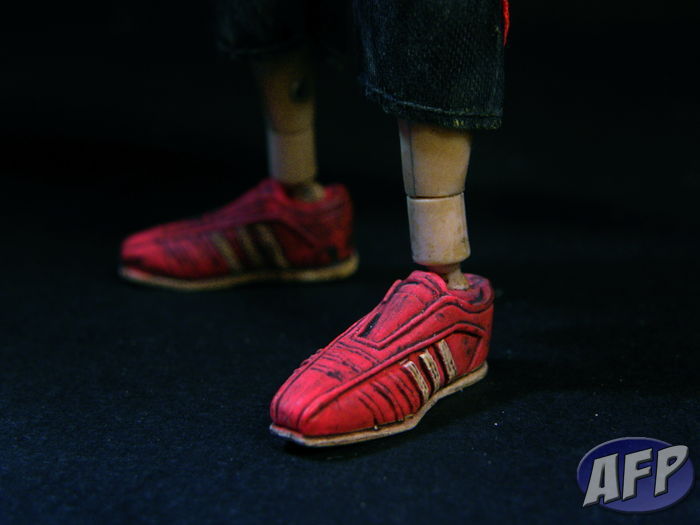 The red sneakers look great – the other versions wear blue. You can see his ankle joint articulation, it’s connected by a double ended ball piece that plugs into sockets, so you get great range of movement. The only problem is they’ll occasionally pop off when you get in an extreme pose, or if you’re unfortunate enough to get a loose joint. 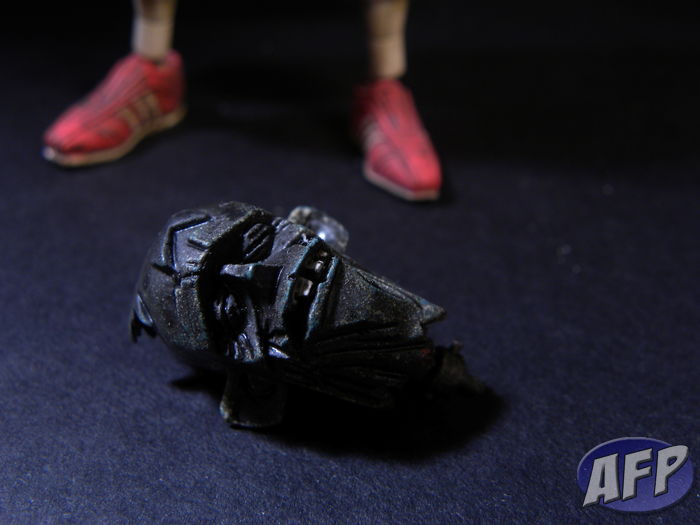 The PITFS version comes with a Zomb head and the Towel of Turin. His belt with pouches also comes off. 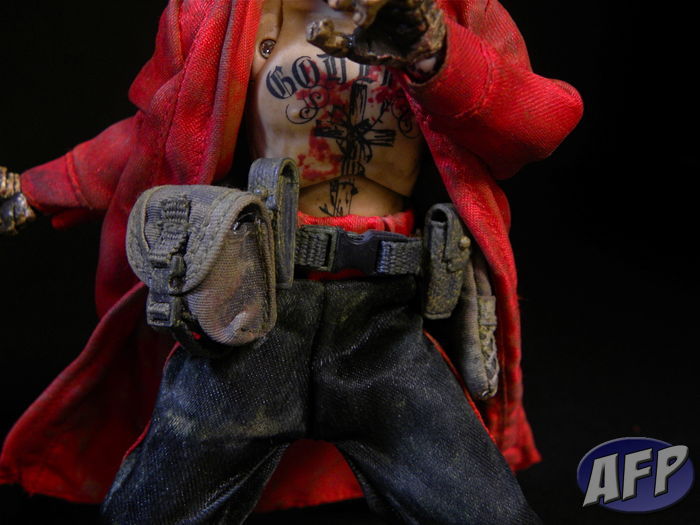 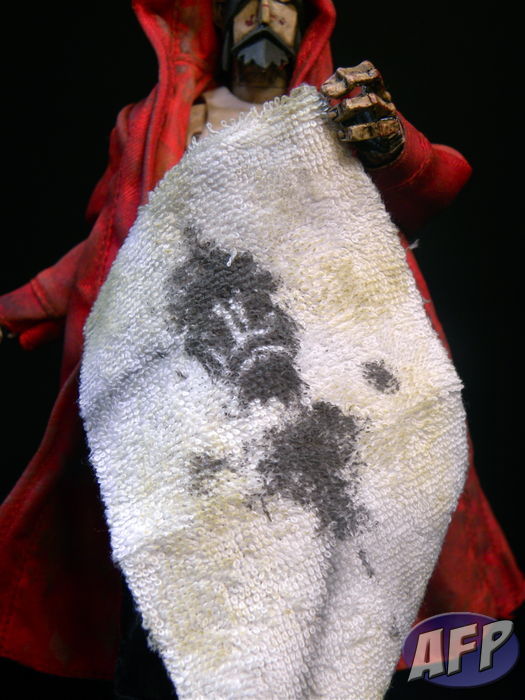 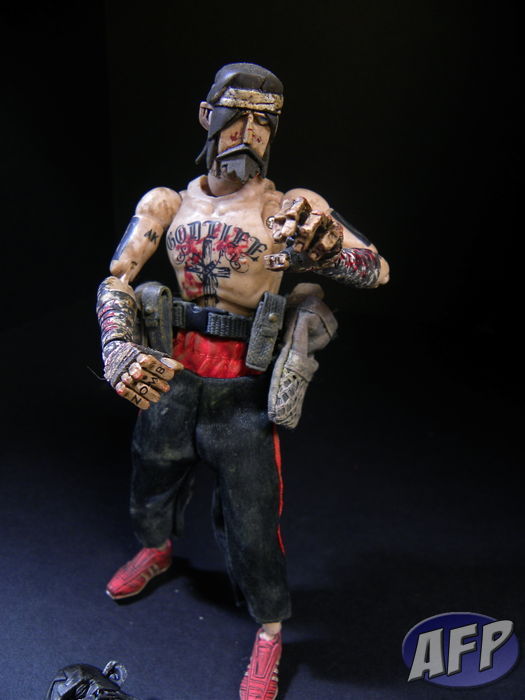 You take off his robe and you can see all his tattoos. There’s a lot to look at and I appreciate that they included all of these details – they just add to his character and story. I do have to say seeing the joints exposed is not so flattering for JC, especially in the shoulder area with all the screws. When his head looks up you see the exposed neck joint as well – also not flattering. Still, this is how he gets all those dynamic poses, so I’m okay with them. I just prefer him wearing his robe. 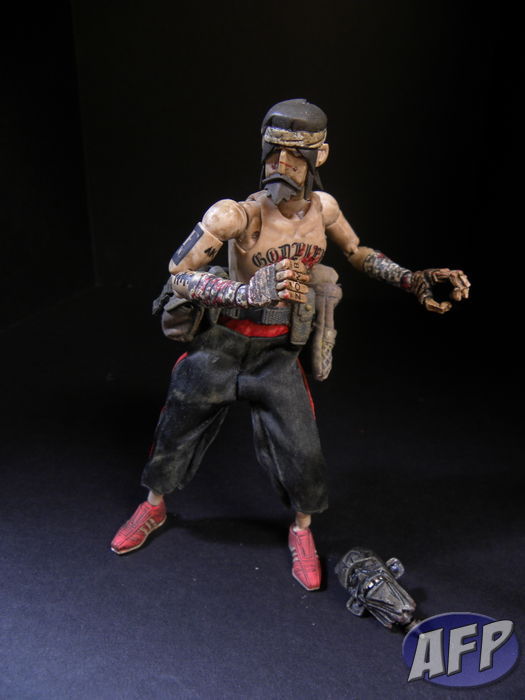 The whole figure is weathered so you get that battle-worn look. 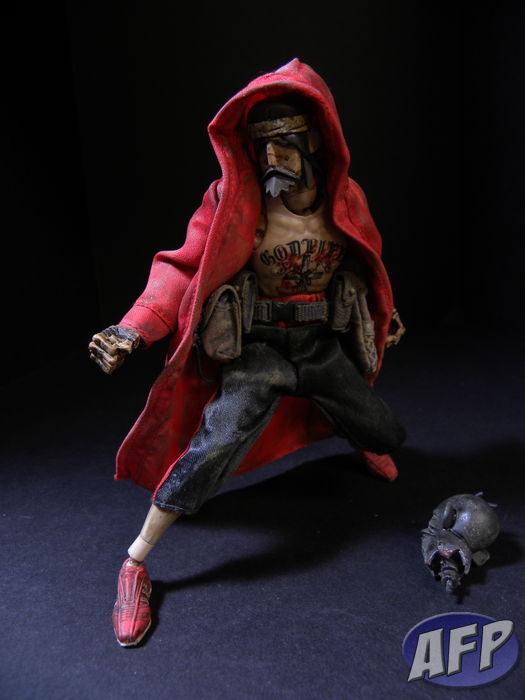 Pose time! I really had a blast posing him! Posing around his robe really adds a dynamic effect! — punching their heads off!! 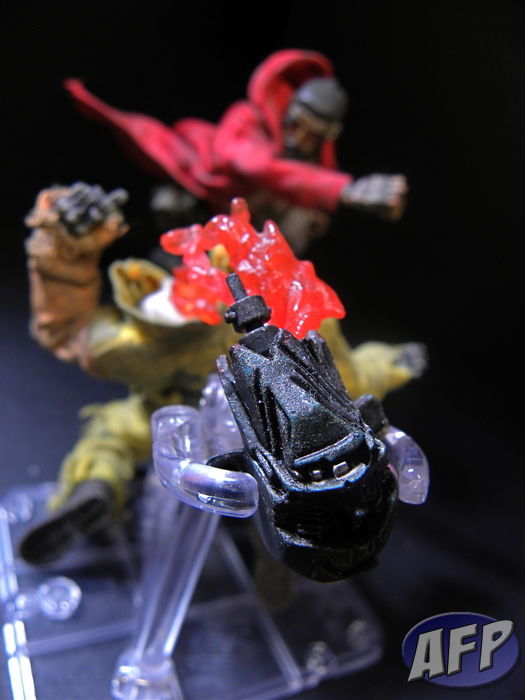 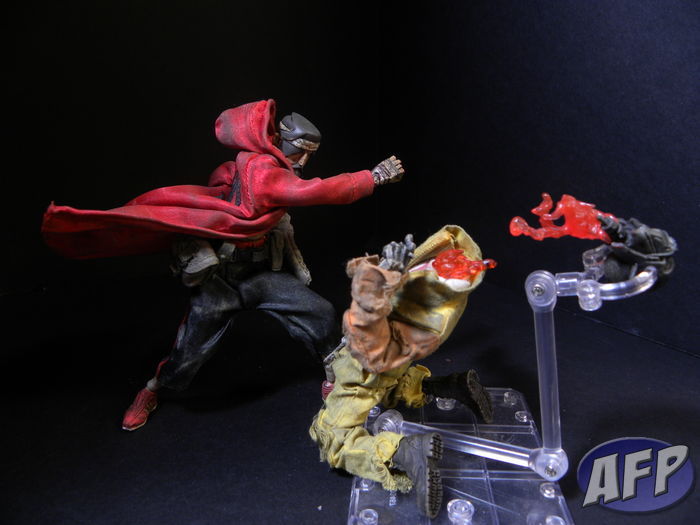 Ok, so I kinda got obsessed with that “punch the Zomb head off” pose but you can see how dynamic he can get. 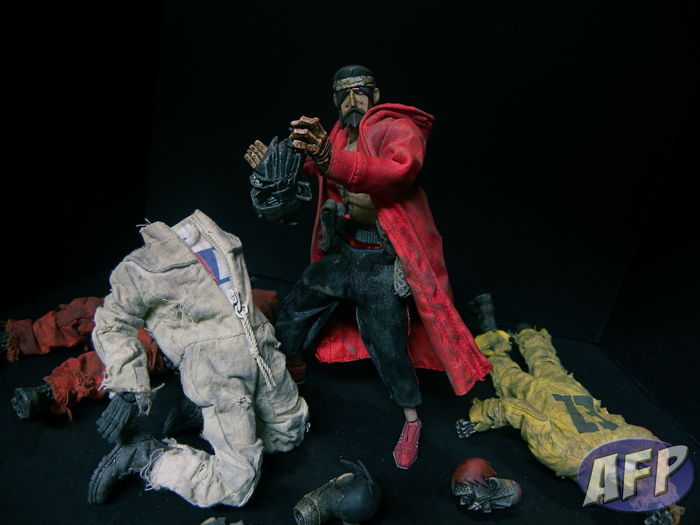 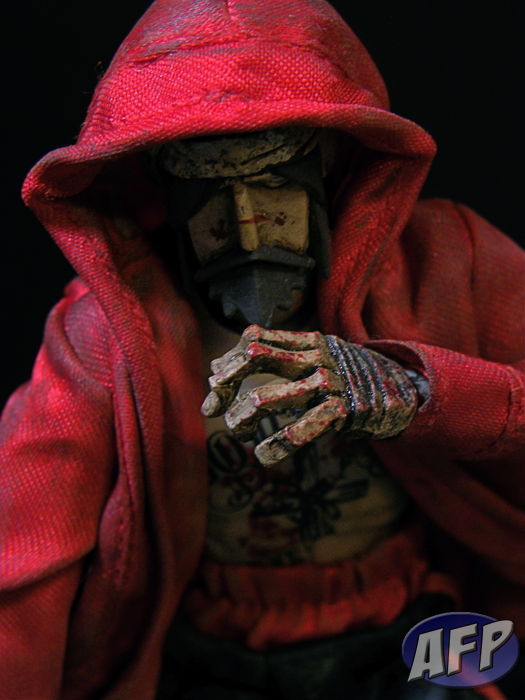 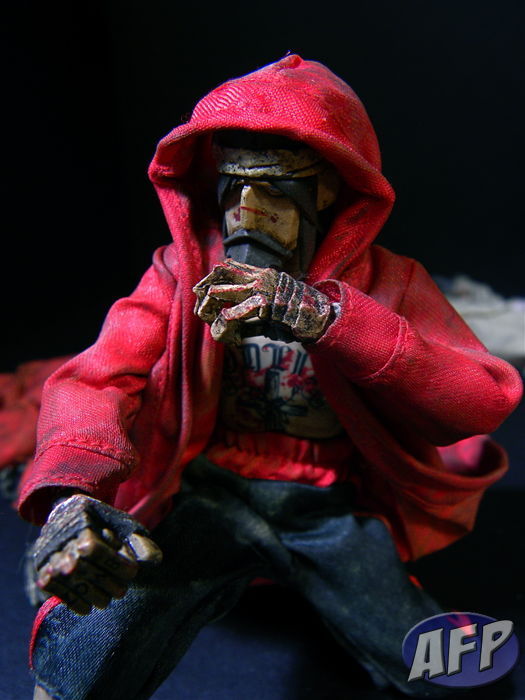 I can’t seem to put down this figure! I play with it almost every day. I love the headsculpt, the soft goods look great, and I love how dynamic his posing can get. Exposed, some of the joints do seem unsightly and the ankle joints pop off occasionally during posing, though not often enough to get me annoyed. Still with these nitpicks I really like this figure. It has attitude and it’s really fun to play with, especially if you have Zombs for him to beat on! I like the figure so much that I plan to track down the other versions in the near future!

Pre-order sales for this figure was ages ago, so your only option would be online resellers or ebay. There are also some ThreeA Buy/Sell/Trade forums you can join in to find some good ThreeA deals.

That’s it for now. Thanks for lookin’!! 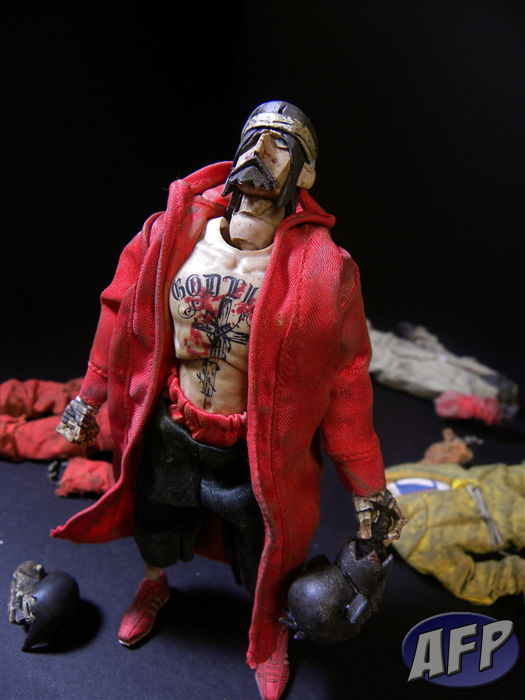