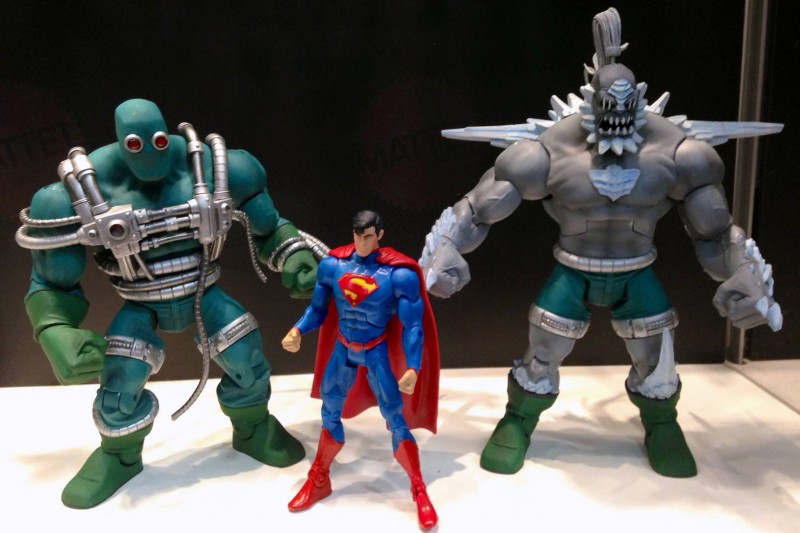 The Club Infinite Earths subscription was declared officially dead last week. So what? – the club exclusive Doomsday, if he had gotten enough subscribers to get him made, was too damn big anyways.

For this edition of Soapbox Sunday, let’s take a look at how Doomsday was portrayed with Superman in the comics that led to their mutual destruction – spoiler! If you’re not convinced that the Doomsday(s) we were shown at San Diego Comic-Con (and subsequently did not support enough to save Club Infinite Earths and get him made) was way too big to be in scale with DC Universe Classics, then you’re probably one of the weak-willed individuals that signed up for Club Infinite Earths, and will never wield a Green Lantern power ring (just like weak-willed me).

Since it was such an epic event for DC Comics, the Death of Superman was spread over five different titles: Superman: Man of Steel, Justice League of America, (plain old) Superman, Adventures of Superman, and Action Comics – each with its own creative team. But we’ll just focus on the guys who were responsible for rendering the characters (and their relative sizes) on paper. There were four pencillers who got the nod. Dan Jurgens pulled double duty (triple, if you count writing too), drawing Superman and Doomsday in both Justice League and the main Superman title. Jon Bogdanove was on Man of Steel. Tom Grummett – Action Comics. Jackson Guice – Adventures. 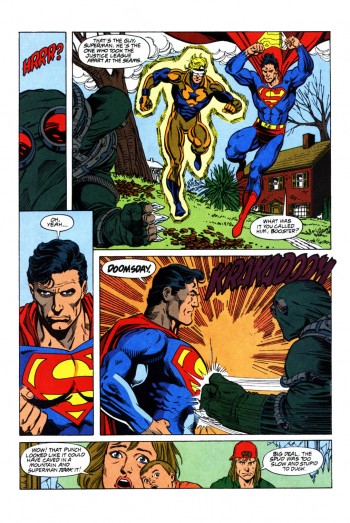 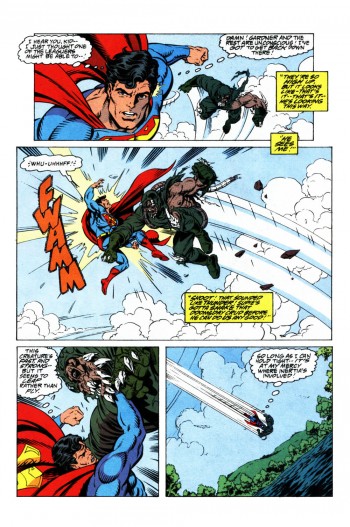 Ever the fan of the slow build-up, DC didn’t have Superman and Doomsday appear on the same panel until the third issue in the story – Superman #74: Countdown to Doomsday! This issue was written and drawn by Dan Jurgens, who had most of the creative duties for the whole story, writing and drawing three out of the seven comics. He’s got the first panel, with Superman taking a punch in the gut from the still mostly jail-suited Doomsday – you know, the blah version that was tier one reward for hitting the subscription minimum but not blowing it out of the water. Why, they look almost the same size there.

In the next issue, Adventures of Superman #497, penciled by Tom Grummett, Doomsday does look a little bigger. You can see this in the last two panels above. Maybe that suit is made out of that Spanx material and keeps him all small. Still, Grummett’s version doesn’t quite match up to the size of either of the tiered Doomsdays from the doomed (see what I did there?) Club Infinite Earths. 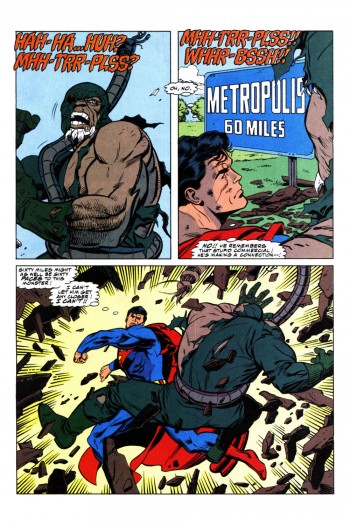 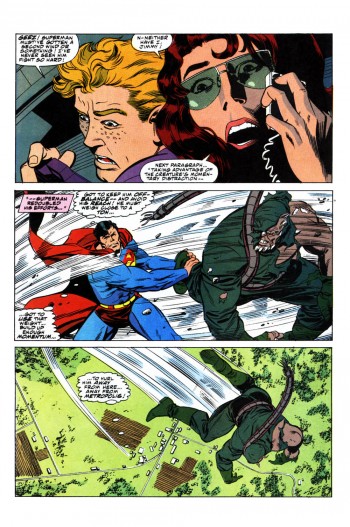 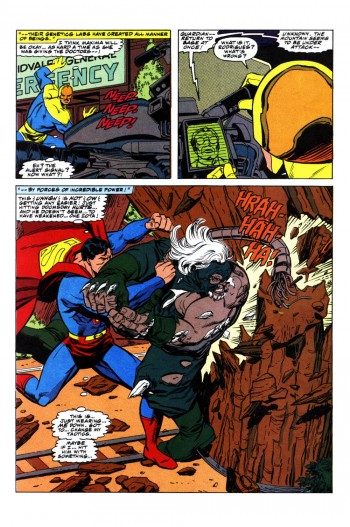 Up next is Jackson Guice, the penciler on Action Comics #684 – Doomsday is Near. That Spanx jail suit is doing its job, because Doomsday still looks not that much bigger than Superman.

Take note also that the inker on this issue is Jon Bogdanove, who also pencils the next issue, Superman: Man of Steel #19 – Doomsday! 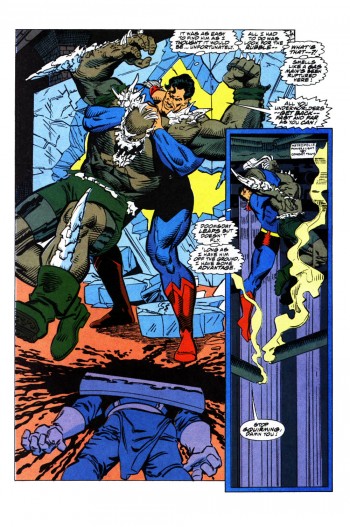 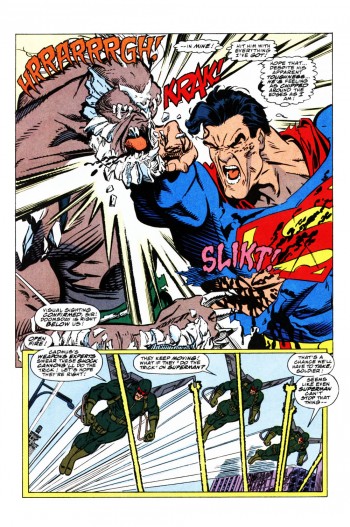 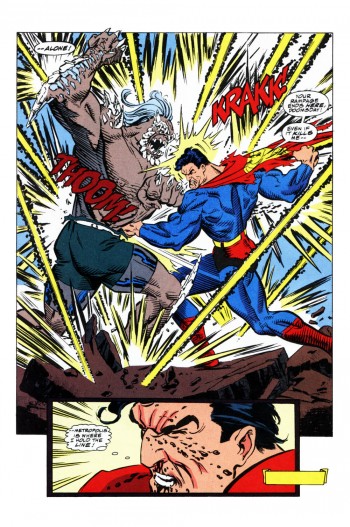 Bogdanove’s Doomsday isn’t that much bigger than Superman either, and by now Supes has managed to remove all of that pesky jail suit so he can get close and personal. I can’t imagine a regular-sized DC Universe Classics Superman putting that huge Kilowog-sized Doomsday in a full nelson.

This brings us back full circle to Dan Jurgens.

Jurgens gets the bulk of the Superman vs Doomsday fight in Superman #75 – the Death of Superman! By now, any effects of the Spanx material has worn off. Doomsday is pretty big in some of these panels, able to grab both of Supes’ feet in one massive, bony hand. Still, is Doomsday really that big? Check out the Jurgens shot where you can see both characters in full, with the Daily Planet in the background. Again, Doomsday is certainly bigger than Supes – just not by that much. 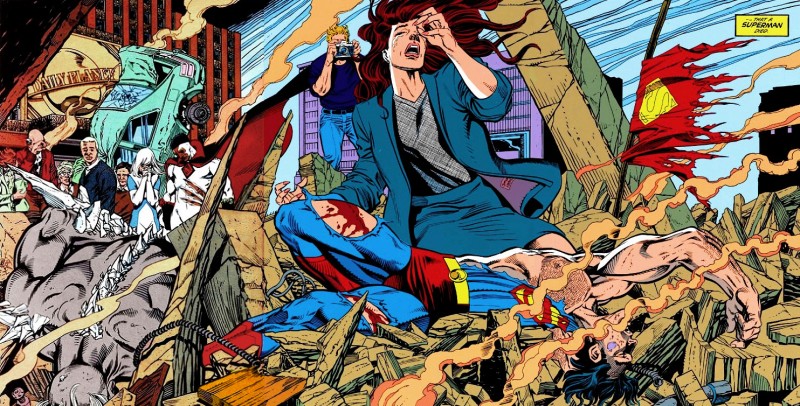 So, what does this all mean to us? I guess not a heck of a lot, with the Club Infinite Earths sub in the toilet. But maybe, just maybe, you’re feeling a little bit better that you’re not getting a ridiculously over-sized Doomsday… in a ridiculous green Spanx jail suit.

But going forward, I think the team at Mattel would be out of their minds if they didn’t make the unleashed Doomsday the San Diego Comic-Con exclusive for 2014, with plenty left over for sale on Mattycollector. I can understand holding him for subscription bait this year, but just compare how much you would have rather had Doomsday than the big-hooded New 52 Captain Marvel that they offered at SDCC this year.

If they made Doomsday for SDCC, even if he was still ridiculously oversized, I’d still buy him. Wouldn’t you too?

And while you answer that, think about this: how awful was it that they invented Doomsday to kill Superman in the first place? Wouldn’t it have been SO MUCH BETTER to let Lex Luthor finally have his day? I mean, how many times are you gonna kill Superman in the comic books?