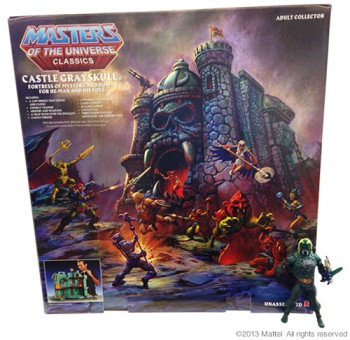 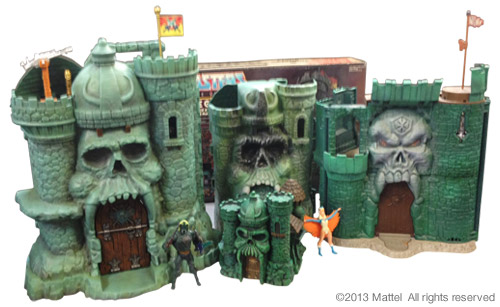 Mattel posted their reveals for Masters of the Universe Classics. One update from our earlier post – while Club Eternia is indeed opening up for more subscribers, it’s only for a few days (not months, as we saw reported elsewhere). Club Eternia will be available again between 9/20 and 9/24.

They provided some nice shots of Castle Grayskull, Blade, Scorpia, and Battle Lion. For the mystery accessory, which we know to be Extendar’s shield, it was the same question mark image that they used for the Unnamed One. More on Extendar will be shared at New York Comic Con in a few weeks.

Blade is the first character from the 1987 film to appear in the Classics line. The figure is inspired by the vintage line and sculpted in Classics style by the Four Horsemen, and will include two swords and a “laser” whip.

One of the most demanded Filmation characters finally makes her debut! Scorpia™ is a POP bad girl who was one of Hordak’s main henchwomen in the classic TV series and appeared in almost every episode. She’ll feature pincers (like Buzz Off®), her deadly scorpion tail, and a Horde crossbow.

As Battle Cat® is to He-Man®, so Battle Lion™ is to King Grayskull™. Based on an appearance in Episode 35 of the 200X series, his armor is removable and will seat either release of King Grayskull® (figure not included).

A mysterious accessory for an upcoming figure was (unofficially) revealed. More details to come at NYCC.

We know we’ve posted lots of photos and videos as production has progressed, but honestly, they just can’t do justice to the real thing – it’s a BEAST! We’re super stoked to see how it’s coming along and can’t wait to ship it to you later this year. For now, have a look at the box art in full color and a closer-to-final castle. This latest model has an elevator with improved functionality, a new paint job, and the chains in the dungeon have been upgraded from plastic to real metal!

Pretty awesome reveals, right? You’re going to want every one of them when they’re released so if you missed your chance to sign up for 2014 Club Eternia®, here’s one more opportunity! We’re re-opening sign-ups from Friday 9/20 9am PT through Tuesday 9/24 11:59pm PT. Want a reminder? Click here to register for email.

Okay, that’s everything from Power-Con. Next up is New York Comic-Con October 10-13 and we’ll have even more reveals so be sure to keep your eye on this spot!