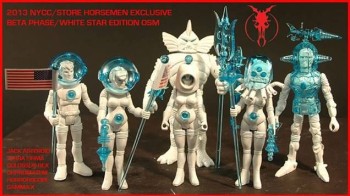 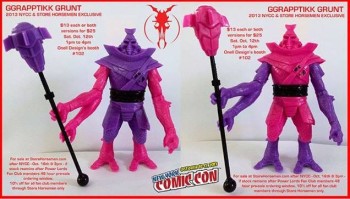 The NYCC exclusives from the Four Horsemen go on sale at StoreHorsemen in a couple of hours this afternoon, starting with the Outer Space Men at 3PM EST. This will be followed by a Fan Club-only 48-hour window for the Power Lords at 3PM EST tomorrow. And if there’s any remaining in stock, the Power Lords sale opens up to everyone at 3PM EST on Saturday.

They’ve made it clear that this time there’ll be no additional inventory made. So when these sell out, they’re gone, and any sales accidentally made over the allotted inventory will be canceled. So bear with the store potentially crapping out on you and get that sale done. And if you’re not a member of the Power Lords Fan Club, maybe now is the time to get signed up. Good luck and happy shopping!

Sales went well at the New York Comic Con this past weekend on both the Beta Phase White Star Outer Space Men figures and the Power Lords: Ggrapptikks Grunts figures, but they didn’t completely sell out so the remaining stock that was originally allotted for sale at the Onell Designs booth this last weekend will now be added to the allotted stock for Store Horsemen giving all of the fans who weren’t able to attend the 2013 New York Comic Con a better chance of getting these hot little figures into their hands! Listed below are the details of the upcoming sales for all of these figures.

With these sales we’re going to experiment with offering a cheaper alternative to shipping on smaller domestic orders. While we normally only offer FedEx Ground as a shipping option within the US, this time we’re also going to give you the option of choosing USPS First Class Mail as a shipping option on smaller orders. The advantage to using USPS First Class Mail is that the cost to you will be tremendously cheaper than with FedEx Ground. The drawback is that there will be no tracking available when you use USPS First Class Mail. We’re also going to try to put a USPS Priority Mail option together for domestic shipping but that probably won’t happen until the next run of figures we do.

The sale will begin at 3pm est this coming Wednesday, October 16th. The supplies of these figures is limited, so once they’re sold out, they’re gone. Any orders accidentally sold over the the initially offered stock will be cancelled.

Below is a list of the characters and prices (listed for sale as groups and individually – prices below do not include shipping & handling charges).

The supplies of these figures is limited, so once they’re sold out, they’re gone – even if you’re already a fan club member. Any orders accidentally sold over the the initially offered stock will be cancelled.

Below is a list of the characters and prices (listed for sale as groups and individually – prices below do not include shipping & handling charges).