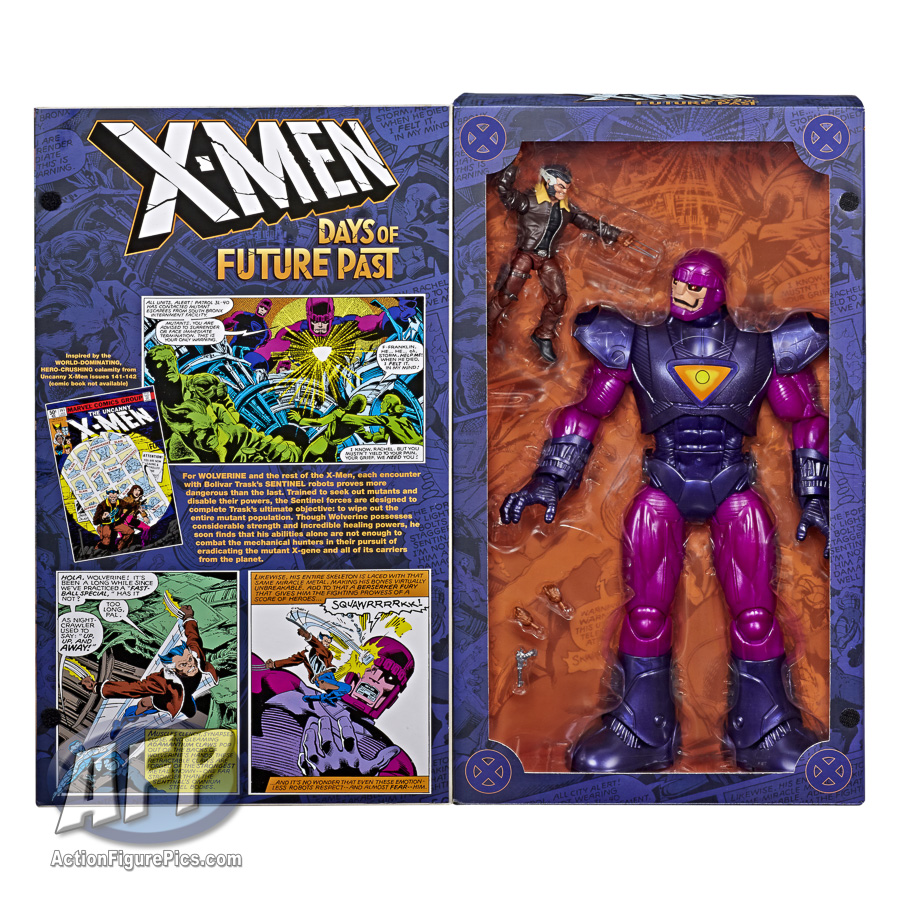 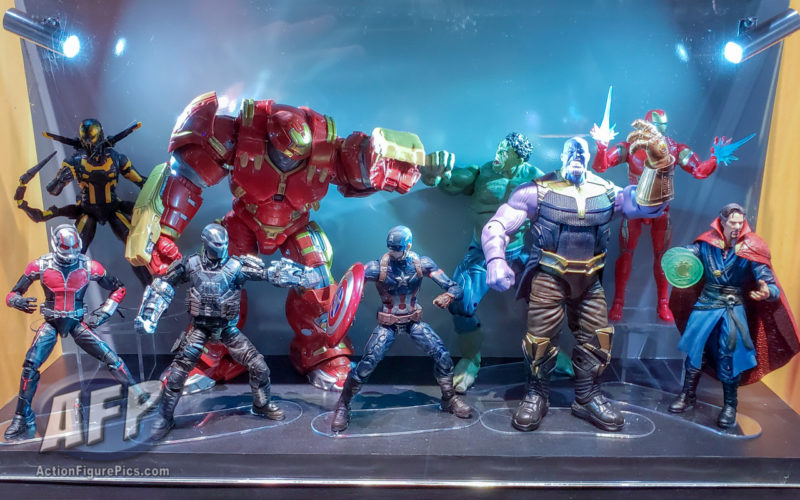 Note: This year I’ll be updating this single post throughout San Diego Comic-Con with pics and video from the show floor, Hasbro’s media brand preview breakfast, interviews, and Hasbro’s Marvel panel. So, bookmark, and check back in again – I’ll have updates at least once a day.

Throughout the Con, Hasbro purposefully included some Easter Eggs in the display. These are not “customs for Con” as long-time reader Zach Woliner dubbed them. The Marvel team have purposefully made lots of things that are still looking for a place in the line, and strongly hinted that they will make it to shelves.

Don’t be surprised if these are hints as to what will show up in the Hasbro Marvel panel on Saturday.

The initial reaction to the official pics of the Netflix set was mixed, despite the first time inclusion of Luke Cage, Danny Rand, and Colleen Wing, as well as the unmasked Matt Murdock head sculpt in the Marvel Legends line. I like them more after seeing them in person, although I am still not enamored with Danny Rand. It doesn’t help that I really didn’t like the Iron Fist series.

For those that have already picked up the Man-Thing / Netflix wave, this set has:

We have seen that Luke Cage (in his more iconic gold shirt) is coming in a retailer exclusive 2-pack with Claire Temple, and the Hasbro team definitely wants to do more figures based on the current and upcoming Netflix series. I’m hoping to have a better Iron Fist (both figure and show), as well as other supporting characters like Misty Knight and Bushmaster.

When Hasbro unveiled the MCU10 sub-brand at Toy Fair, I initially saw it as a cash grab using repackaged figures. While there is some repurposing going on, I’m starting to appreciate this line of ten (eleven when you include the Red Skull SDCC exclusive) packages that comprise this line a lot more than I did at first.

For casual or new collectors, there’s certainly value in picking these up. But even for long-time movie Legends fans, the MCU10 line has plenty to enhance existing collections. Some fan favorite characters are introduced to Legends for the first time, like Guardians of the Galaxy’s Ronan the Accuser, Thor’s Sif, and Ant-Man’s Yellowjacket. And some figures that were teased a long time ago are finally finding spots in the line, like Pepper Potts and the Mandarin / Trevor Slattery from Iron Man 3.

What has really impressed me about the line is Hasbro’s commitment to improving the actors’ likenesses. The face printing technology has certainly helped with that, but they’ve also done a lot to improve the sculpts as well. In some cases, when a character is rendered in 3D for digitally-assisted action sequences, Hasbro will get digital assets to work from. But for many, it’s the traditional approach – gathering as much reference photos as possible before sculpting and refining.

I think Hasbro has yet to nail a Robert Downey Jr. head sculpt – the MCU 10 figure reuses an existing sculpt. But the newer heads, like the Chris Evans one from the Cap 2-pack with Crossbones, are outstanding. 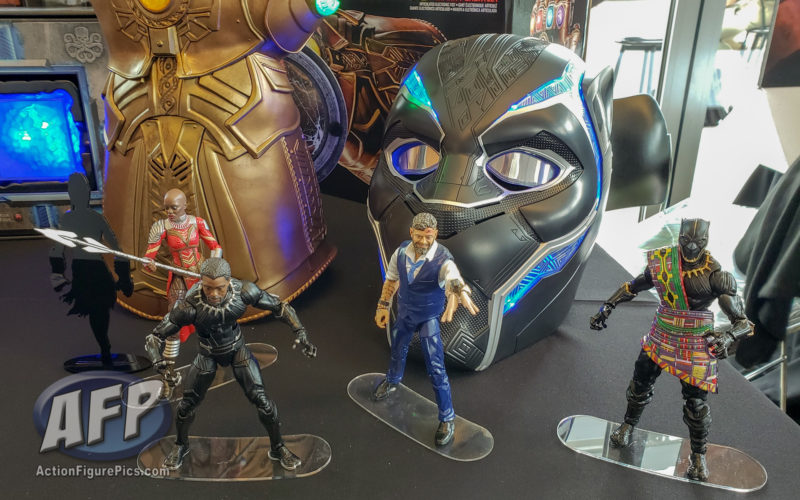 They also displayed a silhouette of Shuri, who is a prominent omission from the current line-up. Unfortunately, the Marvel team dashed my hopes that her presence meant she was part of the wave – she isn’t. But they promise that they’ve got a way to get her made.

The quality of head sculpts prompted a deeper discussion with Dwight Stall, the Hasbro designer for Marvel Legends. Of the many challenges in capturing an actor’s likeness, one of the biggest is the timing and availability of reference material. Work often begins with pictures from the start of a movie’s production, before the character’s look is cemented. For later waves, like this one, Hasbro will have a lot more reference (sometimes including the finished movie). And if a character is involved in a digital-created or enhanced sequence, they might even have digital models to work from.

But what I found even more remarkable is that some of these sculpts, like Ayo’s, are still done the traditional way – with loads of reference shots provided to a sculptor.

After the preview breakfast, Hasbro revealed the remainder of the wave. M’Baku turns out to be the Build-a-Figure, and the remaining two figures in the wave are Killmonger in tribal mask / tactical gear and a powered-up Black Panther. In addition, Ayo turns out to be a troop-builder, with 2 additional Dora Milaje heads included. Fierce!

This wave is due to hit shelves by the end of the year.

My only gripe with this wave is this: wouldn’t we be better served if Shuri were in this wave instead of the unmasked Black Panther, but included his alternate head as a pack in?

We’ve been waiting a long time to complete the Fantastic Four, and I think it’s been worth it. The Thing and Silver Surfer have turned out great.

Hasbro’s final reveal was the Amazon-exclusive Days of Future Past Sentinel and Wolverine 2-pack, which they had on display in their booth for a short time after the panel. The Sentinel was originally part of the 3.75-inch Marvel Universe line, as both an SDCC exclusive (with this deco) and a Masterworks figure bundled with an MU tiger stripe Wolvie. With this set, you’ll get the gray-haired, brown-jacketed Wolverine from the comic.

And, just for completeness, Hasbro previously announced a Gamerverse Spider-Man exclusive to Gamestop, with the costume from the upcoming Spider-Man video game.

Fans of the vintage line will be glad to see it continuing. Hasbro revealed Ant-Man and the Wasp for the line at the Brand Preview Breakfast. Each will include a miniaturized version of their counterpart. On Friday, Hasbro revealed Scarlet Spider (with blonde Ben Reilly alternate head) and Black Panther for the line.

During their SDCC panel, Hasbro revealed classic versions of the Vision and Hawkeye. Hasbro figured out a way to get Vision’s cape to work, and they’re packing in a comic book Ultron head for him to gaze into longingly. Hawkeye has one notable difference from his previous release – he has two bare arms instead of having one protected.

With Spider-Man: Far From Home hitting theaters next year, we expected some Spidey Legends waves. At their panel, Hasbro revealed a sneak peak at a Spidey wave due early in 2019:

Hasbro clearly intended to capitalize on Sony’s Silver and Black movie, featuring Silver Sable and Black Cat. We’ll see if the timing aligns, because the movie seems to be going through some development hell, and may not begin filming until next year.

Kingpin is the Build-A-Figure for the wave. He looks massive and beautifully rendered. Kingpin comes with his cane, pinky ring, and three heads – “angry, grumpy, and very very very angry.” Hopefully we’ll get a look at him in person in the booth on Sunday.

With three Sony X-Men movies (last time I checked) still on the calendar for 2019, fans have been expecting a mutant-heavy year. And Hasbro is eager to please. At their panel, they announced:

The Legends plus vehicle line which launched with Ghost Rider and Black Widow, and continued with Wolverine / Logan, will live on with Deadpool, Dogpool, and Squirrelpool. Deadpool continues the 2-wheeled vehicle trend, with a Deadpool scooter. Fans of the Gail Simone Deadpool run may balk at the not-a-Vespa scooter or bemoan the lack of Akira-inspired stickers, but the realist in me knows licensing is a pain in the butt.

Those of you who watched our “deskside chat” with the brand team at NYCC last year may recall us pressing them hard for a Professor Xavier in his hover chair for this line. After they revealed Prof X during their panel, I asked if they already had him in the works back then. Although the answer was “probably,” I’m absolutely positive that we made it happen. 😉

With Captain Marvel and the follow-up to Avengers: Infinity War due to hit theaters next year, we knew Hasbro would be making figures for them. And although we haven’t seen much yet, they did give us a sneak peak at two of them:

I caught up with Ryan Ting, Global Brand Manager, and Dwight Stall, Senior Design Manager, from the Hasbro Marvel Brand Team at San Diego Comic-Con this morning. We chatted about the Marvel Legends reveals thus far at SDCC 2018, including Black Panther wave 2, new additions to the Vintage and Ultimate Riders lines, themed exclusives like the Walgreens Fantastic Four figures, and what they’d like to see if the Disney / Fox deal comes through.

Our video of the Marvel panel is shot in the 180-degree format. If you maximize the video on your screen, you will be able to scroll and enlarge for a better look at the action. Enjoy!