Have I mentioned that I love the Pile of Loot feature at Big Bad Toy Store?  It helps offset one of the disadvantages of shopping online – the shipping costs.  Pile of loot lets you combine orders to bring your overall shipping costs down, with the added convenience of being able to place your orders separately.  The first order in your pile gets the bulk of the shipping costs, but as you add extra items whether it’s that same day or weeks later, you only get charged the incremental shipping.  When you can’t wait for your items anymore, you tell BBTS to ship your pile, and start over again.

Anyways, I just got my latest pile of loot, and right at the top were Baddathiir and the Helm of Xaanm, the BBTS 7th Kingdom exclusives from this year and last.  Since I’m cherry-picking the 7K exclusives again this year, I’ve been reviewing them in drips and drabs as I get them.  I got Queen Alluxandra and Isadorra at San Diego Comic-Con and the RTM exclusive Raavia and the Shield of Draumm a couple weeks later. 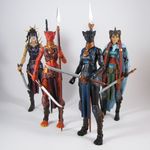 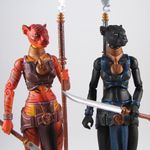 I’m going to be brief, because Baddathiir is essentially the same figure as Raavia and the other cats with the exception of the paint job.  The basic review is going to be consistent across all the figures in this series – excellent sculpting and articulation that is hindered by the “skirt” and weak joints, particularly in the elbows.

From the Four Horsemen’s original announcement, I found Baddathiir the most striking of the cats, and she doesn’t disappoint now that I’ve got her in my hands.  I do have some thoughts specific to this figure.  I had no problems getting Baddathiir to hold a standing pose, whereas Raavia is very difficult to keep standing.  I haven’t looked closely enough to figure out what accounts for the difference.  On the negative side, she’s cast in white plastic and sprayed black, after assembly, it appears.  On her right shoulder is a nice white spot from where the spray was blocked by the bicep – twist the bicep and you’ll see it.

Big Bad Toy Store has a second cat available, Biggara, the white tiger, but I think I’m done with cats for now. 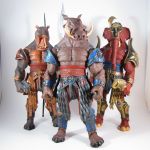 When I first saw this figure, I fantasized about making a Marvel Razorback custom – but that’s expensive fodder.  Like with the RTM exclusive Shield of Draumm last year, there were just too many variants to think about.  But when I added Baddathiir to my pile of loot, I saw Xaanm listed on sale (and he’s on clearance at $9 as of this writing).  So I couldn’t resist any longer.

Of last year’s exclusives in my possession, he’s got the sturdiest joints.  The Four Horsemen went through a couple of production runs to get the figures to meet their standards, and joint strength was one of the issues.  I don’t know if I was just unlucky with my RTM and Fwoosh exclusives, or vice versa with Xaanm.  As I add more of the variants, I’ve noticed that they have each come with a unique weapon, in this case, a battle axe.  It’s too bad we couldn’t see such variation with the cats in this year’s set.

To pick up these BBTS exclusives and other 7th Kingdom figures, visit BBTS at: http://www.bigbadtoystore.com/bbts/menu.aspx?menu=999