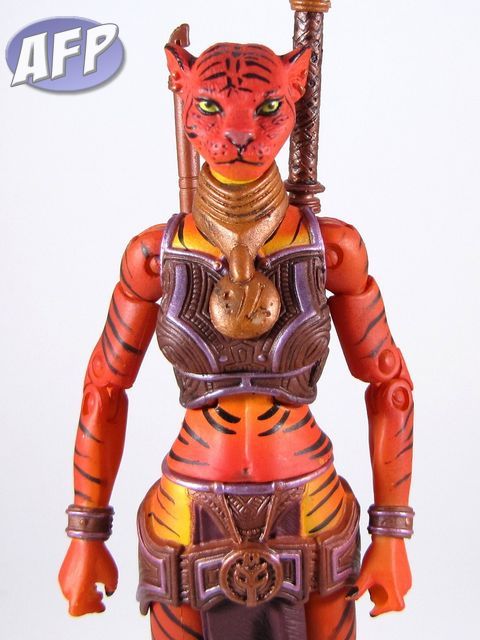 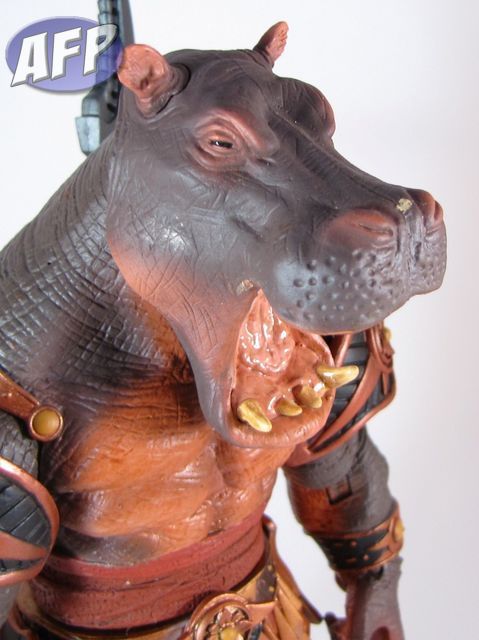 Last week I reviewed Queen Alluxandra and Isadorra, the first two exclusive figures from the Four Horsemen’s Seventh Kingdom line.  I picked those up at San Diego Comic-Con, but there’s plenty of variants that are just starting to become available from the various online media and retail outlets that the Four Horseman have been partnering with to bring you this line.  This review covers the first one of those variants that I’ve picked up, Raavia the red cat, from Raving Toy Maniac.  As a bonus, I also picked up RTM’s Fantastic Exclusive from last year, the Shield of Draumm, the hippo from Ramathorr’s council of guards.

Before I get ahead of myself, I want to point out how great it is dealing with Rob and Bobbi, the good folks that run RTM.  They put up their order page for Raavia on Monday, and by Thursday I had these figures in my hands.

I talked in my Alluxandra / Isadorra review about their packaging.  Raavia’s is identical, so I am guessing that all this year’s exclusives will feature the same cardback.  I continue to be a fan of the easily removable bubble – you can just unbend the plastic that folds over the card edge and then slide the card out.  But I do want the Four Horsemen to upgrade to the clear rubber bands that are all the rage these days.  There’s only two wire clippers in this house, but about a million pairs of scissors, so undoing the four twist ties on Raavia reminded me how much I hate them.  The Shield of Draumm had five twist ties, so I raided my wife’s craft supplies and used her wire clippers.  She will curse me when she finally finds those clippers buried under a pile of loose action figures.

The hippo’s card is so huge I had trouble getting good pics of it.  My photo cube is set up on a pretty shallow table, and I haven’t picked up a cheapo tripod to use for bigger items like this.  The Fantastic Exclusives last year didn’t have the easy-open bubbles – they’re glued to the cardbacks.  Other than that, the packaging is very similar in design to Raavia’s.  It also includes some great artwork by Nate Baertsch, aka Baena from the Fantastic Exclusive Forums.  Let me once again pimp his website – Nate Baertsch Illustration.

Since the Horsemen designed this round of figures with lots of reuse in mind, I’m hesitant to go through the standard review again – I don’t want to just cut and paste it from last week’s review.  So let me summarize – great sculpt and detail and tons of articulation, but that articulation is hindered by the “skirt” that hides the hip joints so elegantly and some fragile joints in the elbows.  One difference from last week’s ladies is that Raavia has a harness on her back that her sword and spear snap into, although the spear handle is a bit thicker and tends to pop out.

The other cat variants have counterparts in nature, but I couldn’t find any for Raavia.  So I asked Bobbi how they came up with the design.  She told me that Rob did some research on red cats and shared the reference material with the Horsemen.

For those of you keeping track, here’s the parts lineup based on who I have so far: 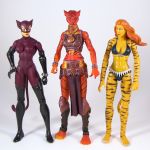 Like Alluxandra and Isadorra, Raavia is compatible with many different figure lines, including the Seventh Kingdom, of course.  One thing that I think does stick out is the difference in head size from her human counterparts.  Her head is quite a bit smaller, and in concert with the very long neck, gives her proportions a very different feel.  Also, her head is textured with fur, while the rest of the body is not, presumably to promote reuse across the wave of figures.

To give her some color depth, the red is painted over yellow plastic.  In her shoulder joints and on her “skirt” you may find too much yellow coming through.

Shield of Draumm, the hippo

I didn’t pick up RTM’s hippo last year.  It wasn’t because I didn’t like it – it was because I was just overwhelmed with the number of different variants available.  I guess I am feeling like that again this year.  But bundled with Raavia, I couldn’t resist it.  There’s an insane amount of texturing and detail on this figure.  Tons of articulation.  I really love the headsculpt here, but would still have preferred either a closed or articulated mouth.  It looks great in action, but is the world’s longest yawn in vanilla poses.

The sheer mass of the Shield of Draumm really illustrates how drastically the action figure industry has shifted in just a year.  Outside of the build-a-figure concept, I don’t think anyone can really afford to produce action figures as oversized as this one is anymore.  For the next Fantastic Exclusive, the Four Horsemen have said that Scarabus and his crew will be regular-sized, in order to keep the price down in the range to which we’re accustomed.  If they keep up the trend exhibited by RTM’s exclusives, I think I’ll be struggling with how many of the variants I want to buy next year too.