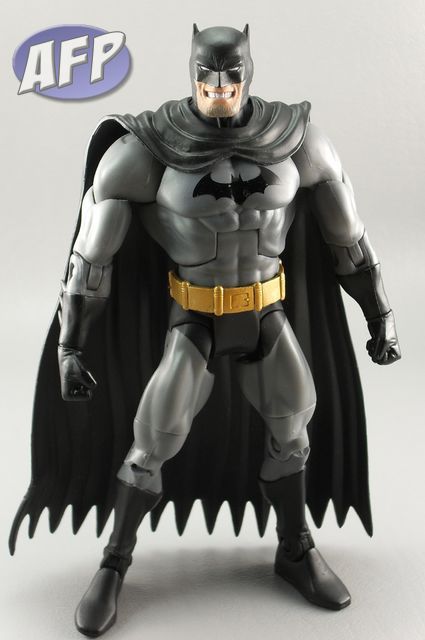 First off I have to give Ron props. I loved his CustomCon 24 DC Universe Classics Earth 2 Customs and they (especially the Robin and Batman) were a big part of the inspiration for making this G.D. Batman. If you haven’t seen them, definitely check ’em out.

Initially I got the idea for this custom while I was putting together my Superman/Batman: Public Enemies Wave 2 review. I love to kitbash so I was trying some head swaps and popped the DC Direct All-Star Batman head on a Public Enemies Batman bod and thought it looked damn good. Then I remembered Ron’s Earth 2 customs and realised a new custom project was grinning psychotically back at me.

DCD All-Star Batman Head – As I said above, I did the head swap first and luckily it popped on perfectly and didn’t have to make any mods to get it to work on the neck peg.

DCUC Gotham City 5 Batman Forearms and Lower Legs – I was thinking about sculpting the tops of the boots and gloves (the PE gloves and boots are just painted on) but remembered (thanks to a comment from Fwoosher, RoboKillah) that I was trying to make this an easy custom. So I tried the DCUC Batman’s Forearms and Lower Legs on him and was content with the results.

DCUC Generic Black Fists – I wanted this Batman to have fists instead of the “grip” hands but the pegs on the fists from the PE Batman don’t fit well into the DCUC forearms. Rather than mod them I found a pair of black DCUC fists in my fodder and popped them right on.

DCD All-Star Batman Belt – This was probably the hardest part of the custom. I used a small flat chisel to pop open the crotch on the PE Batman by pressing it with slow even pressure into the seam on the underside of the crotch until it opened up.

You need to be VERY careful if attempting this and wear a THICK leather glove on the hand holding the figure because if you slip, the chisel will make a nice puncture wound in your flesh. I know from experience. Once the crotch is opened, I warm the belt with the hair dryer a little to make it pliable and getting the crotch off a little easier. To get the belt off the DCD AS Batman I used my hair dryer to heat n’ pop one of the AS Batman’s legs off (it’s a socket swivel at the hip) and then I heated the belt a little to loosen the glue and gently worked it off the figure. You might need to heat it a couple times while doing this. Then I put the DCD belt in place on my custom and used Gorilla Super Glue to put the crotch back together. Be careful not to get glue on the hip swivels.

DCD Trinity Batman Cape – This is the last thing that I put on the custom but I’ll go over how to get it off the DCD figure. Like removing the belt from the AS Batman, I used my hair dryer to heat up the cape a little where it attaches to the body and gently peeled it off. You’ll see that it has raised nubs on the underside that anchor it to the DCD body. Those need to go or it won’t lay flat. I used my dremel with a 240 grit sanding drum to sand them down. You have to be careful and pay attention to what you’re doing so as not to damage the cape. I wasn’t and wore a small hole in mine. 🙁

Of course you could always take the easier route and use the cape from the PE figure. 😉

The gray on the DCUC forearms and lower legs is a little lighter than the gray on the PE body so I had to paint those.  But before I painted, I took the DCUC limbs off, gently sanded the gray parts with some 600 grit sand paper, then washed and dried them and put ’em back on. I find that a light sanding really helps paint adhesion. I didn’t have an exact match to the gray of the PE figure, the closest I had was Model Masters Gun Ship Gray but it was a little too dark. So I mixed a drop of Light Ghost Gray and couple drops of the Gun Ship Gray and got a pretty close match.

You’ve probably noticed that I changed the Bat symbol on my custom. I didn’t like the placement of the Bat on the PE Batman, to me it was too high on his chest. To change it, I used some 320 grit and 600 grit sand paper to erase most of the Bat and then repainted the chest with my gray paint mix. The new symbol is a vinyl sticker that was custom made for me by a friend but you could easily decoupage one on like Ron did with the symbols on his Earth 2 Robin and Batman. And just like I said about the cape, if you’re okay with the factory painted Bat symbol, you can leave it and make life even easier for yourself.

The factory paint job on the head was pretty sloppy for a DCD, so I also did a little touch up painting on his face to tighten up the mask lines and drybrushing to make the stubble better.

The next to last step was attaching the cape which I did by positioning it and brushing glue onto the underside of it. This would’ve been the last step had I not made a hole in the cape. As for the hole, because it was on part of the cape that was glued down, I was able to fix it with some black Apoxie Sculpt and a little black paint. It’s not perfect but it’ll do until I score another of those capes and swap it out.

Whew, that was a lot a chatter for a quickie custom. Thanks for looking and I hope the info helps someone out.