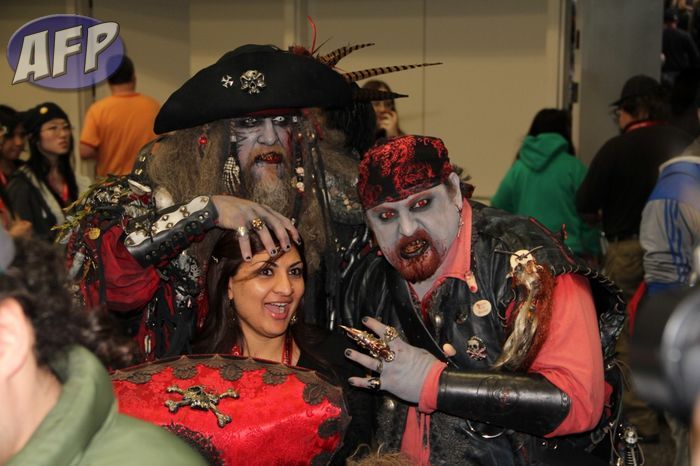 I love that WonderCon is a local show for me. Toy Fair is a trek, and even though San Diego is a short hour and a half flight away, it’s great not to have to deal with airports and hotels to soak in some pop culture and toys. But one thing that’s definitely changed in the past couple of years is how many people are showing up to WonderCon. It doesn’t have nearly the space or exhibitors compared to San Diego Comic-Con, but it’s starting to match SDCC in terms of people density. And a lot of those people show up in costume.

One difference though, is the ratio of cosplay to booth babes. As a smaller (but growing) show, there weren’t a lot of exhibitors that are willing to shell out the extra cash for booth babes.

Do these girls know something I don’t? Phoenix was definitely one of the more popular costumes. I must object to the pairing of her with Captain America, though. 🙂

I was really expecting a lot more of Thor and Batman. And I didn’t catch any Green Lanterns at all.

With the crowds and no real plan of attack for the floor, I made my exit, only to run into a mob of Stormtroopers and Clonetroopers – seventy or more of them, with a handful of Imperial Officers, Sand People, Jedi, and one Darth Vader – gathered for pictures. There were a couple of Clone Trooper kids who were pretty bushed by the whole affair, and one kid in a “Judge me by my size, will you?” t-shirt that was moving too quickly to be photographed. Definitely a future Jedi in the making.

I was psyched for free samples of Silk – lactose free soy milk – but was definitely bummed when the chocolate Silk dude knocked my cup by accident and gave me my sample in my bare hand instead. Damn you, Silk dude!

Here’s the rest of the pics. Enjoy!

One thought on “WonderCon 2011 – Booth Babes and Cosplay”