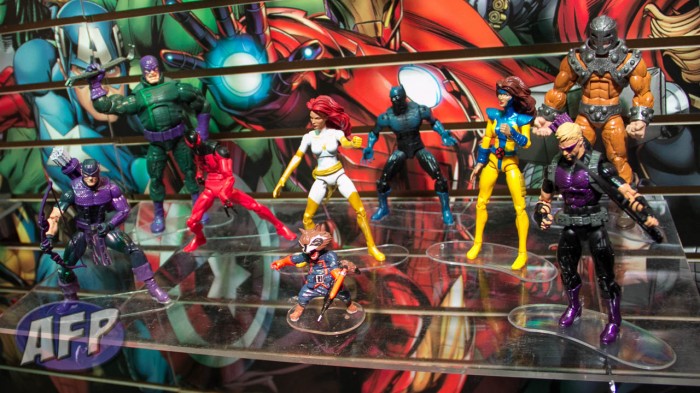 Fans of 6-inch Marvel action figures, there’s good news from today’s Toy Fair presentation from Hasbro – Marvel Legends is continuing to go strong in 2013 with the main Legends line and not one, but two movie-supported sister lines in Iron Man Legends and Wolverine Legends. We got to see one full never-before-seen wave for each of the three, including the Build-A-Figures. And in the case of the main line, were clued into some character choices for the next wave.

First of all, let me state that Hasbro is continuing to show the running change variants – Sentry, Iron Fist, and X-Force Archangel were on display. Since the Red Deadpool and Future Foundation Doom have reportedly started hitting in Asia, I expect we will still see the variants for current waves too.

For 2013 Wave 2, we will continue to see running changes. The Wrecking Crew gets the Wrecker and Bulldozer. Hawkeye shows up in both classic and modern looks. And Jean Grey will get not two, but three variants. We saw the White Phoenix and the Jim Lee versions in the showroom, but Hasbro also teased us with an Age of Apocalypse Jean Grey, who will finally be reunited with that AOA Wolverine from the Toy Biz Giant Man wave.

Black Panther and a “Scarlet Spider-Man” – the new Kaine Spidey – round out the the wave, including the mini-BAF, Rocket Racoon. He looks to leverage the sculpt done for the Marvel Universe Guardians of the Galaxy team pack.

During the slide show we saw artwork (from Billy Tan) for 2013 wave 3 – get ready for Moonstone, Songbird, Batroc the Leaper, and a classic Blizzard. All I can say is AWESOME.

The first wave of Iron Man Legends has hit store shelves. We got to see the second wave and the completed Iron Monger BAF.

Folks hoping for a movie version of Iron Patriot will get their wish fulfilled with Wave 2. The comic version in Wave 1 reused the Extremis Iron Man, and the movie version reuses the movie War Machine. We will also get the Mark 42 version of the Iron Man armor. And, to finally right the wrong perpetrated on us by Jesse Falcon oh so many years ago, Hasbro is making a classic Ultron. And that head looks fantastic. I did hear Jesse saying he has requested a canine head to replace the one we saw today. (I am totally kidding. Don’t hate Jesse Falcon.)

And to round out the 6-inch Marvel figures (at least the ones for collectors), Hasbro surprised me with Wolverine Legends.

It’s great to see that Hasbro’s got enough faith in 6-inch comic-based figures to produce another sister line to Legends. Wolverine’s got a movie coming out, but the character choices are tied to what’s happening in the books. We’ve got new renditions of Emma Frost and Rogue. Emma was pretty much decried as the worst of Hasbro’s entry into Marvel Legends, and Dwight Stall did throw down the gauntlet saying they could do better. I think we’re getting there. The last Rogue we saw was from Toy Biz’s X-Men Classics line. That figure too had its problems, and this new version is a marked improvement.

I don’t recognize the Sabretooth look, but he’s appropriately large, using a good base body for him. Cyclops is shown here in his Phoenix costume from the recent Avengers vs X-Men travesty. During the slide show they also showed his current costume. I’m not sure if that means running change – I’ll have to ask. The BAF continues with the Mini theme for the year – Puck is getting his shot at the big leagues, and I am wondering if it’s his turn in Uncanny X-Force (with those wonderful blacked out cussing) that’s giving him the boost he deserves.

Alright – gotta get going. Stay tuned for more Hasbro updates when I can come up for air! Excelsior!