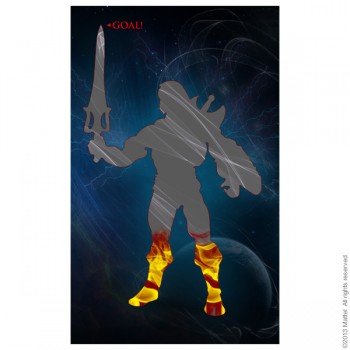 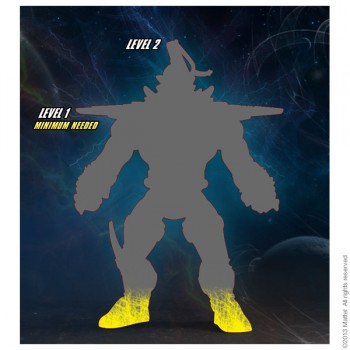 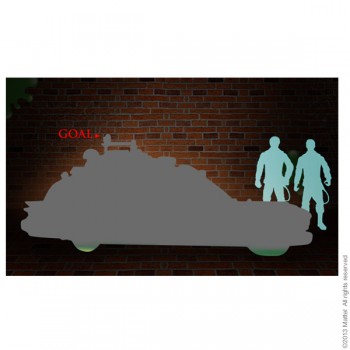 It’s just been a week since the Mattypalooza panel at San Diego Comic-Con, but Mattel has already alerted fans that the 2014 subscriptions and the Ecto-1 pre-order are “quite below” expectations, despite them opening up the subscriptions several weeks early. Call it scare tactics, sales and marketing, or just the plain unvarnished truth – Toy Guru is once again warning fans that pre-orders for the Club Eternia and Club Infinite Earths subscriptions and the Ghostbusters Ecto-1 pre-order have to hit their minimums or they’re not happening.

And while, thank Grodd, they’ve replaced the thermometer graphics this year with product silhouettes, the picture they paint right now is pretty daunting. There’s under three weeks to go to the August 19 deadline.There are concerns that have gone unaddressed the past few years, like big cash outlays without knowing the line-ups and the risk of being saddled with unwanted figures, but I’ll just point out some obvious red flags for the 2014 offerings. 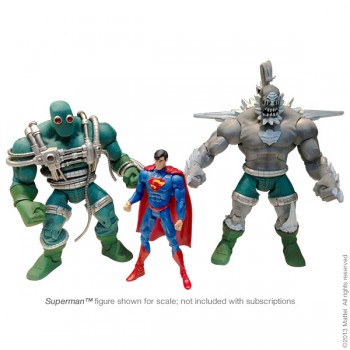 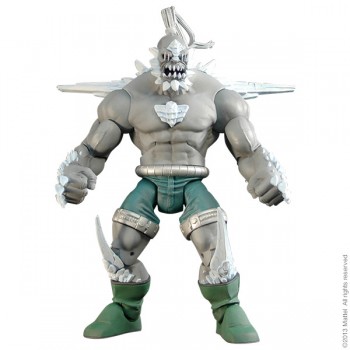 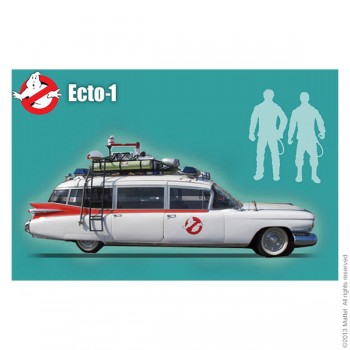 Club Eternia: It’s challenging enough that so many of the big hitters have been done that more casual fans are wondering what potentially unwanted figures (up for debate: the Star Sisters and Fighting Foe Men) are going to hit this year, with three quarters of the year to be announced. But to take the Club exclusive and throw up a question mark? I wonder how many potential subscribers were turned off by that. I love the Four Horsemen’s work, but I don’t think Mattel should expect the fans to line up for the sub just because Eric Treadaway says the exclusive is cool. Seeing is believing, right?

Club Infinite Earths: With the last vestiges of collector-oriented product dying at retail, you’d think the DC subscription would be taking off. Add one of the most requested characters as the Club exclusive and it should be a surefire winner. But, just to throw in a wrench, Mattel adds the level 1 and level 2 business. Let me ask you – is there anyone out there that prefers the jail-suited version of Doomsday over the Doomsday that killed Superman? Anyone? Bueller? I’m pretty sure that there’s a lot of people out there that don’t want to risk ending up with a crappy Doomsday if the sub doesn’t hit level 2.

Ghostbusters Ecto-1: Simple – $215 plus shipping. A lot of Ghostbuster fans were let down by the early demise of the action figure line. I’m not sure how Mattel is expecting to get this vehicle made when it’ll cost about 4X what the 1966 Batmobile will cost at retail. Fans haven’t forgotten that the figure line is as dead as Slimer. Young Justice fans couldn’t get behind a $50 2-pack when that line was dead at retail. Ghostbusters may have a bigger and more devoted fan base, but that price tag is a killer.

Maybe it’s time for Mattel to put on their marketing hat and rethink how they go after collectors. The old ways may have succeeded for Mattel, but have soured the experience for a growing number of subscribers. With three licenses that are in their decline, it’s just going to get tougher. Remember, Mattel – when it’s all-or-nothing, sometimes you end up with nothing.

Just got back from San Diego Comic Con. We had an AMAZING show showing off the rest of our 2013 line up and huge sneak peaks of our 2014 lines including the subscription figures for Club Eternia, Club Infinite Earth and our Ecto 1 presale.

With that in mind, I wanted to clarify for fans where we are and where we hope to go. A lot of folks have been asking about the meters for the different subs and the Ecto 1 presale. Some asking if they are just “marketing gimmicks” or flash and substance filler. The straight and narrow is they are not. They are 100% indicators of where the subs and the presale currently are. While not updated daily, as they are updated on a semi weekly basis the meters do show the current status and are designed really to be a communication tool for our customers to explain and illustrate where each sub level/presale is.

The bottom line; if we do not hit the minimum for tier 1 for both subs and the minimum for Ecto 1, these lines and items will likely not happen. A lot has changed in the toy industry over the last few years. Factors like labor, raw materials and transportation have skyrocketed and in order to continue bringing collectors high end Mattycollector toy lines we are really at a point of being subscription and presale dependent. This isn’t 2004, or even 2008 anymore!

At this time, both of the 2014 subs and the Ecto 1 presale are quite below our expectations. We want nothing more than to see both clubs and the amazing Ghostbusters vehicle move forward. But we can’t do that if we don’t hit the bottom level of sub holders. This is very similar to “Kickstarter” campaigns. Only for the subs and Ecto 1, due to the logistics of the toy making process, we need to lock in our quota and customer base early before we start spending on tooling and other fixed costs.

Because of this, Aug 19th is the DEADLINE for both subs and hitting the bare minimum on the Ecto 1. While we hope to keep the Ecto 1 presale open longer after Aug 19th to gain additional presales, if we don’t hit the minimum by Aug 19th, the Ecto 1 will also close down.

So now is your time! Glimmer! Aquaman! Two Bad! Superboy! Ecto 1! These meters are not a marketing gimmick, they are our way of offering open honest communication to let our customers know how each sub presale is going. Please help spread the word! We only have a few short weeks to make these great toys happen. I’d hate to wrap things up in 2013, but if the subs and the Ecto 1 don’t hit the minimum we may not be going forward. Remember after all what happened to the Ghostbuster 6” Club and even the Superboy/Miss Martian YJ pack. When the minimum presale is not met, we just can’t go forward.

Aug 19th will be here before we know it! Let’s get out there, spread the word, blog, socialize and let everyone know where to sign up for some of the best collector toys out there!

I’ve seen a lot of emails and posts over the last few days about the meter and reaction to my post on Facebook yesterday that we are still tracking below expectations. Let me see if I can clear up some common questions.

1:The meter is 100% accurate. It is not a scare tactic. It was designed as a communication tool to let fans/customers know how close or far we are from the sub happening.

2:If the meter is not hit, what will likely happen is the 4 figures that are already tool’d (the ones revealed at SDCC) will be released quarterly and perhapes an item at SDCC. After that, that will be it. End of story. It is not a scare tactic, it is a truthful statement. MOTUC and in fact everything we do on Matty is a tiny tiny spec for Mattel. We continue to make these great toys because we love our fans, we love these brands and we want to keep them going. But the raw facts are in today’s market we simply can’t keep these high end low run collector lines going with out guaranteed customers. That is why we have the presale sub and the meter to communicate how far along we are.

3:We can’t reveal additional figures simply because we don’t have anyone far enough along to reveal. We can only reveal a figure after an internal milestone called “FPR” (Final product review). We revealed eveything at SDCC that had made it to this stage. Counting the “sneak peaks” at the panel and in the case on Sunday, we’ve revealed 5/12 monthly figures. So customers know about 1/2 of the entire year at this point! The reason we don’t reveal more figures is because we don’t want to show something that might not happen. For example, in the DC brand, a few retail figures were shown at NYTF in Feb. like Damien Wayne and a new Batman Beyond that were canceled. Have you seen the posts about this? The last thing we want to do is reveal a figure that might not happen. That is a lot worse, believe me. That is why we don’t reveal figures that have not made it to FPR stage internally. We don’t want to show something that might not happen or be changed. We need to wait until FPR stage to reveal.

4: A lot of the issues last year like QC and CS have really been tackled head on as promised. Combine that with our sub portal letting you easily change addresses or make adjustments as well as a new quarterly shipping option that will help save on overall shipping. Shipping is an area we just don’t have as much control over, but we are doing everything we can and by offering a hold and ship quarterly option you will be able to save.

5: Again, I know fans want to see the entire year, but this is the 4th or 5th year of doing this.You guys know the drill and as noted above the reasons why we can’t show further figs. They just aren’t far enough along. And really, in today’s market, the customers we need to keep all of the subs (and the Ecto 1) going are customers that are “all in” no matter what. It really shouldn’t matter which figures we are doing, the type of customer needed to keep the line going, the customer that is the life blood of these lines is the type of MOTU (or DC) customer who wants anyone no matter what. In today’s market we just can’t build a line around cherry pickers. Subscribing isn’t just about the bonuses of subing in like the Unnamed One, Early Access or less expensive figureds ($25 vs $27 day of). Sub’ing in is about supporting all of the figures and ensuring the line itself goes forward. The question is do we have enough of this type of customer? I think so! We did in 2011-2013!

6: We have indeed re worked the line up and as seen by our reveals at SDCC 23014 is packed full of A list charcters. No concept figures like the FFM or Vykron. 2014 and ideally 2015 will be all the figs we want to complete the line including vintage MOTU, vintage POP, A list NA figs and A list figs from other media like mini comics or animated series. The SDCC reveals should have confirmed this.

So to wrap up, I promise this is not a scare tactic or a roller coaster ride. The meters are 100% accurate and show the sub in level. Without hitting our goal, likely we will just release the first 4 figures and call it a day.We just can’t keep these lines going without locked in support anymore.

Hope this helps. If anyone is not sub’ing in and you have a sepecific reason, please post here or over in Ask Matty MOTU/DC and I’ll do all I can to address your questions.

Getting 2014 to happen will take all of us and a combined effort. No one wants to see MOTUC go away, but without the min number of sub holders, that is a very realistic possibilty. Not a scare tactic, not a marketing gimick, just us being as open and honest with our customers as possible!

7 thoughts on “MattyCollector Subscriptions and Pre-Order Push – So it Begins, So it Ends?”