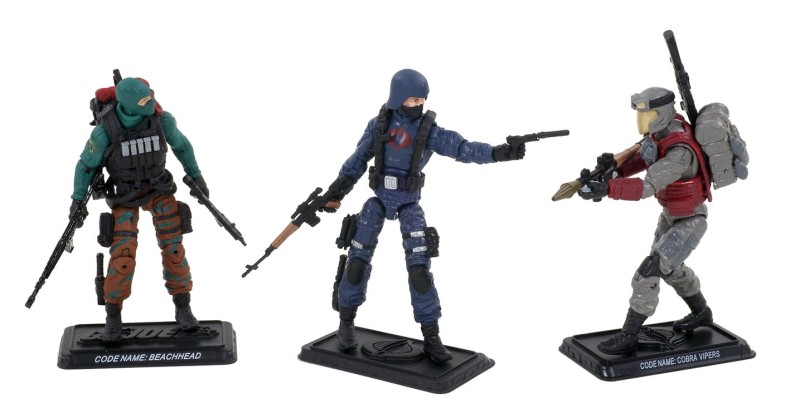 After a resurgence with their 25th Anniversary line, Hasbo’s G.I. JOE brand has taken a beating the past five years. This is thanks in a big way to lackluster performance of both G.I. JOE movies. Rise of Cobra in 2009 was considered enough of a dud (despite clearing over $300MM worldwide box office) to delay Retaliation to 2013, wreaking havoc in a line that was already heavily ordered at retail. Without the backing of the sequel at retail, the line sputtered and died – and even though Retaliation surpassed its predecessor, the damage was done.

This year, Hasbro has managed to extend the life of the brand by going the retailer exclusive route with Toys R Us. I’m glad to see the line continue, but it’s a tough road ahead. Retaliation did well enough to warrant another sequel from Paramount. And while a director and writer have been attached, no release date has been set – how long the JOE brand can maintain itself in absence of TV or movie support has yet to be seen.

Here’s what’s coming (thanks to HissTank.com for the details):

As the line’s gone retailer exclusive, there was no space allocated in the showroom for the figures (although a healthy presence in KRE-O will grace a future Toy Fair update). Hasbro did provide us with hi-res product shots.

PAWTUCKET, R.I. – February 15, 2014 – Hasbro, Inc. (NASDAQ: HAS) today unveiled initiatives planned for the 50th anniversary celebration of its iconic G.I. JOE brand at the American International Toy Fair in New York City. The storied property, which invented the “action figure” toy category, celebrates its incredible five-decade history by partnering with Toys“R”Us as the official toy headquarters for the G.I. JOE brand in 2014. Kids and fans can look forward to a special edition 50th anniversary-branded action figure line available only at Toys“R”Us stores nationwide and online at Toysrus.com, along with new items in the popular KRE-O G.I. JOE line of building sets from Hasbro, beginning this March through the fall 2014.

Launched at the American International Toy Fair in 1964, the “original action figure” debuted as a 12-inch pose-able soldier toy, G.I. JOE has been a pop-culture phenomenon ever since. The property evolved over the years, from the original 12-inch action figure in the 1960s, the ADVENTURE TEAM in the 1970s and the G.I. JOE vs. COBRA saga which was introduced in the 1980s with a 3.75-inch action figure line, comic book series and legendary animated series G.I. JOE: A REAL AMERICAN HERO. Recently the brand has introduced two blockbuster movies based on the saga including G.I. JOE: THE RISE OF COBRA and G.I. JOE RETALIATION from Paramount Pictures.

“The G.I. JOE brand is a pop culture and childhood icon whose cultural relevance, based on its core essence of action, bravery and the compelling characters from G.I. JOE vs. COBRA saga, continues to inspire the imaginations of kids and fans around the world,” said John Frascotti, Chief Marketing Officer, Hasbro, Inc. “From action figures and publishing, to animated series and global blockbuster movies, few properties have the cultural resonance and enduring appeal. In the 50th anniversary year of the G.I. JOE brand Hasbro looks forward to delivering fan-favorite action figures, exciting new publishing ventures and innovative but nostalgic KRE-O building sets to the brands most ardent fans and newest recruits.”

“For generations, Toys“R”Us kids big and small have cherished the G.I. JOE brand and brought its legendary characters to life through play,” said Lisa Harnisch, Senior Vice President and General Merchandising Manager, Toys“R”Us, U.S. “We are proud to partner with Hasbro to help commemorate this golden anniversary, and are eager to bring an exciting assortment of G.I. JOE figures, including classics and new items from the hit KRE-O line, exclusively to Toys“R”Us customers this year.”

Beginning in March, exciting new KRE-O building sets will let kids and collectors alike build vehicles and environments to play out the G.I. JOE vs. COBRA fantasy. Collectible blind-bagged KREONS of popular G.I. JOE characters will also hit shelves, including characters from both the heroic G.I. JOE team like LADY JAYE and FOOTLOOSE, as well as the villainous COBRA organization like TOMAX and SCRAP IRON. As part of the 50th anniversary celebration, Hasbro and Toys“R”Us are bringing one of the most popular G.I. JOE vs. COBRA playsets from the 1980s back in KRE-O form with the KRE-O G.I. JOE TERROR DROME Building Set. This iconic set features over 850 pieces and will be available in the fall.

Additionally, a collectible 50th anniversary-branded, 3.75-inch scale action figure and vehicle line will debut at Toys“R”Us this fall. The special edition line will be offered in unique 50th anniversary branded packaging and reintroduce classic G.I. JOE vs. COBRA characters and iconic vehicles, including some that have not been available since the 1980s. Fans will be able to purchase classic characters like DESTRO, SNAKE EYES and HAWK, as well as vehicles like the G.I. JOE VAMP MKII and COBRA WOLF VEHICLE with an updated sculpting style and unique deco.

The 50th anniversary year will also continue the G.I. JOE brand’s long tradition of publishing and rich storytelling with exciting new programs from Hasbro’s partners. IDW Publishing’s G.I. JOE: A REAL AMERICAN HERO will release its landmark 200th issue in March 2014, continuing the story of the original 1980s G.I. JOE comic by original writer Larry Hama. IDW will also launch TRANSFORMERS/G.I. JOE, a series uniting Hasbro’s iconic brands, by acclaimed creators Tom Scioli and John Barber this summer. Additionally, as part of its publishing program, Hasbro is opening the fantasy to fan participation. Amazon Publishing recently announced that Kindle Worlds has reached a licensing agreement with Hasbro to open up a new Kindle World based on the G.I. JOE brand. With the launch of the G.I. JOE Kindle World, writers will be able to publish their own original fiction starring iconic G.I. JOE characters like DUKE, SNAKE EYES, and COBRA COMMANDER and sell their work on Amazon.com. The G.I. JOE Kindle World will open for writers to start publishing stories in the next few months.

This spring, the official G.I. JOE Collector’s Club will host the 21st annual G.I. JOE fan convention, known as “GIJoeCon,” in Dallas from Thursday, April 10 to Sunday, April 13. Convention organizers plan on celebrating the 50th anniversary with exclusive action figure sets, special G.I. JOE guests from throughout the brand’s history and the opportunity to meet and interact with other fans of the brand. Fans can learn more about the Hasbro-sponsored convention by visiting www.GIJoeCon.com.

About Hasbro, Inc.
Hasbro, Inc. (NASDAQ: HAS) is a branded play company dedicated to fulfilling the fundamental need for play for children and families through the creative expression of the Company’s world class brand portfolio, including TRANSFORMERS, MONOPOLY, PLAY-DOH, MY LITTLE PONY, MAGIC: THE GATHERING, NERF and LITTLEST PET SHOP. From toys and games, to television programming, motion pictures, digital gaming and a comprehensive licensing program, Hasbro strives to delight its global customers with innovative play and entertainment experiences, in a variety of forms and formats, anytime and anywhere. The Company’s Hasbro Studios develops and produces television programming for more than 170 markets around the world, and for the U.S. on Hub Network, part of a multi-platform joint venture between Hasbro and Discovery Communications(NASDAQ: DISCA, DISCB, DISCK). Through the company’s deep commitment to corporate social responsibility, including philanthropy, Hasbro is helping to build a safe and sustainable world for future generations and to positively impact the lives of millions of children and families every year. It has been recognized for its efforts by being named one of the “World’s Most Ethical Companies” and is ranked as one of Corporate Responsibility Magazine’s “100 Best Corporate Citizens.” Learn more at www.hasbro.com.

4 thoughts on “Toy Fair 2014: G.I. JOE Continues the Fight Against Cobra as a Toys R Us Exclusive”