There’s no substitute for seeing the figures in person, but Mattel has been kind enough to share the big reveals from its Collector Event this afternoon via the Mattycollector site. In previous teases leading up to Toy Fair, Mattel promised a subscription in the likes of Club Filmation in 2013 and a send-off for DC Universe Classics – and they did exactly that. Club Etheria is a six figure sub that apparently will have some day of sales. The previously revealed Madam Razz and Broom land in this sub, which also features Double Mischief, Entrapta, and the club exclusive Light Hope. An additional accessory was shown for one of the unrevealed figures – if you didn’t guess it, Mattel provided a spoiler in the image file name.

As for the DC Universe Classics send-off, Mattycollector will offer 6 figures, 3 each in September and October – with an enticing Collect & Connect if you get all six. It’s a Super Powers send-off, featuring Batman, Superman (in 2 flavors, one of them in the fan-demanded light blue), Wonder Woman, Green Lantern as the Riddler, and Mr. Mxyzptlk. The C&C is Kalibak, in his Super Powers brown colors. It really is a fitting finale for the line, which Mattel and the Four Horsemen have said had its roots in the classic Super Powers line.

Finally, Rio Blast was revealed as the September figure for Club Eternia. For fans of the Spirit of Hordak chase figure, Mattel will repeat that in 2014, with a Kowl and Loo-Kee 2-pack. And in a licensing move that feels odd to action figure collectors, Mattel is making Hot Wheels from Marvel Comics. And there’s much more – read on for the press release and pics.

2014 Toy Fair Reveals Straight From the Action in New York

Toy Fair is happening at this very moment! Sure, it’s insider-only, but we’ve got the scoop for you right here, with the latest, most up-to-date news and reveals from the Masters of the Universe® Classics and DC Universe lines. We start with BIG news about a new add-on subscription…

Get ready for our new limited subscription arriving in July to celebrate the 30th Anniversary of She-Ra®! Similar to last year’s add-on Club Filmation, we’ll have 6 new figures, shipping July through December, and subscribers will also receive a club-exclusive figure that will never be sold separately on MattyCollector.com or anywhere else by Mattel, making it a must-have for collection-completists. Club Etheria™ goes on sale Monday, 2/17 from 9 a.m. PT to Monday, 3/10 at 11:59 p.m. PT. The figures revealed include:

Sinking into the sewers, the battle for Gotham City has gone underground to the slimy stomping grounds of Solomon Grundy. His evil team featuring The Joker and Two Face is no match for Batman™ with his super-sized swords and his trusted allies. Your slime is up, Grundy!

A milestone in modern toy collecting comes to a close as the DC Universe Classics and DC Signature series makes a heroic finale. But we wouldn’t ride into the sunset without one final hurrah for our fans! Now, as we celebrate both the end of DC Universe Classics and the 30th anniversary of Super Powers, we’re proud to present a final six figure series in Four Horsemen style, with packaging harkening back to the classic 80′s toy line. As one era ends, we celebrate the entire modern history of collecting DC Comics action figures with the DC Super Powers 6″ collection!* 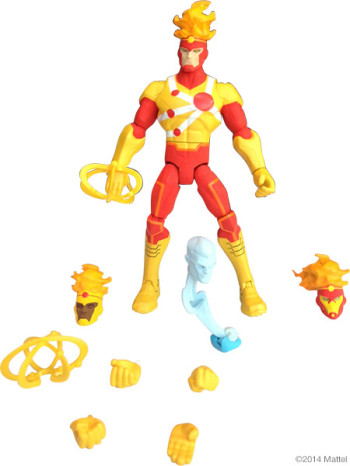 Among the reveals from Club Eternia® were this year’s chase figures, Loo-Kee™ & Kowl™. This pair of Etherian creatures will first be available in limited quantities for Club Eternia® subscribers during Early Access in April, priced at $20 for the pair. After that they’ll pop up unannounced throughout 2014, similar to last year’s Hordak® Spirit. Fans also got a look at Goat Man™, the traveling convention figure on sale during April Early Access for subscribers. Goat Man™ will be available for purchase throughout the year at conventions such as Power-Con™, Grayskull Con, and others. (Are you organizing a Con and want Goat Man™ there? Private Message Toy Guru through the Fan Forums on MattyCollector.com.) Also revealed were the heroic warrior Rio Blast™ and a mystery accessory.

Masters of the Universe Minis™

These reveals were big, even though the figures were small. Each 2-pack contains a piece needed to build a mini Castle Grayskull® with a working Jaw Bridge. The last two 2-packs will be revealed at SDCC.

Hot Wheels® Marvel Character Cars
From the super thrilling, action-packed world of Marvel come villains and heroes reimagined as 1:64 scale Hot Wheels® vehicles. Each vehicle features a unique body style and design details that are authentic to each character. This assortment is all-new for fall 2014 and includes 12 unique character cars. Additional characters will be released each year.

Here’s a sneak peek at seven of the releases in this series: