Hasbro Marvel Mighty Muggs! They’re cute, beautifully detailed with sharp paint apps and remind me of SouthPark for some reason. I haven’t been sucked into rabid MU MM collecting, but I picked up my first at SDCC in 2008 – the Mark III from the first Iron Man movie (more on that in a bit). So, I had to get one of the SDCC 2010 Mark VI figures from the sequel. (My wife loves it when I say I *have* to get something.) I figure they’ll make great bookends for my Iron Man TPBs.

END_OF_DOCUMENT_TOKEN_TO_BE_REPLACED

Thanks to our friends in the Marvel, G.I. Joe, and Star Wars brand teams at Marvel and the good folks at Hunter PR, ActionFigurePics.com and TheFwoosh.com are pleased to be give our readers a chance to win one of the upcoming San Diego Comic-Con exclusives or other prizes. Through Tuesday next week, we’ll feature one or more prizes each day. Read on for instructions on how to enter to win.

For Day 1, we’ll start with a couple of Marvel exclusives.

In addition to being available at Comic-Con, a limited number will be available on HasbroToyShop.com after the convention.

END_OF_DOCUMENT_TOKEN_TO_BE_REPLACED 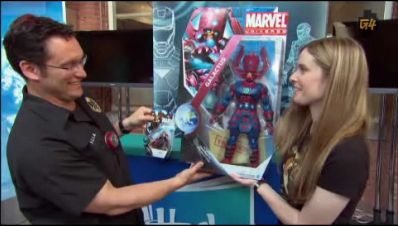 We just got done posting the hi res images for all the Hasbro exclusives for San Diego Comic-Con, and now we’ve got Attack of the Show’s Blair Butler at Hasbro’s HQ in Pawtucket, RI, with Hasbro’s Jerry Jivoin.

Check out that massive that 19-inch Galactus! And the flip up mask on the Mighty Muggs Iron Man is pretty cool too.

END_OF_DOCUMENT_TOKEN_TO_BE_REPLACED

In Toyfare magazine two months ago, we got some looks at the Hasbro Marvel Universe exclusives for San Diego Comic-Con. With a week to go before the big show, Hasbro’s sent us some big pics of all of their exclusives. For those of you not going to be there, all of the items, with the exception of the Star Wars exclusive, are said to be available on HasbroToyShop.com after the convention. 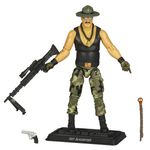 In addition to being available at Comic-Con, a limited number will be available on HasbroToyShop.com after the convention.

END_OF_DOCUMENT_TOKEN_TO_BE_REPLACED

We may be running an Iron Mania week here at AFP, but at Marvel, the entire month of May is devoted to Iron Man.

We’re celebrating the May 7 (April 28 internationally) release of “Iron Man 2” with Iron Man Month 2010! Get ready for a monthlong mega mix of all things Shellhead right here on Marvel.com!

For this week’s Take 10, Marvel highlights ten of their favorite Iron Man action figures of all time.

Every week, a secret cabal of Marvel staffers gathers to discuss the best of the best when it comes to the House of Ideas.