I was avoiding the Teenage Mutant Ninja Turtles movie reboot – the early reports that they would be aliens, not turtles, coupled with the casting of Megan Fox, really turned me off. I just didn’t want to see Michael Bay trample another childhood memory. But I was stuck on another international flight and had nothing else to watch. And to be fair, I thought the movie was good… good enough. It couldn’t possibly usurp the original for me due to nostalgia alone, but I could see how for today’s kids, these new movie Turtles could fill that spot.

So I’m not sure yet how I feel about these TMNT movie figures coming from threezero. They look fantastic – I haven’t looked at frame grabs from the movie, but they seem highly detailed and accurate. The skin textures and paint work look exquisite on these prototypes. The only question mark is the use of a “skin” over an armature in the arms – in my experience that limits articulation and can sometimes wear over time. We’ll see if I pull the trigger next week, when the pre-order window opens. Stay tuned!

END_OF_DOCUMENT_TOKEN_TO_BE_REPLACED

I was really impressed with Buzzy Fret’s pics of the threezero Game of Thrones Tyrion Lannister. If the imp is representative of what threezero can do, then this 1/6 scale Heisenberg will be an indispensable part of your (and my) Breaking Bad collection. I’ve seen a number of custom Walter Whites in 1/6 scale and thought it was a great opportunity for someone to pick up the license – I’m glad it’s threezero. They’ve got the manufacturing chops to do the figure justice, and with the quality of sculpt and paint work we’re seeing from them, I’m bullish that this will turn out great.

To top it off, Heisenberg is coming with a bunch of accessories (more than the imp and Michonne’s pets from Walking Dead), including his hat, glasses, sunglasses, gun, stacks of cash, and more. You can pre-order at threezero’s store for $150 or from Entertainment Earth for $139.99. That’s an exceptional value for this figure – Jesse Pinkman must be in charge of the pricing there.

END_OF_DOCUMENT_TOKEN_TO_BE_REPLACED 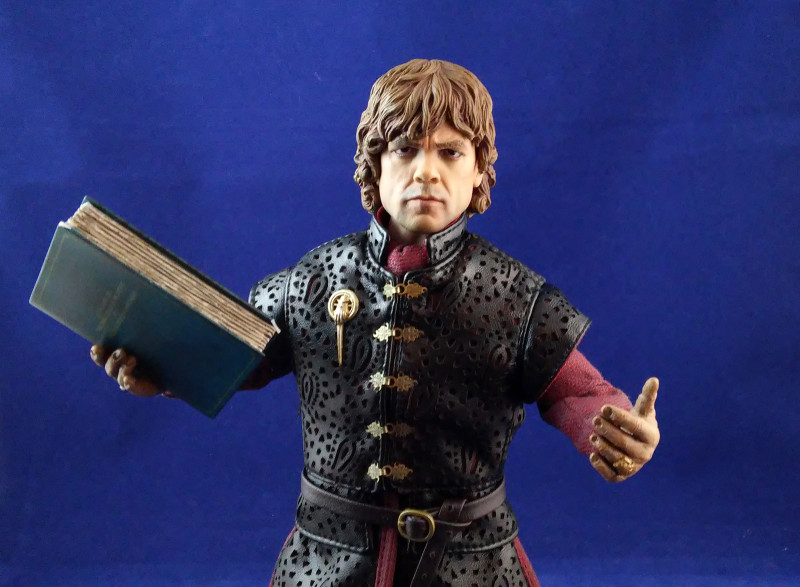 END_OF_DOCUMENT_TOKEN_TO_BE_REPLACED

If you’re a Game of Thrones fan, you were probably going through some withdrawal as HBO didn’t air a new episode this past Memorial Day weekend. You can get your fix by pre-ordering the 1/6 scale Tyrion Lannister from Threezero, which is available to pre-order now. The sister company of ThreeA Toys (or maybe “big brother” is more apt) had been somewhat quiet until its recent foray into licensed product, forging collaborations with Bandai and AMC’s The Walking Dead.

Tyrion stands under 9-inches short and is available for $130, inclusive of shipping. Accessories include 2 pairs of hands, a goblet, and a book. I’d have liked to see a second outfit for the Battle of the Blackwater, but I suppose that might be a bit ambitious for a first figure in a new line. Threezero’s previous pre-order was up for a month, but no knowing how long Tyrion will be available.

END_OF_DOCUMENT_TOKEN_TO_BE_REPLACED

Here’s an unofficial announcement (read: rumor) that is starting to make the rounds. The earliest trace I could find of it is from the BBICN boards – a BBICN member posted that ThreeZero has licensed the Walking Dead from AMC and will be producing 1/6 scale figures, and that they will be on display at San Diego Comic-Con.

I have been posting quite a bit about ThreeA Toys since I jumped on the bandwagon a few years back. ThreeZero is the home of the 3A Toys “Hatchery” – they are the production arm, or factory, that makes the toys. ThreeZero is owned and operated by Kim Fung Wong. He’s also Ashley Wood’s partner in 3A.

Still, this news / rumor is a little puzzling to me. After all, zombies are one of 3A’s mainstays. And 3A has been on a licensing tear, adding a diverse line-up in the past couple years. They’ve got 2000 A.D., Marvel, Valve, Metal Gear Solid, and Real Steel. They just closed out pre-orders for the first figures from their Halo 2 and Lost Planet 2 lines. So it seems odd that Walking Dead would fall under ThreeZero instead of ThreeA.

But who knows what twists and turns happen behind the scenes in the licensing game. We’ll talk to 3A at SDCC and see if we can find out more about this.

Both globally extremely popular American TV has finally launched an official duly authorized by 12 “dolls! U.S. SDCC exhibition there will be physical display, is the first openly black girl Michonnes two brothers [pet] Black ZOMBIE!? Nieye role will be introduced in the end re- it? we may ratio D views Three Zero friends!