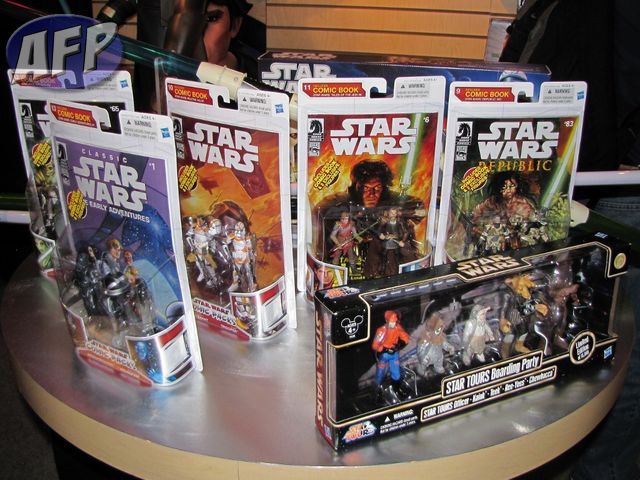 For Star Wars, 2010 will be a more focused year – the comic book packs and Galactic Heroes Cinema Scenes will go on hiatus in the fall – but will still be a celebration of the brand. This year is the 30th anniversary of The Empire Strikes Back, and to commemorate that, Hasbro is relaunching the Vintage Collection of modern figures with vintage-styled card backs. 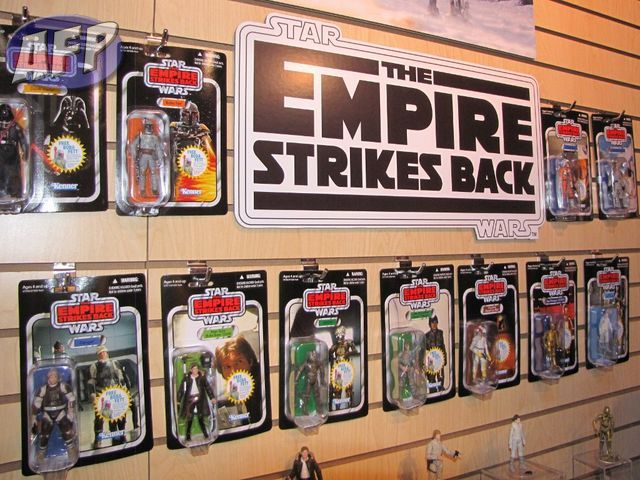 These figures will have a suggested retail price of $7.99, and unlike the previous incarnation that produced 6 figures based on the original Star Wars trilogy, this line will not be limited – it will run for at least two years and will pull from characters across all six Star Wars movies. In 2010, Hasbro plans 37 figures in 4 waves, with a new wave every 6 weeks or so. Twenty-seven of those figures will have either completely new tooling or partially new tooling with new paint deco, and 10 will be greatest hits figures appearing on vintage cards for the first time.

The Vintage Collection will kick off in August, with an Empire Strikes Back wave. 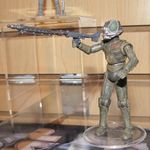 Hasbro will run a figure mail-in program featuring the “holy grail” of Star Wars figures – Boba Fett with firing rocket. This was a mail-in figure nearly 30 years ago, but for safety reasons, the firing rocket was withheld, and people who sent in for the figure got a regular Boba Fett instead. This time around you’ll need 5 proofs of purchase from packages with marked with Boba Fett stickers. He’ll come on a vintage card with white mailer box, and will feature a long rocket for safety reasons, and a short rocket for display.

The second wave of figures will be themed based on Episode 3, the Revenge of the Sith.

For vehicles, in August we’ll get the first wave, a Snow Speeder and a Cloud Car. The design team added lots of pop out weapons to the cloud car to make it more action oriented. It will also split into two separate pieces.

Hasbro waited until the end of their presentation to make its big reveal – an electronic AT-AT that completely dwarfs the previous release. 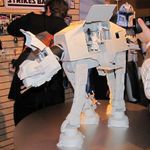 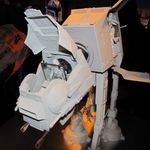 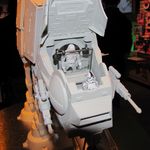 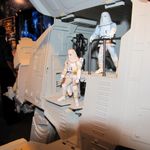 This monstrous vehicle features lights, sounds, and speech, and was engineered to come in at a suggested retail price of $99. The AT-AT will also have a packaging variant with vintage-styled packaging, so hardcore collectors, be on the lookout. Wow!
While the Vintage Collection was certainly a big part of the Star Wars update, the other lines in the brand also had new developments. Starting in August, Hasbro will introduce a new blue and black line look with a “Shadow of the Dark Side” theme.

They will also introduce the Galactic Battle Card Game – a new pack in across all figures and vehicles aside from Vintage. The game features a card that slides into the base for the toy. Players roll a die to determine what power to use. In play-testing, kids really liked that there was a clear winner and loser – no more arguments over who got who.

Clone Wars, which is the hottest line in the Star Wars brand, will get 31 new basic figures in 2010, most of them in the fall.

Clone Wars will feature more vehicles and battle packs too.

And the biggie in Clone Wars – a remote-controlled Hailfire Droid, with 18 projectiles, tank steering, and a Clone Trooper!

But that’s not all! Here’s a summary of the rest of the Star Wars update: 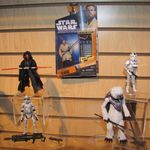 Whew. Only Transformers left to go – that will probably go up in a couple of days.