A: Actually having space to display them! 😀

A couple of days ago, I was lamenting having to move all of the action figures I had, not because we were moving, but because we had decided to install new carpeting. A few of them were on display in a small bookshelf that was mostly filled with books, and the balance were stored in big plastic tubs that I used to call “Staging Area One.” The carpet went in earlier this week, and I’ve been spending the last couple of days setting up the new display.

We got rid of the old bookshelf and added more shelving cubes. In all, there are forty-nine 1-foot square cubes, and I’ve got figures in thirty-one of them, and extra figures and customizing supplies in fourteen more. I’d guess I’ve got at least five times more display space than I used to.

Here’s a few of my favorite cubes.

On the left side are a set of customs I put together for a CustomCon of the Astonishing X-Men in their civilian clothes. My wife put Beast’s glasses on a twist tie so they wouldn’t get lost, but they fit his nose unassisted. Have to remember to put those on him. On the right are production figures of AXM from Toy Biz and Hasbro, with a custom Cyclops from the Unstoppable arc, the last of the most excellent Whedon and Cassaday run.

I hadn’t originally planned to have these out, but I one of the benefits of having to move everything is getting to see everything I had packed away. These figures from Art Asylum are really excellent, so I was glad to have space to display them. They really nailed all the likenesses except maybe Kirk’s, but Diamond Select Toys has a new set that includes an updated, much better Kirk sculpt (and a short-sleeved McCoy, Janice Rand, and Nurse Chapel!) due to come out any day now. These are several years old, but if you’ve got a hankering for TOS, DST has reissued them all in 2-packs. No Chekov, but Uhura’s in there.

My DC Universe Classics Legion of Doom got an upgrade with the new Lex Luthor from the Gotham City 5 set that’s exclusive to Wal-Mart right now. I got him with the help of the good folks at Critical Mess. Now that I’ve had the chance to look at Braniac again, I am seeing the color mismatch between his torso and arms more pronounced, so I might have to get a replacement. Only Cheetah, Riddler (in spandex) and Toyman to go. Toyman might take a while, because he’s currently losing the DC Universe Classics Fan Poll to Raven. C’mon! Vote for Toyman!

I hadn’t planned on doing a Spidey display, but when I found all the villains that we’d gotten over the years I couldn’t resist. I really like how this just came together, with everyone ready to pounce Spidey. Vulture is balanced precariously on an old Toy Biz flight stand, and Dock Ock is supported by his tentacles. I know that as soon as it gets a little hot in there, the whole thing will come tumbling down. The Vermin figure is a custom that I got from Dirty Dog Designs at the Fwoosh dinner during the last New York Comic-Con. I realize now that I don’t have Venom, Electro, or pointy chews Tarantula in there, but I have no idea how I could get them to fit.  Green Goblin is in my Marvel villains cube, since he’s basically the bad guy for the whole Marvel U during Dark Reign. 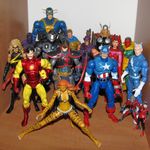 The tough thing is that I’ve still got a whole mountain of figures that didn’t make it into the display.  And then there’s the pile of MOC figures that I still have to go through.   Should be fun!

And link to your collections by leaving a comment!