This past Christmas, I got this guy – the World War Robot portable Day Watch Armstrong from 3A Toys – as a surprise gift: 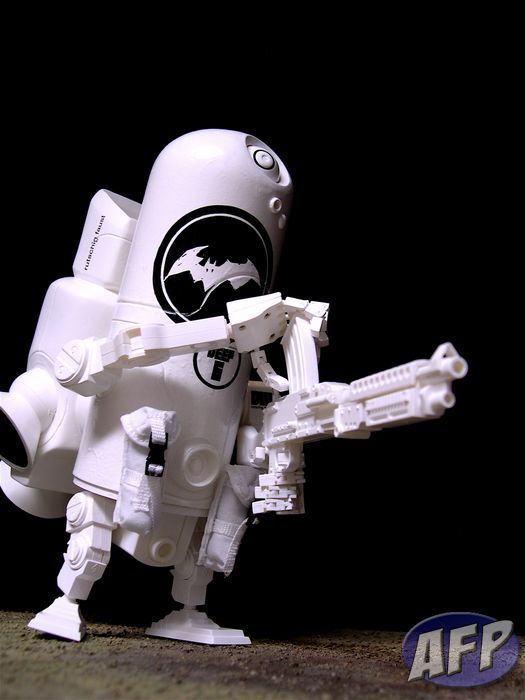 After a couple of hours, I was looking around online, finding out as much as I can about ThreeA’s World War Robots. I have always liked the way these toys looked, especially the weathered paint apps on other variations, but I’ve always thought that they were way too pricey for me. Now that I have one on-hand, I can see now how people who collect this line can’t get enough. 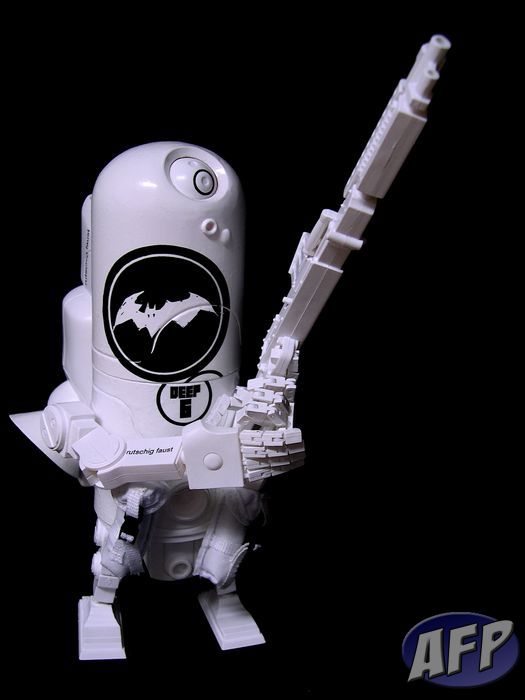 The Day Watch Armstrong 1G is part of a 3-pack with a Night Watch and Marine JEA Armstrongs, sold by ThreeA through their Bambaland Store website last year.

For the uninitiated (like me), World War Robot a simple story, a war between Earth and Martians (humans who migrated to Mars), with an inventor named Rothchild (who lives on the moon) selling war robots to both sides. You have different variations or “colorways” of different ‘bots, depending on who they work for – different countries, interest groups, military groups, etc. Add the fact that you have the different models of robots like Berties, Brambles, Martins and Drop Cloths, then you have a good selection of war robots to collect. ThreeA’s started making humans too, like the awesome Nom de Plume. The figures are fully articulated and the craftmanship (sculpt and paint-wise) is top-notch. It really is a great mix of designer toy and action figure collecting.

WWR comes in two scales: the regular WWR line, which is in 12-inch scale and the WWRp, which is the portable (and more affordable), 6-inch scale line. 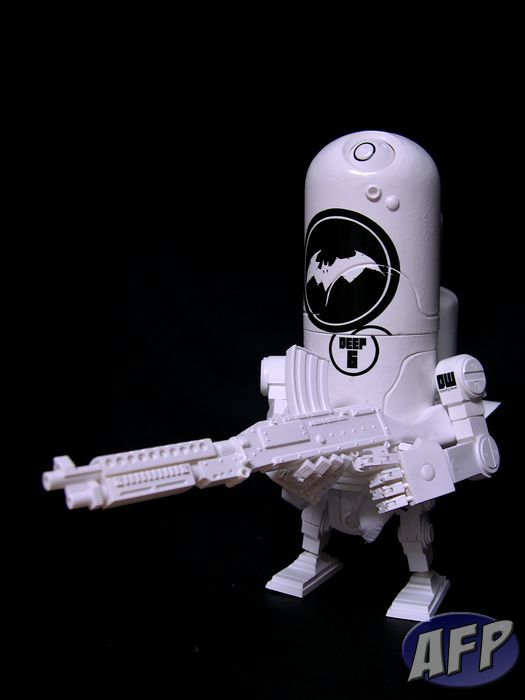 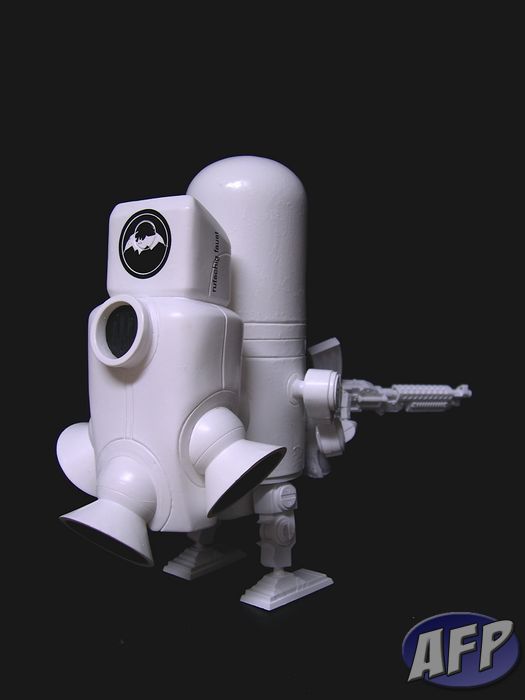 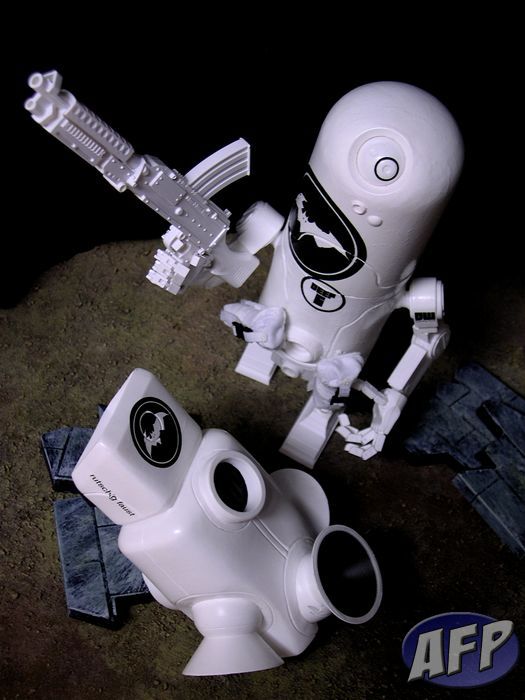 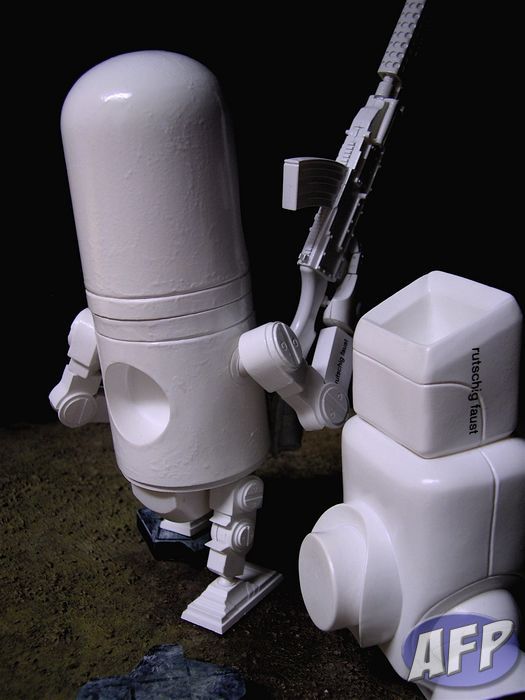 The Day Watch paint scheme is really as simple as they can get. Just plain white all over with some Day Watch logos all over the figure. I haven’t read anything about this group in the WWR universe, there’s speculation that they’re part of Rothchild’s Lunar group. He has the words “rutschig faust” painted on his arm and jet pack, I googled them and what I came up was “Slippery Magician” or “Slippery Fist”. I thought at first it would be German for Rothchild the Magician or something.

The clean look is a nice contrast to the gritty, weathered look most of the figures in this line have. I still want one (or more) of those weathered bots though!

I’ve read somewhere that these figures are also individually hand-painted, that’s quite impressive, especially for the weathered ones. 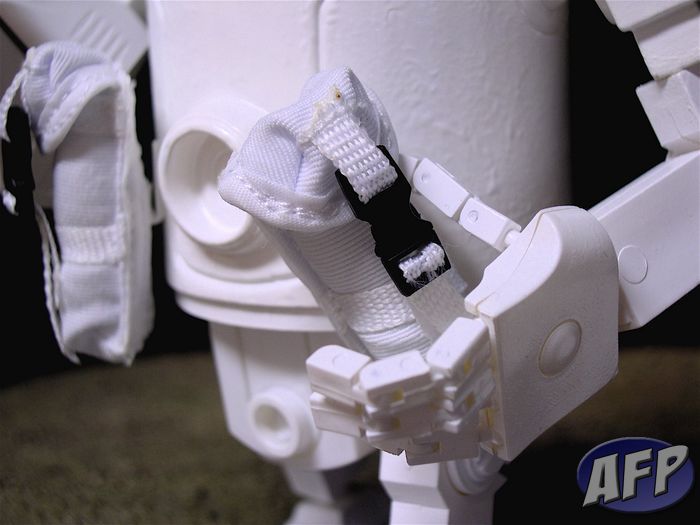 His pouches are made of real cloth and they are removable. Also, look at that nicely articulated robot hand! 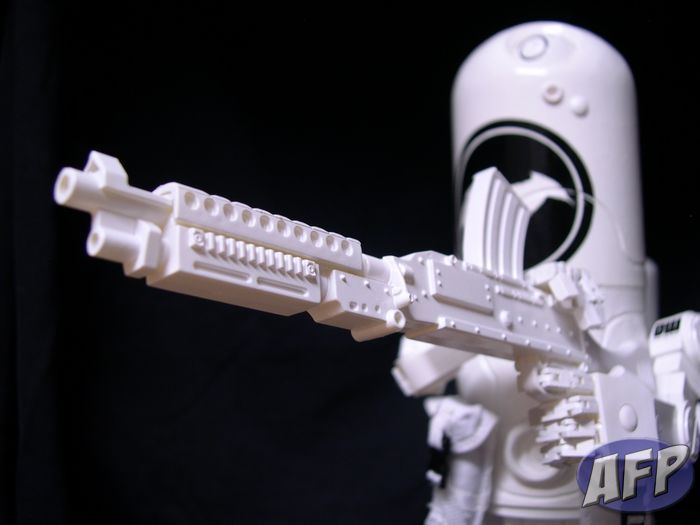 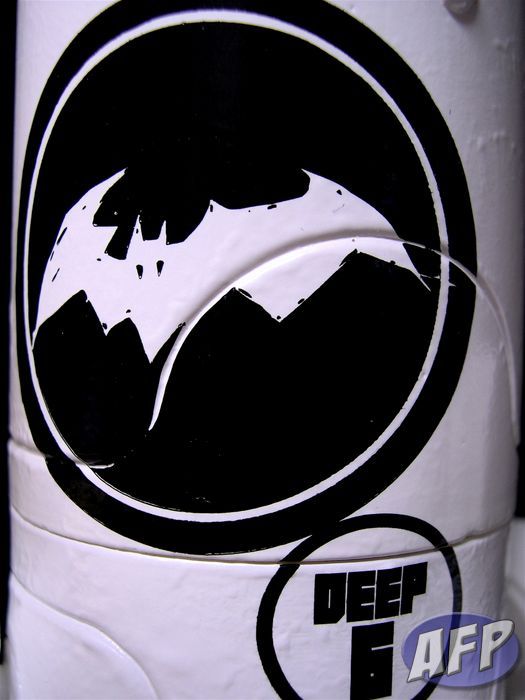 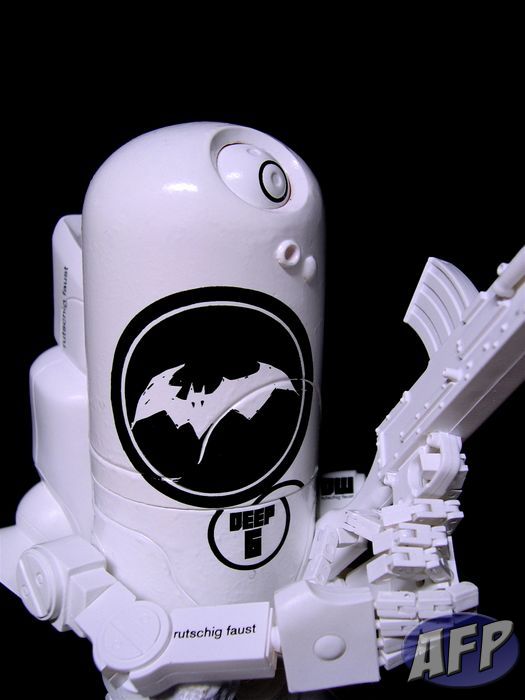 The articulated hands are one of the highlights of this figure for me. The finger articulation is just out of this world! The base of the fingers are on tiny ball joints so you can spread the fingers apart! Awesome! 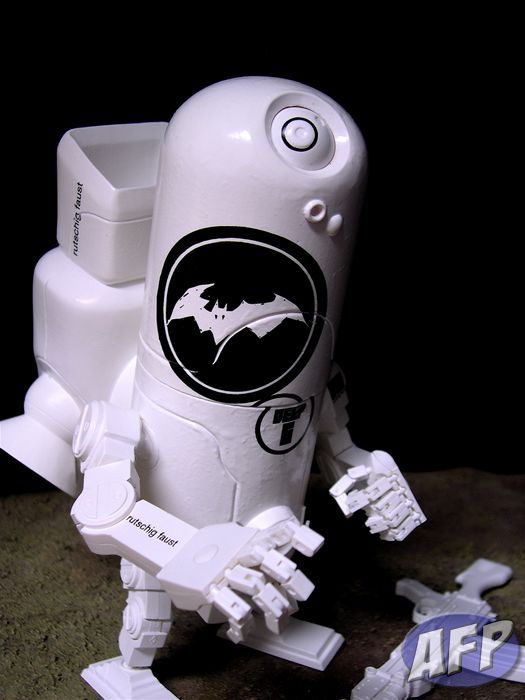 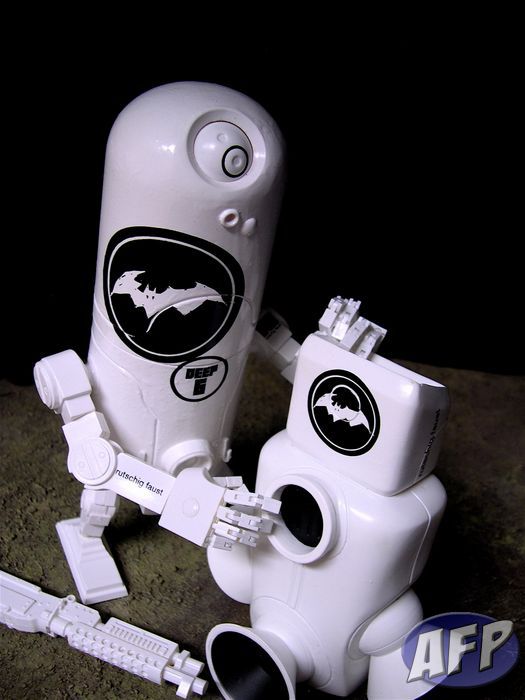 They call this Armstrong model 1g, which is meant for Earth travel, thus the large boosters on his removable jet pack. The 0g version has smaller jets. 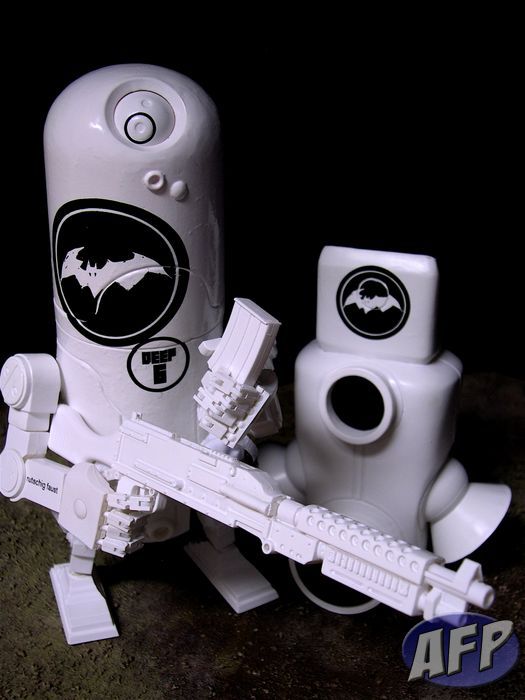 His articulation all around is great, with ball-jointed shoulders, wrist, hips and ankles. He’s got swivel biceps and head, and hinge elbows and knees. The boosters on his jet pack are on ball joints so they move around too. The joints are mostly tight, some too tight (especially where the paint seeps in), it takes a while to get used to moving them. 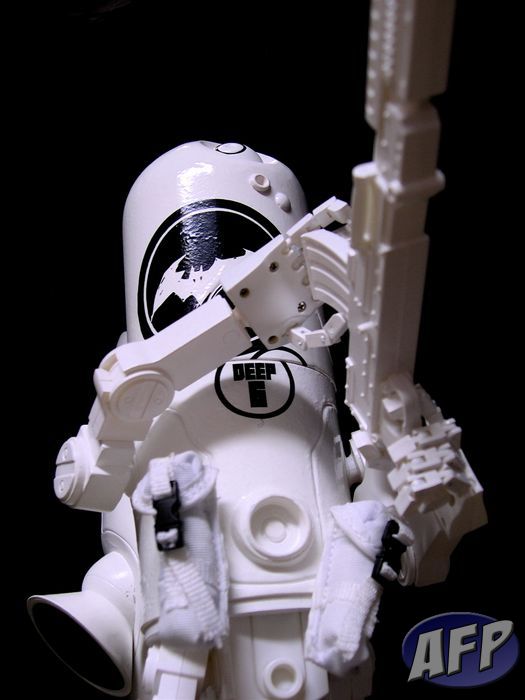 I’ve seen online that most of the other robot models also come in this Day Watch colorway, so it would be nice to see a gang of them all together! 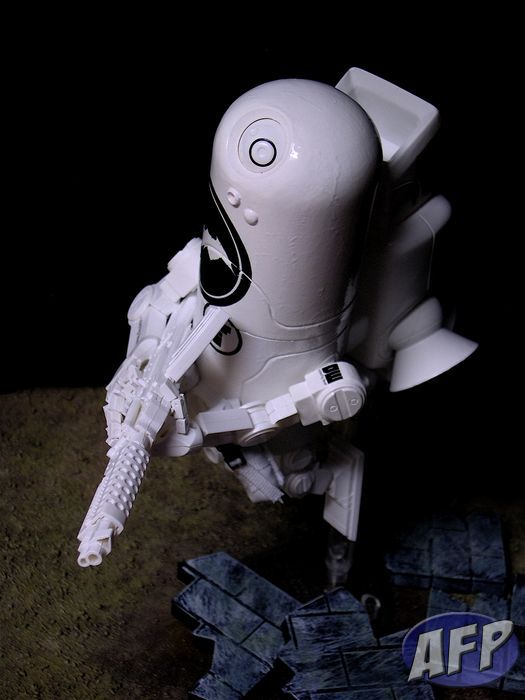 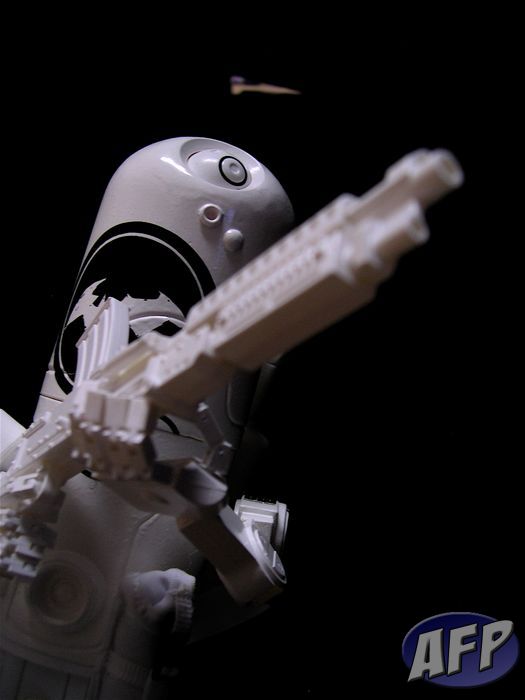 It’s easy to think an action figure like this would be very delicate, but I’ve dropped him twice, from the table to the floor, during this photoshoot and he thankfully didn’t break. 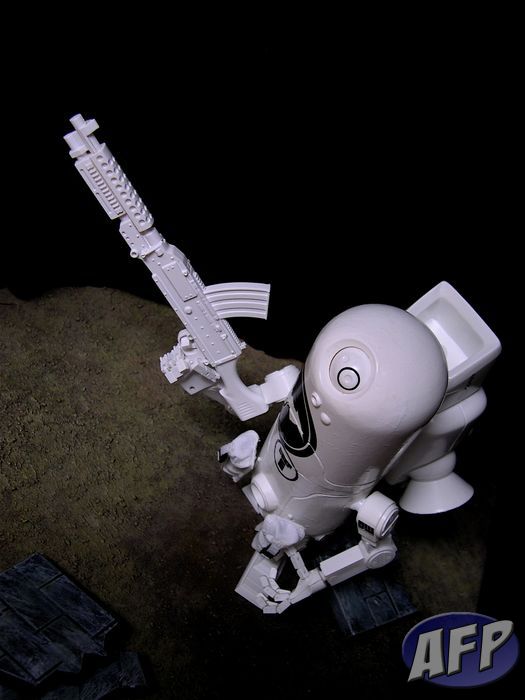 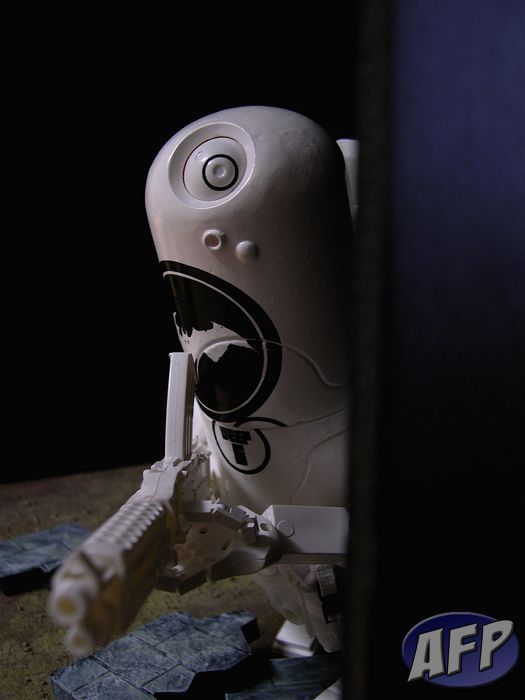 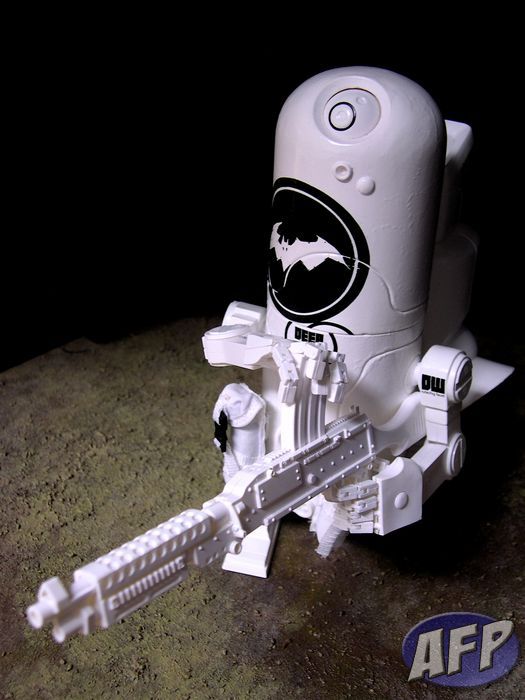 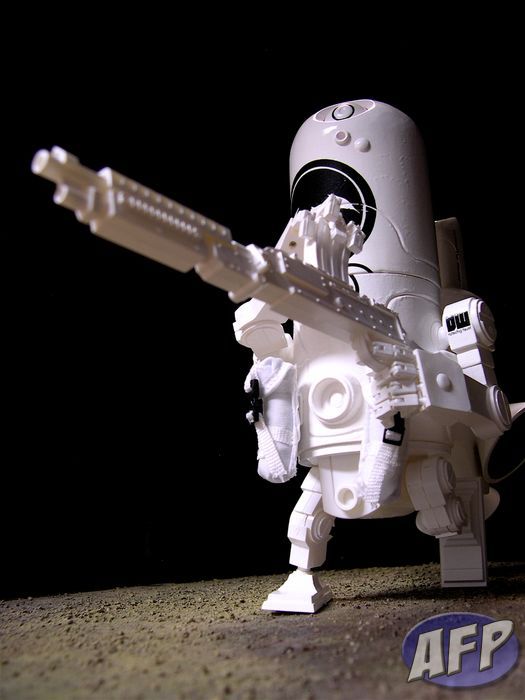 Collecting this line doesn’t seem easy though, with the limited runs and limited online drops (release/pre-order times). If you go to the Bambaland Store site right now, you won’t find any available, unless it’s a drop day. There are some retailers carrying retail exclusives, and there’s also Ebay.

The creator/designer, Ashley Woods, seems to have a fun time releasing the drops and adding secret drops all through the release time frame. I do like how he runs the line though, hard as it may look to acquire these guys, he does make it fun and exciting, and kinda rewarding. (This is all from observation though, firsthand, I’ve never actually ordered from Bambaland Store – yet!) And he doesn’t seem to skimp on the quality of the figures.

Listen to me, I only have one of these guys and I’m already gushing.

I really can’t wait to get my hands on other Armstrong colorways, as well as Berties, Brambles and the different guises of Nom de Plume. I realize they are quite pricey, so I most likely won’t be buying a whole lot, right now I’m pretty much going for a couple of each.

If you’re a fan of designer toys and love action figures, I highly recommend at least pickin’ any one of the WWRp’s up.

Slowly slidin’ down the slippery slope of World War Robots… 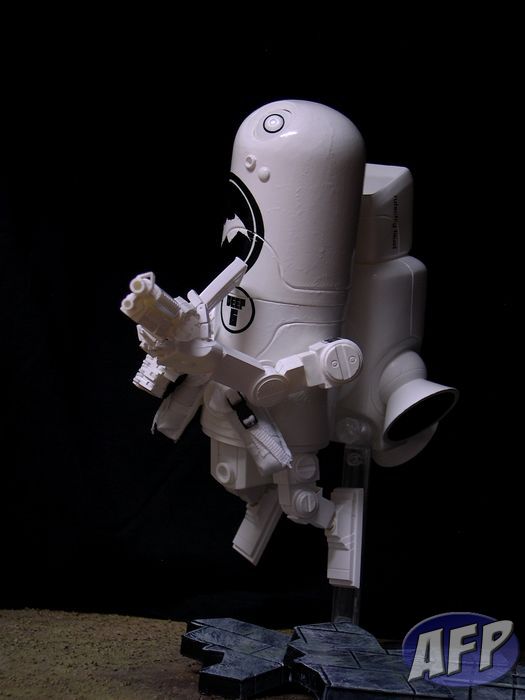