Moldie’s got a lot to say about 3A and the Ankous, so I’ll keep the intro short. He’s done a bunch of guest reviews for us (see here, here, here, here, and here) – you think it’s time for him to become a regular on AFP?

Toy collecting is growing up. Those of us who grew up with the old Star Wars figures of the 70s and 80s and G.I. JOE and Transformers, a lot of us were sucked back in with well designed and heavily-articulated toylines like Marvel Legends, now largely considered a pivotal series in the history of action figures. All the while the whole concept of comics and pop culture as contemporary art has grown and infected the same generation, leading toys to become more and more about legitimate aesthetic and overall design and less about character recognition and franchise promotion, the toy world’s crust slowly cracked open exposing opportunities for new and diverse lines.

It’s no surprise that a company like threeA might shine under these circumstances. With the production of toy lines the likes of WWR (World War Robot, 1/6, twelve-inch scale) and WWRp (World War Robot: portable, 1/12, six-inch scale) which are promoting nothing except an artist (Ashley Wood)’s sense of aesthetic, toy collecting seems to be veering into a whole new direction of high-quality collectibles, and leaving, to some degree, the toy aisles to the kiddos.

But threeA’s not just about rendering grimy, diesel-swilling robots in vinyl. Not just about gas masks and one-sleeved renegade soldiers, nope. It turns out it’s also about an old-school classic adventure team with a contemporary, crusty twist. With a touch of “emo” for the whiney-kid set.

We’re talking Adventure Kartel, here – the details of which are fed slowly, tiny morsel by tiny morsel as new figures are released into the wild.

The first release in the series was the Boiler Zomb, a stylish zombie in a boiler suit and Doc Martens. Next came the “emo of adventure” himself, Tommy Mission (in multiple versions ranging from the “normal version” with dirty skinny jeans, t-shirt and filthy hoodie to “Dirty Tracky” version in a black jumpsuit with a cruddy white stripe up both sides, to the “Shadow” version from an exclusive four-pack box set with all characters in relative monochrome). Tommy was followed by his on-again-off-again gal pal, Little Shadow (who came in a few different versions herself, from her “normal version” matching her boy Tommy, to her “Cherry Shadow” version in a cute plaid mini and cherry-red hair among others).

The most recent Adventure Kartel offering to land on collector’s doorsteps have been the Ankous – clampy-handed, part-man-part-robot (though nobody can say how much of either) zombie stompers.

The Ankous were offered for sale back in mid-July of last year in a number of different ways. You could purchase a set of three which would guarantee you one of each of the shown (at the time) Ankous; the Shadow Guard (black suit), the NCLS (orange suit), and the Newandria Police (blue suit). Alternately, you could purchase as many “blind boxes” as you wanted, which would throw in the possibility that you could land a “chase” or rare “variant” (“Asclepius Ankou” being medic themed in design, and an “unknown” version in a dark orange suit with the word “why?” stenciled on the front”). Also offered at the time was a boxed set of two figures, an NCLS Commander Ankou (in yellow suit with an orange arm) and a Zomb (for some reason the extra syllable of “ie” is generally dismissed within the Adventure Kartel universe) Two with a new zombie headsculpt and a white boiler suit.

I bought a three-pack, the two-pack and a blind (which ended up being another standard NCLS, so i haven’t bothered to take him out yet).

The articulation is standard for threeA’s twelve-inch scale human figures, which echos Hot Toys’ standard base figures (and threeA’s six-inch figures, such as the Noir de Plume as well). You’ve got double-jointed elbows and knees, ball-jointed neck and wrists and ankles to a degree (the movement is slightly hindered by the stiff boots collars). The chest and waist are articulated in what you might call a “slide joint” or something; the parts are held together by a peg with a spring offering slight compression allowing the pieces to slide aganst each other but retain tension. It’s not “new” articulation – I just don’t know what else to call it. The Ankous have hinged clampy-hands while the Zomb’s are sculpted – they’re generally the same hand sculpt that’s been used for the original Zomb and Tommy Mission. All of the bodies are painted to match their exposed parts, which is a nice touch if you ever decide to change their costumes around for “dress-up time,” I reckon. 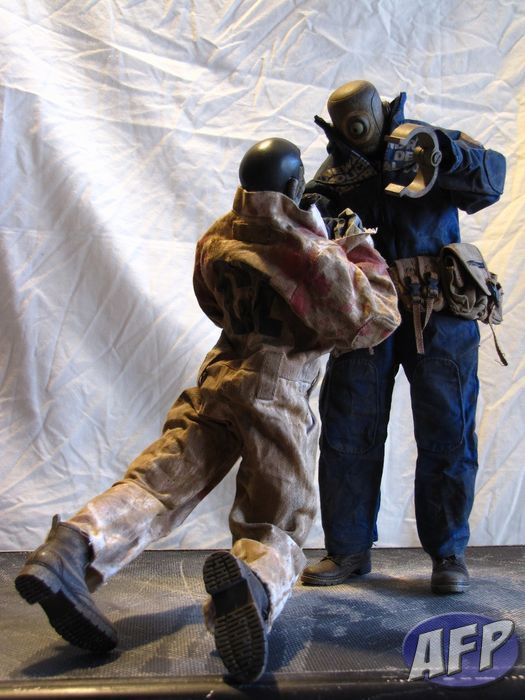 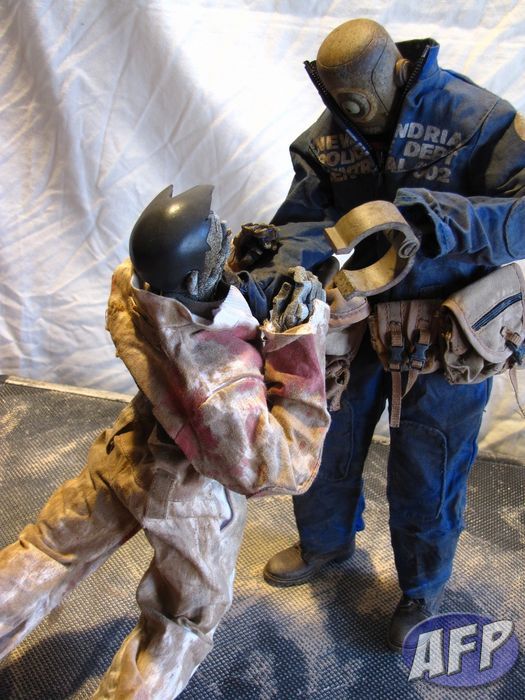 One of my favorite aspect of any threeA offering generally tends to be the realistic decay of the paint applications and these follow the trend. The robot heads are all adequately weathered and the boiler suits are wrinkly and worn. I like the idea of the Zomb’s boiler suit being blood-stained, but the color is WAY too pink for my tastes and I may need to ruddy it up a bit myself.

All in all, I can’t say I’m disappointed in these figures, though I personally am a bit underwhelmed. I won’t blame the company for that, I had SOME idea what I was getting into when I ordered them, though there are always unknowns with threeA; you’ll rarely have a finished version of a product to see at the time of ordering. It just turns out that I like the Shadow Guard more than I like any of the other versions, and I’d have liked the opportunity to buy more of THAT version than having to purchase either blind boxes and risk not getting ANY, or buying multiple sets and then trying to dump off my extras when they came in. But that’s a common trend within “art toy collectibles” too – blind boxing and trading. It’s just that this is a damn expensive series of toys to be doing that sort of thing with.

But I DID end up with a diverse collection, and that’s not a horrible thing. The overall aesthetic of the Adventure Kartel line is pretty ass-kicking. Boiler suits rock, after all.

But personally, I can’t wait to get my personal Adventure Kartel saviour, Fighting J.C., in hand. 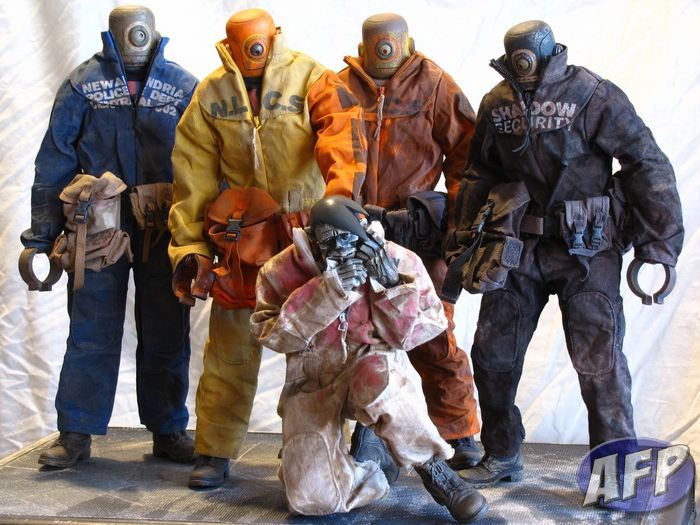