For a month with the regular Club Eternia figure pushed out by a month (October will have Lord Dactus and Mantenna doubled up), it still feels like there’s a lot to buy. That’s because the Jet Sled vehicle, potentially the front half to a Battle Ram, is on sale with a pilot called Sky High. The Jet Sled and pilot cost $50, raising the question of why include another random figure. Sure, there were palace guards that rode the Jet Sleds during the original cartoon, but things really got exciting when Teela, Man-at-Arms, or He-Man jumped on one to go chase some Evil Warriors. I think Mattel missed out on a potential army builder vehicle here.

On the DC front,we’re coming down to the wire on Club Infinite Earths and Watchmen with Huntress and the Comedian. I’m still a little shocked that I’m going from three subs this year down to none in 2014, since I’ve decided to cherry-pick Masters of the Universe Classics (when Mattel offers day of sale) and DC was canceled.

Early Access starts Thursday at 8AM PST and will run for a day. Kudos to Mattel – even though their announcement makes no mention of it, the Jet Sled will be available, joining DCUC Poison Ivy and MOTUC Stratos. For convenience, here’s the link to Early Access. The regular sale starts on Monday at 9AM PST. 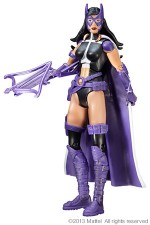 Fans have had her in their sights for a long, long time, and she’s finally here! This month the Huntress is ready to take aim against injustice when she and her crossbow arrive for Club Infinite Earths, along with Batros™, Sky High with Jet Sled™, The Comedian and more! Get all the details…