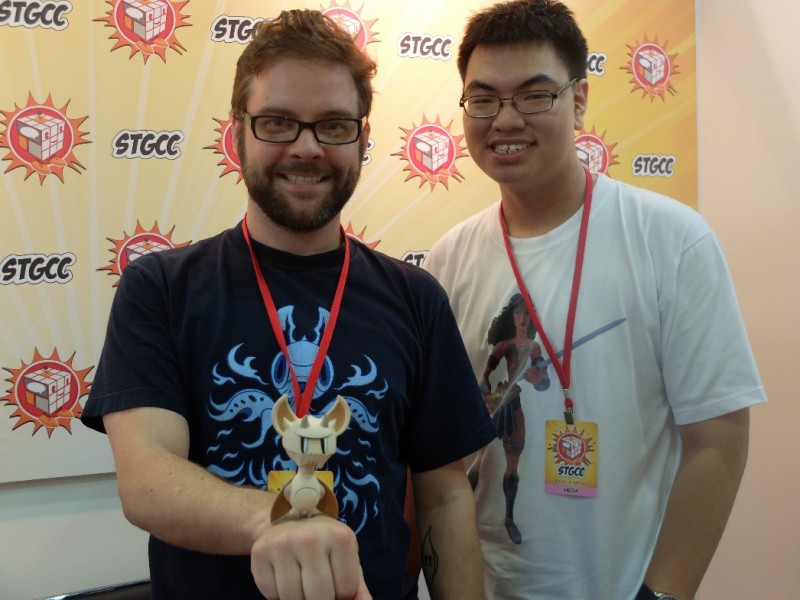 Here’s a wrap-up of Jedd’s STGCC coverage with an interview with Nathan Hamill, artist and toy designer, who coincidentally is one of Mark Hamill’s kids. He talks with Jedd about toys, art, comics, and, yes, a little bit about Star Wars.

Are you having a good time so far?

I had a look at your Twitter feed, really cool stuff. Beneath your handle, it says “I makes what I likes.” What do you think has been the most rewarding thing of living by that maxim? 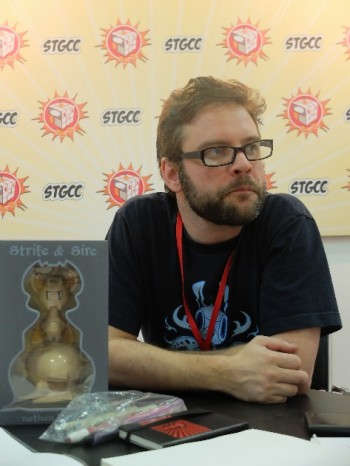 So, inevitable question: was Star Wars a big part of your childhood and did the early Kenner toys inspire you to pursue toy design?

Well, that’s the thing, it took… when I finally figured out that I wanted to do this, I kind of thought “Why hadn’t I thought of this earlier?” It was a marriage of two things I’ve always loved: I’ve always drawn as a kid and always collected toys, so why not combine the two? My Dad jokes that my first word was “Kenner.” Not true, just a joke.

Was there a lot of “I’m feeling a little bit mad at Dad so I’m gonna take it out vicariously on Bespin Luke” here?

Not that I remember, you know, but maybe a few chew marks.

So you’ve worked with Bongo Comics; do you feel more of an affinity with The Simpsons or Futurama?

Simpsons. I mean it’s been around longer, it’s just… I grew up on The Simpsons. Futurama came later, I still like Futurama but The Simpsons are… can’t top that.

Oh, to draw… I would be the Life in Hell character, the one-eared rabbit Bongo. Other than that, probably Homer.

Oh, actually I’m a colorist so I don’t draw them, I draw them for fun but… I knew that before working there, because I was just so obsessed with the Simpsons like… I started working for Bongo; I was the go-to guy for questions. They go, “We need uh, JFK” and I go “Season 4, Duffless” And they would go “Okay!” and they would go get the model sheets, so… I’m like the Rain Man of Simpsons.

Nice, “Rain Man of Simpsons.” If you could do a project involving a comics superhero/villain, one of those Marvel or DC characters, who would you like to put your spin on?

Nice. Have you seen what they’ve to him in the New 52?

They made him skinny, sensitive Lobo. 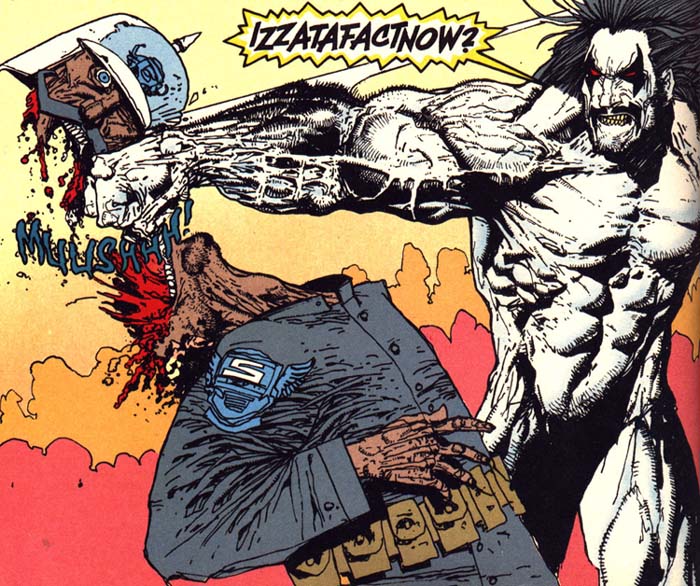 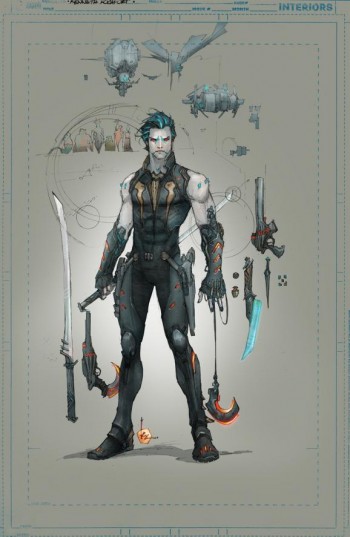 I was talking to the Army of Snipers the other day and J*RYU had some very interesting things to say about the label “designer toys.” So what do you think about the line between a toy and a piece of art, and what do you view your creations as?

Um… that’s a good question. We were talking about that last night and whether like “designer toy” maybe makes it seem… too stuffy, maybe something you’d find at like an architecture show… you yeah, I don’t… that’s a tough one. I almost… that one I might leave up in the air because I love to say… talking about art is like dancing about architecture. There’s a certain point where you kinda just leave it… leave it up to other peoples’ interpretation. Yeah I guess I’ll refer you back to “I makes what I likes” and just keep it… that’s an ongoing question, that’s a question that I’ll have an answer to maybe next year, if I’m invited back.

Sure, I look forward to it! Did you do customization when you were starting out; did you take existing toys and modify them? 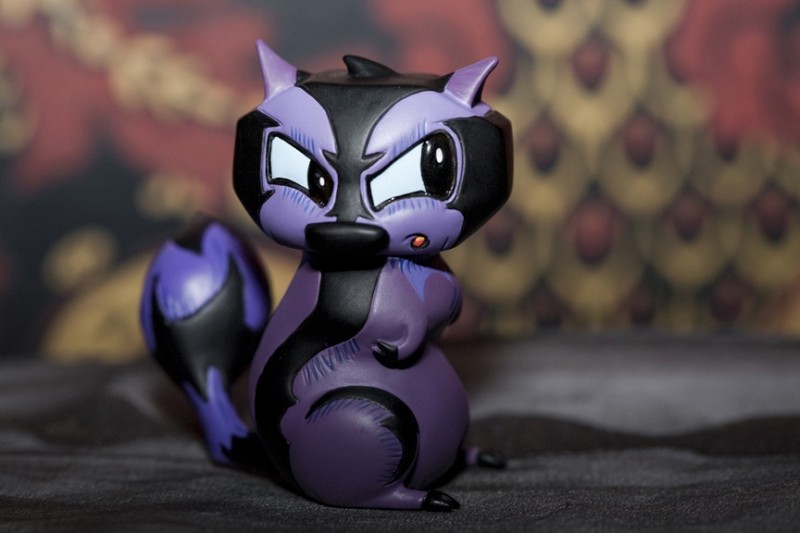 Yeah… I mean it was actually… I sorta did it in an odd way which is I started customizing Boris, the first toy that I did. So we released the toy and had like 50 artists customize it. I think it was about 50, so um yeah, I customize from time to time.

What’s your view on the big commercial toy scene, the Mattels and the Hasbros?

I think there’s… I collect lots of different types of toys, I think there can be a little bit of a… snobbery involved in toy collecting, where people will look down on you if you buy this or that or the other… and it’s like “if the quality is there.” For example there was a… Toma did a Godzilla toy in… it was in Toys ‘R Us and it was mass produced but it was very well-made. It was a really high-quality toy, and just because it was in Toys ‘R Us and it was sold for $18 vs. if the exact same toy was sold for $60, people would snap it off the shelves and they wouldn’t look down on it… it all has to do with quality. So… as Kozac said, “make multiple.” If you can make more and the quality’s there, I feel like that’s good.

J*RYU said that he preferred the term “commoditized art pieces” to “designer toys”, and he was talking about how the guy who did Dunny? I think his son was saying “Dad, my friends would like to have one of your monsters” and he was like “these are art pieces, these are $150 each” and when he was manufacturing it, people could have a hold of one for $10.

Is that Tristan Eaton and the Dunny?

I think it was Ryniak.

They were limited edition ones?

I think it was a partnership they did with like Urban Outfitters… that the toys would be available at those stores.

At KidRobot through Chris Ryniak? Not even stuffy and no… listen. J*RYU… when he was on Toy Break, he was so insightful; he knew a lot of stuff. I like to play around with it, I say like at the end of the day, they’re just words. But it’s good to have a dialogue, so I just… I’ll say “that J*RYU’s a snob!” Just kidding.

(Laughs) This is going to be the headline.

The headline on the tabloid that I write for (laughs). I think you’ve been asked this a lot, but what was your experience like hanging around on the sets of the Star Wars films? In Episode I you had your cameo and before that…

Well before that… well, I was so young that it was just a vague memory… like I kind of remember tall trees and little bears… you know… 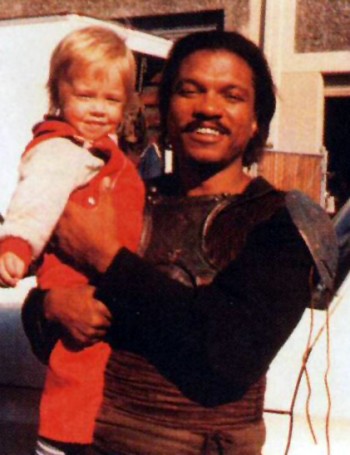 (Laughs) That should be the tagline for Episode VI. “Tall trees and little bears”.

So for those I was… I mean I was probably two, two and half when they were shooting the third one (Return of the Jedi), you know, so… I don’t… I wasn’t making memories yet. And for Episode I, yeah, that was very cool to go over there and see the sets… it’s just… there’s a certain smell you get when you’re on a physical set, it’s a lot of fun. But the first one I just have photos, I don’t have first-hand knowledge of that, so…

Can I ask how you feel about Hasbro’s Black Series? Now they’ve finally done Star Wars figures in six inch scale and everyone is going nuts and is like “Ahh, why didn’t you do this 20 years ago?!”

The Boba Fett is like… not only one of the best… it’s coming out in Series 2. Boba Fett is where the focus is; Han Solo is an okay sculpt… it’s great, I have that and the Artoo one and they’re fantastic. It’s gotten me collecting them again, so… I’d stopped for a while.

Is there a particular piece of your collection that holds a certain sentimental value for you, something that was hard to find or hard to get…

Oh, that’s a good… let me think about that… yeah, it’s not a toy, there’s an Empire Strikes Back tote bag, it’s like a mini bowling bag thing that was something I got to… something George Lucas gave me when I was (little)… I carried all my figures in it.

Like a carrying case… so cool. Do you have any insight, any views on Number 7?

I can tell you but as the saying goes, I’ll have to kill you (laughs). I… yeah, I don’t know much, and what I know I can’t say.

Are you excited for it?

Thank you very much, I think I’m about done and it was great talking to you!

I unintentionally posted this late – thanks to Nathan Hamill for his time, and thanks again to Jedd for bringing us another insightful and entertaining interview from STGCC. Till next year!