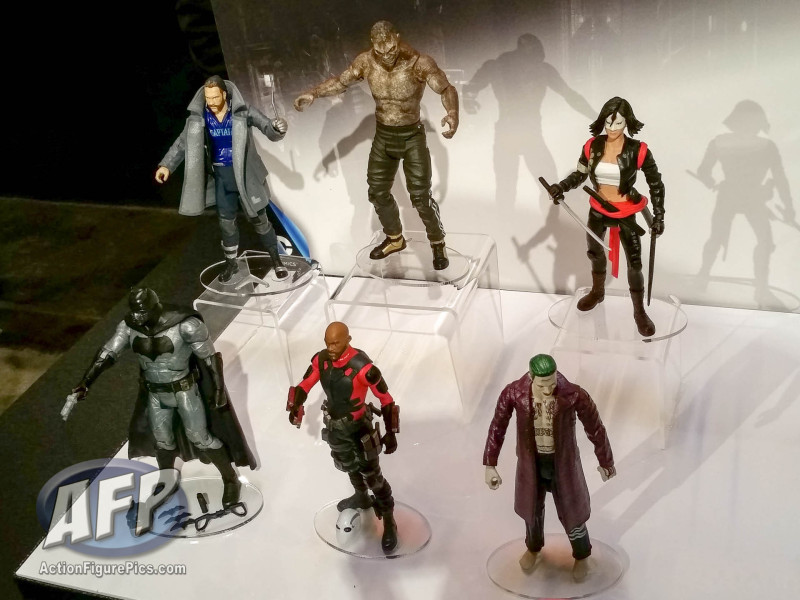 Some new additions to the Multiverse line here: Superman infected by Doomsday DNA, TV Supergirl, armored Batman and the Mutant Leader from The Dark Knight Returns comic, movie Lex Luthor in prison garb (if that’s a spoiler, blame Mattel, not me!), and a New 52 Doomsday.

I didn’t get to ask, but I’m guessing Doomsday is a Collect and Connect figure for the next Multiverse wave.

Mattel unveiled Suicide Squad figures for the first time, in both 12- and 6-inch scale. At 12-inches, the Joker and Deathstroke were shown. In 6-inches, we were shown Boomerang, Killer Croc, Katana, Batman, Deadshot, and Joker. This leaves Harley Quinn, Rick Flag, El Diablo, Enchantress, and Amanda Waller on Mattel’s cutting room floor or in a future assortment.

I asked if the Four Horsemen did any work on these figures – the answer is no. The likenesses for Jai Courtney and Will Smith are pretty good, but Jared Leto’s Joker doesn’t really strike me as him. Batman looks to be built off of the BvS Bats – and continues to look pretty abysmal despite the addition of a new gas mask alternate head and a bunch of accessories.