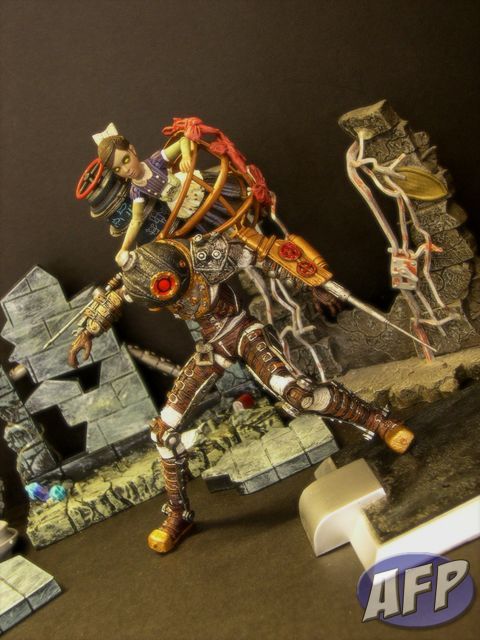 With the upcoming release of BioShock 2 this Tuesday, February 9th, let’s have a look at NECA’s BioShock 2: Big Sister and Little Sister 2-pack. Now I have to admit I never played the first game (I plan to though!), so I have no idea what BioShock’s story is, but when I saw these at my local Toys R’ Us, I couldn’t resist and I decided to pick this set up. The character designs just look too awesome to ignore! I was also curious about the articulation and I was hoping they weren’t going to be statues. I loved what NECA had done with Street Fighter and Ninja Gaiden’s Ryu Hayabusa in regards to articulation, and I was hoping they did the same to these figures.

END_OF_DOCUMENT_TOKEN_TO_BE_REPLACED

We first saw the new Bio Shock figures at San Diego Comic-Con, where my friend Industrial went gaga over them.  He never played the game, but I’m betting he’ll be buying these.  He’s also trying to get me hooked on World War Robot and the new 1/12 scale figures from 3A Toys, but so far I’m resisting!

BioShock returns with a new game and new figures! 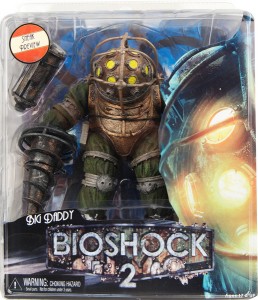 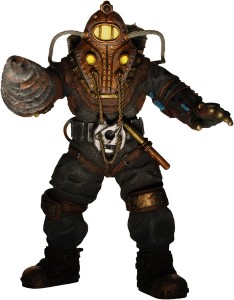 It’s 1970, 10 years after the original BioShock. We’re back in BioShock 2 in the dystopian underwater city of Rapture, but now it’s controlled by Sophia Lamb, whose message of collective conscious is spread by a priest-turned-cult-leader. Additionally, to maintain order in the city, Lamb has created an army of Big Daddy-like enforcers called Big Sisters and sent them to abduct little girls from towns on the Atlantic Coast and bring them back to Rapture to create new Little Sisters.

Suddenly, the prototype Big Daddy from the original production line reactivates with no recollection of what’s happened in the past 10 years. After scouring the city in a vain attempt to find the Little Sister he was originally paired with, he realizes Sophia Lamb’s evil plan and seeks to overthrow Lamb and her army of Big Sisters.

BioShock 2 doesn’t release until next year, but NECA has already begun celebrating the sequel to the original 2K Games smash with a sneak preview deluxe figure of the Big Daddy Bouncer, which is in stores now! Our BioShock 2 line officially kicks off in January with the Series 1 assortment:

Subject Delta (formerly the Big Daddy player) is highly detailed and over 7″ tall, has removable hoses and backpack tanks, an interchangeable drill arm, and ball joints at the shoulders, elbows, wrists, waist, hips, knees and ankles. 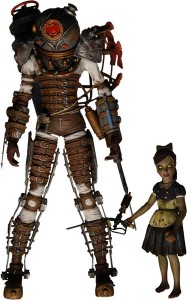 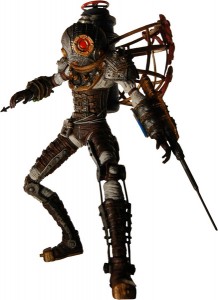 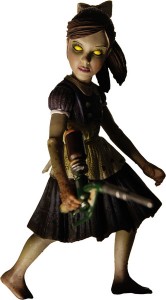 Big Sister is of similarly massive 7″-plus proportion and detail. She has a removable backpack with a cage basket just the right size for capturing a Little Sister and ball joints at the neck, shoulders, elbows, wrists, hips, knees ankles and ab crunch.

Finally, Little Sister has an ADAM syringe and ball jointed neck and shoulders, hinged elbows and knees and a v-crotch. And yes, she does actually fit in Big Sister’s basket.

There will be a Toys R Us exclusive two-pack with Big Sister and Little Sister packaged together, and even more BioShock 2 announcements to follow, including details on the EVE Hypo light-up replica and the Big Daddy plush doll, as seen on the Xbox Live Marketplace and in the BioShock 2 ad campaign!

Of course, keep it tuned to necaonline.com and our Amazon storefront

for more on BioShock 2 and other lines from your favorite games and movies.

I had to beg, borrow, and steal to get these lazy mofos (me included) to write something up, but here’s what some of the crackjack staff members at the Fwoosh (me included)  had to say about what we saw coming out of San Diego Comic-Con. 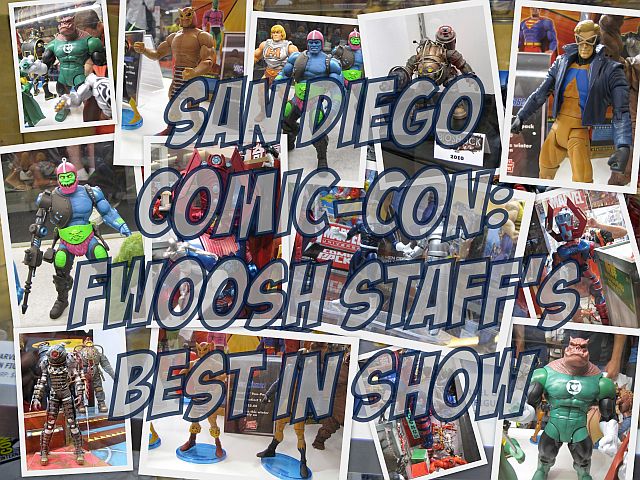 At last, because no one demanded it and because the show’s been over for a month already, here’s the San Diego Comic-Con Best in Show review, by your friendly neighborhood Fwoosh staff.

Visiting the NECA booth last week at San Diego Comic-Con, I was disappointed to not see more Teenage Mutant Ninja Turtles, and not until after the show did I find out why. I am not familiar with many of NECA’s licensed video game properties. Sure, I know Street Fighter, but my gaming in my old age is limited to NHL games. Still, there’s lots to appreciate here just from an action figure fan perspective.

Bio Shock – Industrial from TheFwoosh.com really dug these – he hasn’t played the game either.