A couple of months back, we posted a guest review from MatthewK of the World War Robot Portable Winter Bramble. Matt and some other friends had been telling me about this great line of vinyl toys from Ashley Wood, and I knew it was a matter of time before I’d cave in. Problem was, by the time that happened, the Brambles were only available on the secondary market, going for 3 times the original retail price or higher.

So when I was pointed to an online store where the going price was only double what I would have paid if I had only listened to reason back then, I decided to jump on the bandwagon and picked up two Brambles, the Euro and the Merc.

END_OF_DOCUMENT_TOKEN_TO_BE_REPLACED

BattleGrip has a great overview of the WWRP Bertie 7-pack – be sure to check it out for some amazing pictures. I’m really looking forward to their upcoming reviews of the individual Berties. 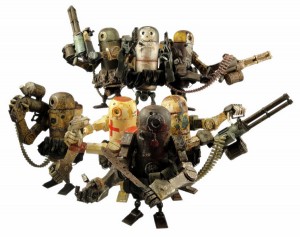 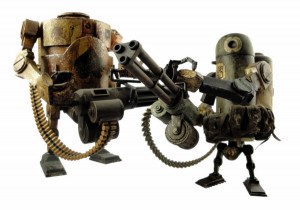 It is time! After snapping hundreds of photos, spending several hours playing with the Berties, and generally finding myself extremely happy with these robot toys, I’m ready to dive into the World War Robot Bertie 7 Pack (mentioned here) master review.

After a lot of torture (aka reading the Fwoosh forum thread about 3A Toys and World War Robot) I’ve jumped in with a WWRP pre-order. And since there’s really no telling when those will actually ship, I’ve submitted to more torture (aka looking at pictures of other people’s 3A collections).

It’s such a beautiful day here that Gina and I took the dogs for a walk to the park . . . and I immediately turned us around so that I could grab robots and the camera. I love when the water’s high around the park because it lets me take some fun shots of toys in nature. 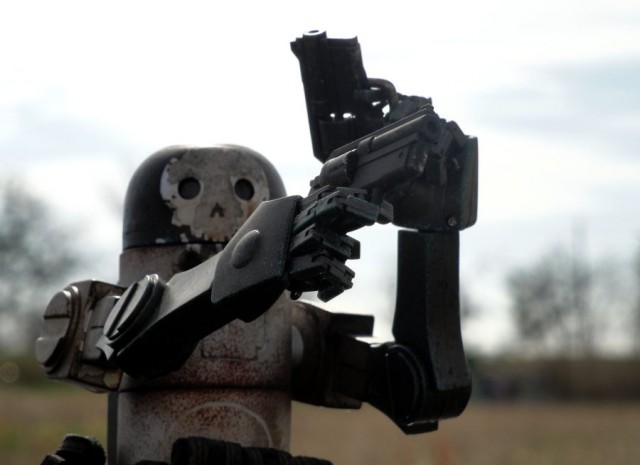 I’m getting closer to launching the series of World War Robot* Bertie reviews. Many photos have been shot, the review headers for the master entry and all seven Berties are complete, and once I get all of the Squares set I’ll begin writing. It looks like this will be a series of nine reviews . . . there are a lot of robots in this box.

This is a guest review by Fwoosher MatthewK. This review was first published on the Fwoosh E-Zine.

The World War Robot Portable (WWRP) is a series of vinyl action figures based on the artwork of Ashley Wood. The original WWR figures were 1/6th scale figures (12inch), but this new WWRP line has robots shrunk down to the 1/12 scale familiar to fans of Marvel Legends and DC Universe Classics. I just picked up my first Bramble Frosty (The model name of the robot is Bramble and mine is painted in the ‘winter’ colorway with the nickname ‘Frosty’) from sponsor Big Bad Toy Store.

END_OF_DOCUMENT_TOKEN_TO_BE_REPLACED

Fans of ThreeA Toys and World War Robot, act fast – the latest releases in the WWRP 1/12 scale (the P is for portable) have just been made available for pre-order at Sideshow. I missed the boat on the Brambles and have been trying to find one for a reasonable price on eBay. So far no luck. 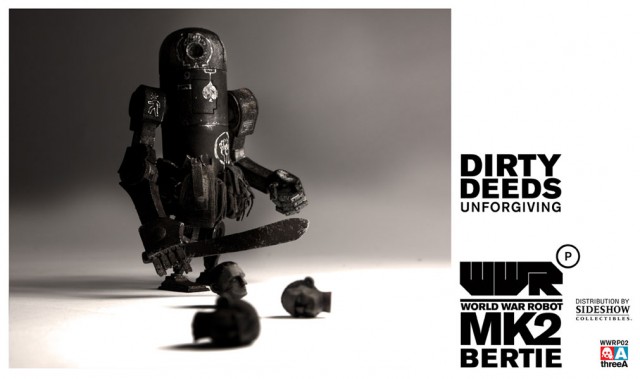