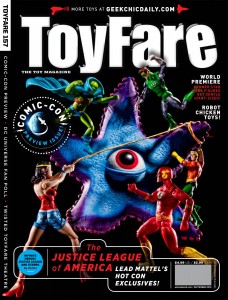 Are you ready for quite possibly the awesomest issue of ToyFare this year? Of course you are! Okay, new question…are you ready for next week’s geek High Holy Days: San Diego Comic-Con? Whether you’re on your way to sunny California or you’re going to be watching from the sidelines, ToyFare #157 (featuring two of the Con’s hottest exclusives—Galactus by Hasbro and JLA Vs. Starro by Mattel—on the covers) has all you need to get prepped for the show or to feel like you’re there! We’ve got pre-show reveals, amazing interviews, plus all the booth numbers and panel schedules you need to make this issue a toy geek’s guide to the con!

One thought on “ToyFare 157 On Sale Today”