Icon Heroes has sent us info on two exclusives for SDCC 2014. It’s too bad Masters of the Universe Classics doesn’t have a 12-inch female figure, as the previous Icon Heroes Swords of Power letter openers work great with Tytus and Megator.

Hello we are pleased to announce 2 exciting exclusives for San Diego Comic Con, both to be sold at the Action Figure Xpress booth #3345!

First we have the She-Ra Filmation Sword of Protection Letter Opener.  Wield the power of a princess in your hands with the Masters of the Universe™ She-Ra™ Power Sword™ Letter Opener by Icon Heroes. Complete with gem, this sword of protection approximately measures 7”H x 1.4”W x .3”D and weighs 3 oz. Made of sturdy zinc alloy metal, this Masters of the Universe™ She-Ra™ Power Sword™ Letter Opener is a great addition for any She-Ra® fan. Fully compatible with the He-Man™ and other Masters of the Universe™ line of Power Sword™ letter openers. The massive bone base measures approximately 16.5″L x 13.5″W x 4.4″H.  $20.00 and limited to just 1,000 pieces worldwide.  Attendees may preorder and pick up at the show at http://www.shopafx.com/7-93573-70075-9-pup.html.

Last is the Star Trek The Original Series Yellow Logo Bookends Set.  Secure your favorite books or DVDs on your journey into space: the final frontier with these stylish Star Trek Logo Bookends by Icon Heroes. Together the two ends measure approximately 6.5” H x 7.25” W x 4” D and weigh approximately 6 pounds. Made of sturdy poly stone, each piece is meticulously hand painted. Easily recognizable, these Logo Bookends are sure to be a great addition to any Star Trek collection.  $80.00 and limited to just 150 sets worldwide.  Attendees may preorder and pick up at the show at http://www.shopafx.com/7-93573-70081-0-pup.html. 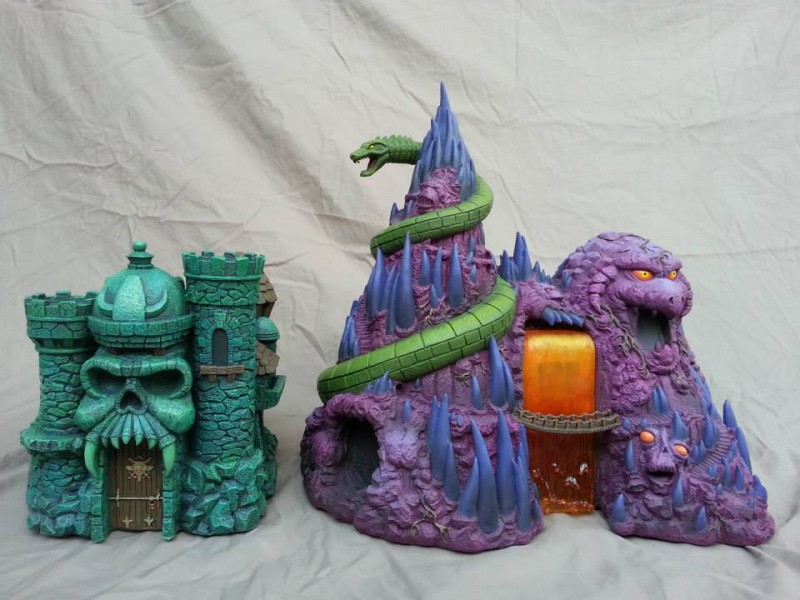 As much as fans are enjoying their Masters of the Universe Classics Castle Grayskull playsets from Mattel, it’s unlikely that they will produce a companion Snake Mountain. That’s where Icon Heroes comes in – they created a Snake Mountain as a polystone statue. While not in scale with MOTUC, it could still serve as a backdrop or just a unique item for your collection. And of course, Icon Heroes also made Castle Grayskull plus an awesome accessory kit.

The Icon Heroes Snake Mountain will sell for $299.99 and ship in 4Q this year.

END_OF_DOCUMENT_TOKEN_TO_BE_REPLACED

I have always been a huge fan of the Thundercats. Sure I had most of the Masters of the Universe and I picked up G.I. Joe a little late around 1988, but Thundercats was my show. Alas, after two seasons and a hundred and fricken thirty episodes, the series ended and the property has languished in the shadows since, save for a very short-lived reboot in 2011. While the reboot produced a decent cast of action figures, they did not have the charm of the barely articulated behemoths of the 80s. Not one set of glowing eyes among them sadly. 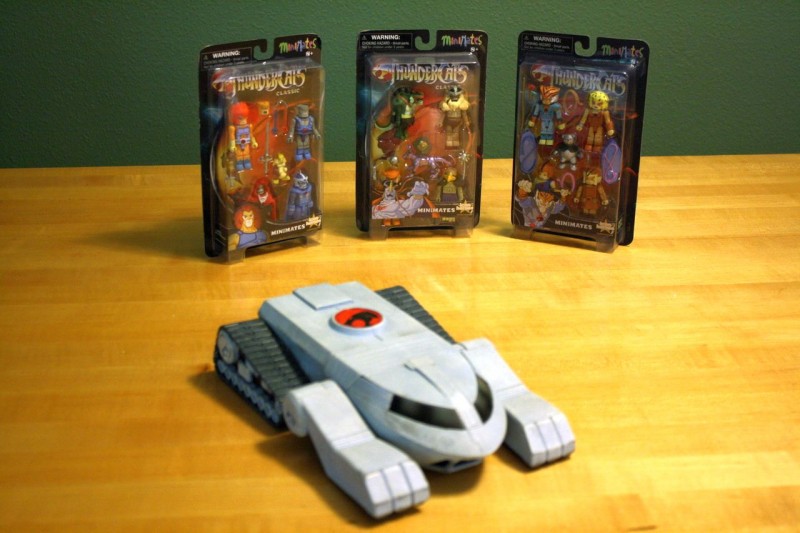 Fortunately, Icon Heroes has been releasing Minimates of the classic Thundercats at Comic Con for the last few years. Ron was nice enough to pick some up for me, although now I suspect he was angling for me to write an article for AFP. I nearly foiled his plot by simply hanging them on the wall, unopened, but then something magnificent happened: they released a Minimates-scale THUNDERTANK! How could I not buy that? How long could I resist opening it and driving it around my living room?

END_OF_DOCUMENT_TOKEN_TO_BE_REPLACED

Icon Heroes has revealed its exclusives for San Diego Comic-Con. I’m glad to see the ThunderCats Minimates continue. For more information on the He-Man bust, check out our conversation with Joe Amaro, who collaborated with the Four Horsemen on that piece. And remember, those Power Swords are compatible with the larger figures in the Masters of the Universe Classics line, like Tytus and Megator.

All three exclusives will be available at the Action Figure Xpress Booth #3345. 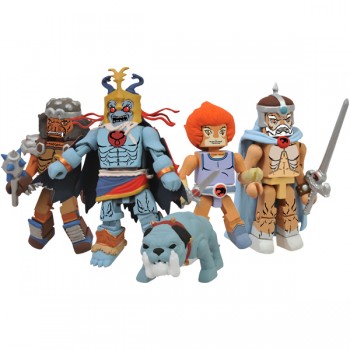 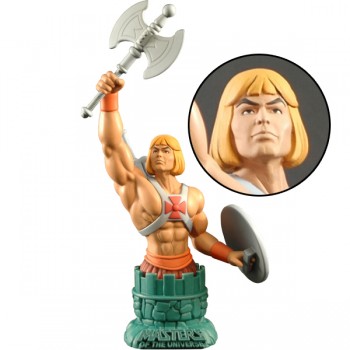 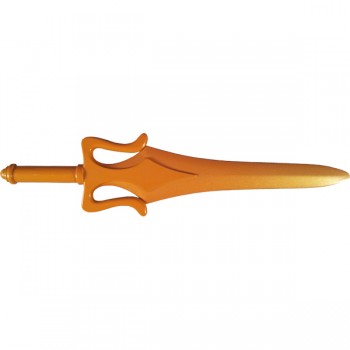 As his homeworld crumbled around him, young Prince Lion-O fled Thundera with the noble Jaga. Jaga would sacrifice himself to ensure his ward reached the safety of Third Earth, but little did he know the dangers the boy would face, most notably his old foe Grune the Destroyer and a new threat, Mumm-Ra the Ever-Living.  Includes a Ma-Mutt PVC Minimate!  Limited edition of 3,000.

Keep your papers safe from Eternian winds with the Icon Heroes San Diego Comic Con Exclusive Masters of the Universe He-Man Mini Bust Paperweight! Based on the 1980’s Filmation television series, He-Man wields his battle axe and shield atop a Castle Grayskull tower base defying evil. Designed and sculpted by Joe Amaro and the Four Horsemen, this complete piece comes with sheath and Master of the Universe logo. Cast in high quality polystone, the He-Man Mini Bust Paperweight stands approximately 10 inches tall from the bottom of the base to the tip of the axe. This makes a great addition to any desktop or Masters of the Universe collection.  Limited edition of 500 (ONLY 100 AVAILABLE AT SAN DIEGO COMIC-CON).

Icon Heroes has really been on a tear in recent days. Their Castle Grayskull Polystone Environment is coming out this month, and they’ve just announced another Masters of the Universe item – the He-Man Mini-Bust Paperweight.

Keep your papers safe from Eternian winds with the Icon Heroes Masters of the Universe He-Man Mini Bust Paperweight! Based on the 1980’s Filmation television series, He-Man wields his power sword atop a Castle Grayskull tower base defying evil. Designed and sculpted by Joe Amaro and the Four Horsemen, this complete piece comes with sheath and Master of the Universe logo. Cast in high quality polystone, the He-Man Mini Bust Paperweight stands approximately 12 inches tall from the bottom of the base to the tip of the Power Sword. This makes a great addition to any desktop or Masters of the Universe collection. Available September 2013. SRP $60.

We were lucky enough to chat with Nate Baersch, designer of the Icon Heroes Castle Grayskull a couple days ago, and it’s a special treat for us to chat today with Joe Amaro, who designed and sculpted this mini-bust in collaboration with the Four Horsemen. Joe is noted in the collectibles community for his MOTU-inspired creations, like his Manta Raider collaboration with Rudy Obrero. His professional credentials include a stint at Jazwares. Joe was gracious enough to answer our questions about the mini-bust and some of his other projects.