END_OF_DOCUMENT_TOKEN_TO_BE_REPLACED

We’ll be stopping by Entertainment Earth to check out the Venture Bros. figures. I know there are folks that were hoping for more traditional action figures – I’m one of them. But I do want to see how the figures turned out in production, because the Mego style really does fit the show.

Bif Bang Pow! is set to conquer Comic-Con International: San Diego 2010 with a powerful barrage of brand-new collectibles that includes 13 SDCC Exclusives and nine action figure product debuts from The Venture Bros., Lost, The Twilight Zone, and Dexter… plus the first-ever bobble head from Eastbound & Down®. Fans can also meet and get their figures signed by The Venture Bros.’ creators Jackson Publick and Doc Hammer on Saturday, July 24, 2010 from 4:30 pm until 6:00 pm (subject to change).

All products will be available only at the Entertainment Earth® booth #2343. Prices include sales tax, and per-person limits may apply at the show.

The Twilight Zone Travel through another dimension with this unbelievable array of SDCC Exclusive bobble heads and retro-style action figures based on fan-favorite episodes of the iconic TV series. These wobblers, licensed from CBS Consumer Products, are made of resin and stand about 7-inches tall: 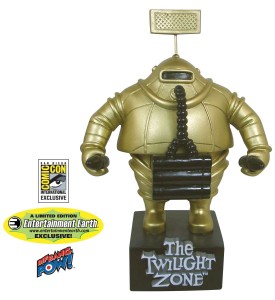 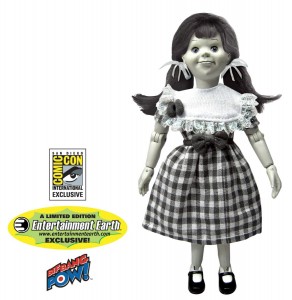 For the very first time, 8-inch scale action figures – all in black and white – are available for fans to take home! The 1970’s style SDCC Exclusive Talky Tina and Willie Action Figures present two of the most spine-chilling characters ever seen in The Twilight Zone. Fully articulated, these killer figures are made in conjunction with EMCE Toys in the 8- inch scale, but on the approximately 6-inch tall “child” body type with episode-true fabric clothing. Also making their debut at Comic-Con are the rest of the all-new The Twilight Zone 8-inch action figure series, including The Gremlin, Kanamit, Jason Foster, and The Devil. And they’re all just as creepy as the original characters! ($20 each) 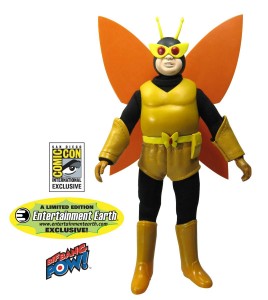 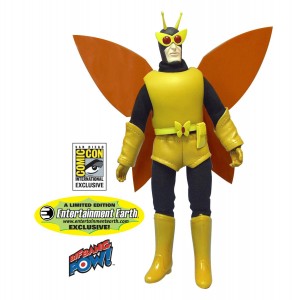 The Venture Bros. Fans can now own the first-ever line of action figures from Adult Swim’s The Venture Bros., created in conjunction with EMCE Toys, and get their figures signed by The Venture Bros.’ creators Jackson Publick and Doc Hammer at the show! Debuting at Comic-Con will be highly articulated, retro-style figures of Dr Venture, Brock Samson, The Monarch, and Dean Venture, as well as two SDCC Exclusives: Henchman Number 21 and Henchman Number 24. All six 8-inch figures bring sensational detail and authentic fabric clothing, and each captures that distinctive action- comedy mix that’s synonymous with the top-rated television series. ($20 each)

Eastbound & Down “I play real sports.” With more heat on it than a Kenny Powers fastball, this 7-inch talking bobble head of the has-been pitcher curses and speaks 5 unforgettable phrases taken from the HBO® hit comedy series Eastbound and Down®. It’s made of resin and features the Kenny Powers character in a baseball uniform. ($20) 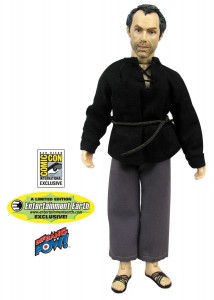 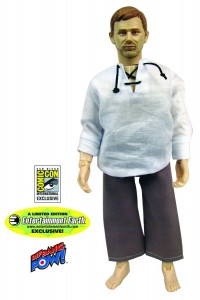 And don’t miss the champions of good and evil… Jacob and Man in Black Action Figures! Both are SDCC Exclusives crafted in retro, vintage-style sculpting with real fabric clothing. Standing on the EMCE Toys 8-inch scale action figure body with multiple points of articulation, the mysterious Jacob and his equally enigmatic nemesis, the Man in Black, are here to keep the memory of The Island alive. ($20 each) 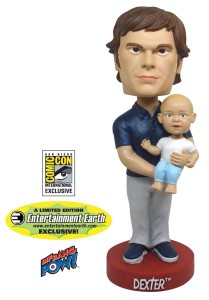 Dexter Since 2008, Showtime Network’s Emmy-nominated drama series Dexter admirers have flocked to pick up our fantastic exclusives at Comic-Con. Not shying away from our responsibilities, we’ve upped the ante this year to bring fans two all-new items that are sure to become instant hits. Dexter – and his son Harrison – make their way to Comic-Con in resin form in our cute Dexter and Harrison Double-Bobbling Bobble Head SDCC Exclusive. The blood-spatter expert and so-called “good guy” holds little baby Harrison… and both of their heads bobble! They’re available in this 7-inch wobbler for the first time ever… only at Comic-Con. ($15)

Action figure fans won’t be left out either with the debut of our 7-inch Dexter in Jumpsuit. It features the part-time serial killer in cloth scrubs and cloth apron, and comes with a handsaw and welder’s mask with a flip-down visor. ($20)

“We promised last year that SDCC 2010 was going to be the biggest yet for Bif Bang Pow! and we’ve kept our word,” said Jason Lenzi, CEO of Bif Bang Pow! “Our fans have been so amazing the past few years at Comic Con that we wanted to give them all something special and a big toy-shaped hug. Returning favorites, product exclusives and debuts, and a brand- new license will all be in full swing at SDCC 2010. See you there!”

In a broad announcement yesterday, Bif Bang Pow! announced that it will be partnering with EMCE Toys to produce retro-styled action figures across its licenses, including the Venture Bros.  EMCE Toys makes licensed reproductions of the original Mego toys and packaging, and also creates new toys based on the style of toys in the ’70s and ’80s.  EMCE was cofounded by Paul “Dr. Mego” Clarke, and is also currently working with Mattel on their Retro-Action DC Super Heroes line.

For those keeping track, the first wave of the Venture Bros. line was revealed in an Adult Swim Bump – it will include Dr. Venture, Brock, the Monarch, Hank, and Dean.

I asked Jason Lenzi from Bif Bang Pow! if they plan to produce Venture Bros. figures in other styles, and he said that it will depend on the support the line gets.  The concept as discussed with Venture Bros. creator Jackson Publick at San Diego Comic-Con last year was for figures with a “retro” vibe, as that would fit best with the show.  But they’re keeping their options open.  Lenzi says, “we’ve got the license for a long time, and fully plan on exploring all scales of action figures. Including vehicles! Stay tuned!!”

We should have plenty of pics of the prototypes when we hit up Toy Fair in a couple of weeks.

END_OF_DOCUMENT_TOKEN_TO_BE_REPLACED

I’d not heard of Bif Bang Pow! before.  They’ve got an interesting mix of licensed properties.

LOS ANGELES, CA (June 16, 2009) – Comic-Con International celebrates its 40th anniversary, and Bif Bang Pow!’s booming line of collectibles from Dexter™, The Big Lebowski™, and Flash Gordon™ explodes at Comic-Con International: San Diego 2009 with the unveiling of seven brand-new, limited edition, SDCC Exclusive action figures… plus bobble head product debuts from The Twilight Zone™ that add to the buzz. Available only at the Entertainment Earth® booth #2343. Prices include sales tax, and perperson limits may apply at the show.

“As Comic-Con International celebrates its 40th anniversary, Bif Bang Pow! is adding to the festivities by commemorating the 75th birthday of Flash Gordon™ and the 50th anniversary of The Twilight Zone™ with one-of-a-kind convention exclusives and first-look debuts based on these and other popular properties like Dexter™ and The Big Lebowski™,” said Jason Lenzi, CEO of Bif Bang Pow! “We’re proud to be a part of Comic-Con again this year and to make SDCC the venue for these electrifying new releases. Expect more of the unexpected from Bif Bang Pow!”