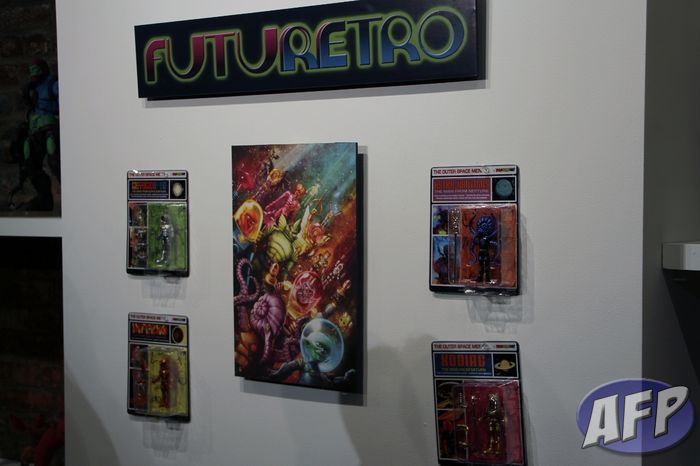 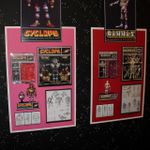 It was a love fest for Mel Birnkrant’s Outer Space Men, showing many vintage pieces, original art work, and how the Four Horsemen revamped it into their current offerings. Exclusive to the show and host gallery / toy store Toy Tokyo is a set of four modern Outer Space Men variants that were redesigned by Mel Birnkrant – I think the time space continuum just exploded.

One of the very cool features of the modern OSM line is compatibility with Onell Design’s Glyos system. The folks from Onell were present with a case full of Glyos goodness. 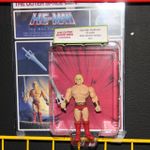 The combination of Outer Space Men and Glyos allows for countless variations and customizations, and this year’s show included a showcase of customized figures and artwork. Some of the items were for sale – and it was interesting to see the art gallery process in play here, with patrons picking out items and the Toy Tokyo staff noting selections down on a clipboard and marking sold items with red dots.

I had been hoping for more Fantastic Exclusive reveals and wasn’t disappointed. Gothitropolis’s Scarabus made a reappearance, as did the Raven that we’d seen previously (although I missed a shot of the white variant). They had a very cool set up of the Raven in a bird cage – but the show was so crowded that it kept getting jostled around – I hope it made it through the show.

What was totally unexpected were the Vampire queen 2-ups, complete with a whole slew of variants. For those of you who remember the Fantastic Exclusive voting from several years back – it looks like she just popped off those original drawings. Amazing! The variants pull from both Seventh Kingdom and Gothitropolis, with cats, a cow, and an alien present. The snake-headed variant seems like it should have been a lock for an Egyptian themed Scarabus variant last year. 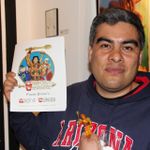 It’s always fun to bump into friends at these events. FANtastic Forum’s izdawiz and I argued over who traveled farther to attend the show – I still think he won, coming from Sacramento, California. Furthermore, I just brought a camera, while he had a coloring book and custom of Health-E-Man and the Champions of the Chewniverse, his collaboration with artist Frank Stone.

I got to the show an hour after opening, and it was packed. If time permits, I’ll head back there to get some more pics in a couple of days. Still – a great way to kick off Toy Fair. Huge thanks and congratulations to the Four Horsemen!