With Episode 9 due out in theaters in late December, it’s no wonder that Hasbro was holding back on showing off new figures in the Star Wars Black Series – we’ll be seeing a lot of movie figures as we approach shelf dates in the Fall. But that didn’t stop them from dropping a few surprises on us.

END_OF_DOCUMENT_TOKEN_TO_BE_REPLACED

The mood lighting at Hasbro’s ‘Twas the Night Before (New York Comic Con) party was great for getting us in a festive mood, but is hell on the smart phone I have convinced myself is better than lugging around a few pounds of camera gear. (How’d I do? Check out my own pics from the event.) But Hasbro planned ahead, sharing press pics of pretty much all the reveals from this evening’s soiree.

And of course, we’re sharing them with you. We’ve got the official pics from Marvel, Star Wars, Transformers, KRE-O, and the latest of the Angry Birds mash-ups – Angry Birds Transformers. Enjoy!

END_OF_DOCUMENT_TOKEN_TO_BE_REPLACED

Iron-Cow Prod. is pleased to showcase its new additions to the Vintage Kenner Star Wars action figure line! These figures are meant to fill in some gaps, expand the line a bit, and generally have some fun revisiting childhood nostalgia. When possible, I left any paint scrapes on the original figures intact for any intentional visual aging effect.

END_OF_DOCUMENT_TOKEN_TO_BE_REPLACED

I’ve been browsing looking for online deals today – pretty lazily, because with online shopping it’s not too hard to fill the gaps in the toy collection. But I did see some big price drops for wave 1 of the 6-inch Star Wars Black Series at Amazon. Now, I’ve already got the figures, but for those of you who have been holding off, now might be the time to get in. The figures are really great, and for $9.99 each, you can pretend you’re buying them a long time ago and far, far away – while the sting of George Lucas trashing your childhood with the prequels was still fresh!

The only exception, naturally, is the Sandtrooper – still a couple bucks off at $17.99, but people have been army building. 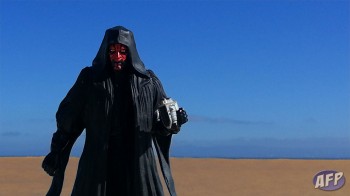 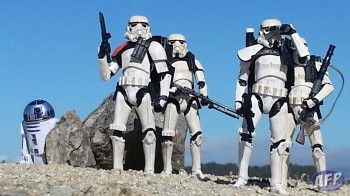 Several weeks ago, I snapped a picture on my desk at home for a quick Instagram shot – it featured some Sandtroopers searching for droids. I liked the idea so much that I resolved to recreate it “on location,” so to speak. But my neighborhood has got a lot of hills and trees. Just finding an unobstructed horizon with sky in the background is almost impossible without taking a drive. So I had scouted out where I might find some patches of dirt using Google Maps (thank you satellite view) and headed out there the next day. I had a dentist appointment first thing that morning, and I was a little rushed, so I grabbed my camera and my figures in a ziploc and headed out the door.

After my appointment, I drove to the location, which was a park / trail / dog park by the bay. The best spot I found was on top of a hill with the bay in the background, but it was so windy the Sandtroopers kept falling over. After much fiddling, I finally got a stable set up, and pulled out my camera – NO MEMORY CARD. Doh!

I snapped some pictures with my phone, but not really being able to see them that well on site, I discovered later that the bay was in most of them. So much for the illusion of a desert planet! The Darth Maul shot was a quick Photoshop job to make the bay look more like desert sand in the background. The Sandtrooper / R2 shot looks a little grainy, but somehow I think it makes it look more like a vintage shot.

And in case you missed it, Entertainment Earth has Star Wars Black Series wave 2 in stock with free shipping. Go get them!