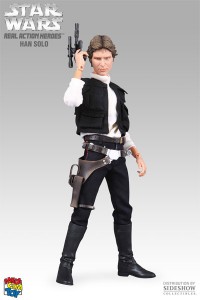 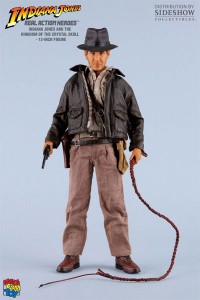 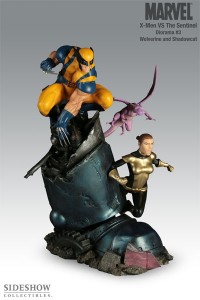 Sideshow Collectibles is having a one day sale today, with coupon codes for 35 or 50% on selected figures and statues. If you’re a Harrison Ford fan, then you’re in luck, because he shows up in both categories, with the Medicom RAH Han Solo for 35% off and Medicom RAH Indiana Jones (Crystal Skull) for 50% off.

They’ve also got some Hellboy, Marvel, and Predator items on the list, which will change throughout the day based on availability.

A: Actually having space to display them! 😀

A couple of days ago, I was lamenting having to move all of the action figures I had, not because we were moving, but because we had decided to install new carpeting. A few of them were on display in a small bookshelf that was mostly filled with books, and the balance were stored in big plastic tubs that I used to call “Staging Area One.” The carpet went in earlier this week, and I’ve been spending the last couple of days setting up the new display.

We got rid of the old bookshelf and added more shelving cubes. In all, there are forty-nine 1-foot square cubes, and I’ve got figures in thirty-one of them, and extra figures and customizing supplies in fourteen more. I’d guess I’ve got at least five times more display space than I used to.

END_OF_DOCUMENT_TOKEN_TO_BE_REPLACED

I am not a statue or bust collector, but Gentle Giant has lots of Star Wars, Harry Potter, and Indiana Jones items up for sale. For me, the gems of the sale are the Hellboy and Abe action figures from the animated movies. They come with lots of accessories, have great articulation, and at $8.50 each are a real steal.

They’ve also got a couple of Halo Kubrick items. I know some folks who go crazy over these, but they’re normally a little too pricey for me.

We are giving our collectors an early start on our month long Labor Day Sale. Save up to 50% off the regular retail prices on in stock selected items listed below. The sale prices are valid through September 30th, 2009 or while supplies last.

If you guys read my review of Mezco’s Comic Book Hellboy, you know what a kickass vinyl figure he is. Mezco has just announced a variant, featuring Hellboy in a black BPRD shirt.  Looks like this one also has a completely closed mouth instead of gritted teeth, and I’m starting to wonder if people will mix and match heads like they did when the first movie Hellboy figures with all the open and closed mouth variants came out.  We just need a variant open Right Hand of Doom to make the experience complete!

The original Comic Book Hellboy was available at San Diego Comic-Con and is backordered at Mezco Direct, but I haven’t found a listing for this guy yet. Will update when I do.

Mezco’s beloved Mez-Itz return in a larger six inch form. These newly resized creations are the hot new item in the world of designer vinyl for 2009. Based on the artwork of Mike Mignola, this limited edition Hellboy Mez-Itz captures the essence of the comic book Hellboy from his sawed-off horns to his posable tail. Standing six inches tall, with six points of articulation, this limited edition variant figures comes complete with Hellboy’s legendary gun, the Samaritan, and features the famous BPRD (Bureau Of Paranormal Research And Defense) logo on his shirt.

You know what?  I wanted to take some pictures of the Mezco Mez-Itz Comic Book Hellboy that’s exclusive to San Diego Comic-Con and their online store because I thought it would be a simple review.  After all, it’s a vinyl figure, right?  With vinyl, you plunk them down on a shelf, you dust them off once in a while, and that’s about it.

Not so with this guy.  As you’ll see, there’s more to this figure than you might be expecting.  I was certainly surprised.